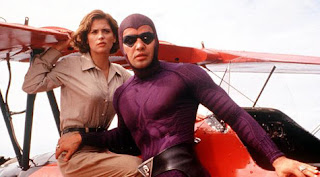 
THE 1996 PHANTOM, the first major production with the Lee Falk character since the 1943 serial, was a better imitation of RAIDERS OF THE LOST ARK than most of the outright Indiana Phonies. While PHANTOM was obviously not as expensive a production as RAIDERS, the stunts and the costumes were generally impressive, and Billy Zane played the hero with a witty insouciance that summed up the optimism of the early 20th century.

The story is based loosely on the opening sequences of the 1936 comic strip, summarized here. The 1996 film doesn't dwell very long on the origin of the Phantom line of heroic adventurers, nor upon, even in 1996, the Bengalla natives' superstitious belief that the Phantom is immortal. But like the comic-strip sequence entitled "The Singh Brotherhood," the modern-day hero is faced with the recrudescence of the Singh Pirates of Malaysia, whose lawless ancestors killed the father of the man who would become the first in the line of Phantoms. But, in contrast to the comic strip situation, the Singhs are not the main villain here. Rather, the script places more emphasis on a group of American villains, led by flamboyant entrepreneur Xander Drax (Treat Williams). Like the Nazis who pursued the Lost Ark, Drax seeks the power of antiquity, though in this case he has to gather three artificially-made skulls that, when joined, can summon phenomenal supernatural power. The Phantom learns of this plot in his Bengalla jungle, but before he can journey to America to pursue the plotters, his future girlfriend Diana Palmer (Kirsty Swanson) comes into the mix.

Diana, the rough-and-ready daughter of a newspaper tycoon, journeys to Bengalla to investigate a connection between Xander Drax and the cult of the Singh Brotherhood. Drax learns of her mission, and, apparently fearing that she'll find out something, creates considerable fuss by having a squadron of female pilots ambush Diana's flight and take her prisoner. This all-girl squad, led by the insidious Sala (a coquettish Catherine Zeta Jones) appeared in the early strip "The Sky Band" and had no connection to any other villains, Sala and Diana have a case of "hate at first sight," but because Sala's airbase is located (very conveniently) in Bengalla, the Phantom comes to Diana's rescue. To be sure, they've met before, since in college Diana dated the hero in his mufti identity as "Kit Walker," though she certainly doesn't recognize him with his mask and purple outfit.

Diana drops the original plans for her investigation and flies back to New York, and the Phantom does the same, dressed as Kit Walker. The two meet again and pursue a lead to one of the skulls at a local museum (also rather convenient), just as Xander and his thugs show up  Despite the hero's attempt to interfere, Xander assembles two of the magic skull-artifacts, which happily are able to project a modern-day map that tells him where to look for the third item. This leads the Phantom and Diana to enjoy a final battle with Xander's forces and the Singh cult, though the good guys receive some aid from Sala, who switches sides in a manner not unlike Pussy Galore in the GOLDFINGER book.

Aside from the script's tendency to arrange plot-developments for the writer's convenience, the film's biggest weakness is that of "too many crooks spoil the broth." Early scenes suggest that the Phantom's going to contend with the Singh, since there are so many references to their mythology, but Xander, a road-show Lex Luthor, gets most of the screen-time, and a late appearance by Cary Hiroyuki-Tagawa as the Singh leader proves small compensation. The threat of the magic skulls is never adequately developed, and so the main appeal is that of some decent fight-scenes, Zane's nice-guy superhero and some fetching females in Swanson and Zeta Jones. The script does at least include all the major parts of Phantom lore-- his horse, his pet wolf, his jungle-cave, and his "Phantom ring," though I didn't care for the script giving the ring a special role in the resolution of the helter-skelter story. But I rate the mythicity as "fair" because the movie does capture the feel of a simpler, more adventurous era.

Posted by Gene Phillips at 4:13 PM
Email ThisBlogThis!Share to TwitterShare to FacebookShare to Pinterest
Labels: combative adventures, the marvelous