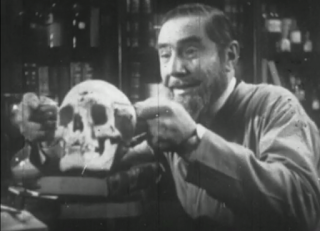 
Even though THE PHANTOM CREEPS recycles a lot of its fancy gimmicks and its exciting score from earlier works, like 1936's FLASH GORDON and 1939's SON OF FRANKENSTEIN, it still has the distinction of being the best of Bela Lugosi's five serials.

Given that at the time the actor still possessed the cachet of having appeared in A-level films, the opening chapters of PHANTOM make an effort to capitalize on Lugosi's acting prowess. Though in many ways Doctor Alex Zorka is a standard world-conquering mad scientist, Chapter 1 establishes that he has a faithful, age-appropriate wife, and though he doesn't let her fears about his madness deter him from his course, he does make an effort to keep her with him. The script disposes of Mrs. Zorka within a few chapters, but devotes a telling scene to Zorka attempting to control his emotions when he beholds her deceased body.

Like a lot of serials, this one is very loosely plotted, but this helps keep the focus on action and wild inventions. Lugosi has a veritable cornucopia of science-fiction gimmicks-- miniature spiders that can plunge victims into comas, an electric ray-gun, a giant robot and an invisibility belt. The latter is the reason Lugosi sometimes refers to himself as "the Phantom," though most of the time his enemies call him "Zorka," since there's no mystery as to his identity. Though I didn't catch any pertinent WWII references, PHANTOM like many serials of the 1930s relates the mad scientist's struggles for dominance to the dangers of foreign espionage. Zorka's newest invention, a gas that can immobilize armies, is derived from elements taken from a meteor fragment (illustrated by footage taken from Lugosi's earlier Universal film THE INVISIBLE RAY). Thus the meteor-element becomes the bone over which the various dogs-- various American lawmen, foreign agents, and Lugosi and his henchmen Monk-- continually struggle throughout the chapterplay.

I don't often devote much time talking about the villain's henchmen in serials, but I'll note that Monk, as played by Jack C. Smith, provides Bela with excellent reinforcement. Monk, a slow-witted though occasionally crafty career crook, doesn't just stand around listening to his boss wax poetic about his world-conquering plans. Rather, Monk is forever griping about how he's going to get sent back to prison because Zorka keeps all of the good "toys" for himself. In response, Zorka constantly threatens Monk with dire fates for complaining, not least siccing the giant robot, "the Iron Man," upon the hapless hood. Since this robot is, like most of those in serials, is just a man in an unwieldly suit, the Iron Man doesn't appear often, but he makes a formidable presence despite his bizarre appearance. In any case, the Zorka-Monk relationship is so chancy-- you never know if Monk will definitively betray his employer and get snuffed-- that it's much more compelling than the relationship between the vanilla military intelligence hero (Robert Kent) and the plucky girl reporter assisting him (Dorothy Arnold). In terms of casting there's even a shout-out to the 1931 DRACULA in that Edward Van Sloan has a small role, though no scenes with Lugosi.

Lugosi's forceful performance as a monomaniac ("They cannot destroy [the meteor] any more than they can destroy me") and the scientist's many gimmicks are the serial's main assets. There are a satisfactory number of action-scenes, with more emphasis on chases than on fights, but the only standout is the concluding scene, when Zorka and Monk take to the skies in a biplane. While Monk pilots the plane, Zorka, laughing fiendishly, hurls super-explosive bombs to the earth, where he destroys a number of stock-footage targets (including, I note with perverse amusement, the Hindenberg) before meeting his inevitable end.

Though I have to give the serial's mythicity a low rating even on its main sociological theme, PHANTOM CREEPS stands as one of the best villain-centered chapterplays, perhaps excelled only by THE DRUMS OF FU MANCHU.
Posted by Gene Phillips at 2:53 PM
Email ThisBlogThis!Share to TwitterShare to FacebookShare to Pinterest
Labels: combative adventures, the marvelous