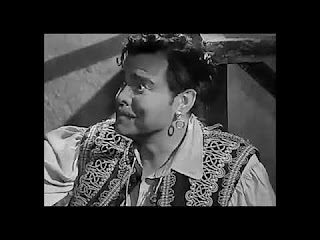 Okay, I just had to write that line, even though it's not literally true. To be sure, at least one intellectual, Antonio Gramsci claimed that the character Welles plays in BLACK MAGIC-- the character of Cagliostro, as fictionalized in Alexandre Dumas's 1846 JOSEPH BALSAMO-- to be an example of a 19th-century "superman." But Cagliostro, a.k.a. the gypsy hypnotist Joseph Balsamo, uses his unique gifts for evil, and thus BLACK MAGIC can be accurately described as--

BLACK MAGIC begins with half of a frame-story, not unlike that of 1935's BRIDE OF FRANKENSTEIN, in that the frame starts out with author Alexandre Dum as talking about how his great creation Cagliostro seemed to escape him. However, the film ends without returning to Dumas.

Welles, then forty-four years old and not yet as heavyset as he would become in future decades, plays Joseph Balsamo as a crafty gypsy whose people have been perpetually mistreated by the non-gypsy populace of France. As a child Joseph saw both his mother and father executed by the will of a petty nobleman, Montagne, because Joseph's mother predicted a child's death and was therefore accused of being a witch. Child Joseph is spared when his fellow gypsies rescue him from the French soldiers, but vows vengeance on Montagne. Years later, when Joseph has become an adult, he develops a rude version of hypnotic skill, and the real-life French physician Doctor Mesmer (founder of "mesmerism") sees Joseph demonstrate his powers. Mesmer wants Joseph to hone his talents so that the two of them can use hypnotism in medical treatments. Joseph, who's never given his ability much thought, realizes that if he can impress this wealthy gadjo, he can impress others, and so he rejects Mesmer's offer.

Years later, Joseph has assumed the name of Cagliostro, and has garnered fame and wealth through alleviating people's ills with the power of suggestion. This fame brings Joseph back to his long deferred desire for vengeance, for the nobleman Montagne summons Cagliostro to treat a comatose young woman, Lorenza. Joseph represses his desire for immediate revenge, studies Lorenza and realizes that she's a dead ringer for Marie Antoinette, who will ascend to the rank of France's queen when her husband's father Louis XV passes on. Since Lorenza is useless to Montagne unless Joseph can release the woman from her coma, the ambitious gypsy deals himself in on the plot of Montagne and his co-conspirator Madame DuBarry, which involves a complicated scheme to defame the queen.

As part of the deal, Montagne has to get the famed "Cagliostro" an invitation to attend the court of Louis XV. Local Parisian doctors arrange a hoax to expose the supposed healer's fakery, by presenting Joseph with nobles dressed up like suffering wretches. But Joseph has the last laugh, for after the court's had a good guffaw at his expense, the hypnotist places one of the impostors under his mental control, forcing the unwilling nobleman to act like a dog. This impresses Louis XV and awes the court, though this doesn't help Joseph much when, some days later, the current king dies and Louis XVI ascends to the throne. Marie Antoinette doesn't like the alleged healer, so Joseph and Montagne initiate their plan to embarrass the queen, which in a roundabout way is supposed to bring them great temporal power.

On a side note, though Joseph does bring Lorenza out of her coma, he also falls in love with her, and keeps her under his psychic thrall. However, Lorenza has an age-appropriate love, Gilbert of the royal guards, and Joseph eventually hypnotizes the young woman into marrying him, the better to discourage the young swain.

Though the plot proceeds to some extent, Joseph and Montagne are both accused of conspiracy. Joseph easily escapes jail and for good measure forces his old enemy to commit suicide. However, eventually Joseph/Cagliostro is brought to trial, though the authors of the villain's downfall are both Gilbert and Joseph's short-lived mentor Mesmer.

I skimmed the ending of Dumas's BALSAMO-- which probably is no better a rendering of historical fact than BLACK MAGIC-- and I'm reasonably sure the book doesn't end in as combative a manner as the film, which boasts both a hypnotist-battle between the villain and Mesmer and a sword-fight between Joseph and Gilbert. Wikipedia mentions that both Welles and director Gregory Ratoff rewrote the script credited to two other writers, and I would guess that someone behind the scenes wanted BLACK MAGIC to conform to the model of Dumas's best known work, THE THREE MUSKETEERS. Rumor has it that Welles directed parts of the film, but though MAGIC is a better-than-average swashbuckler, its direction isn't all that distinguished. The film's greatest significance may be as a possible inspiration to the Marvel supervillain Doctor Doom. Doom's origin, analyzed here, starts with Doom as a gypsy boy whose dead mother actually was a witch, after which the future supervillain grows to manhood, confounds the local nobles with his scientific wizardry, and eventually rules the country-- only to fall victim to a fate closer to that of Dumas's MAN IN THE IRON MASK.

Posted by Gene Phillips at 3:10 PM
Email ThisBlogThis!Share to TwitterShare to FacebookShare to Pinterest
Labels: combative adventures, enthralling hypnotism and illusionism (u), the uncanny