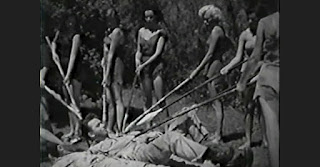 
I saw UNTAMED WOMEN over twenty years ago, and barely remembered anything about it. The flick's reputation on IMDB and elsewhere is that it's just another cheap "prehistoric women in modern times" B-flick. One review claimed it didn't even rate that high among the best of the "so bad it's good" movies.

Certainly UNTAMED can't boast any great creative pedigree. This was the only metaphenomenal film directed by W. Merle Connel, a raconteur best known for fifties grindhouse fare like TEST TUBE BABIES and THE FLESH MERCHANT (though he contributed cinematographic work to THE UNEARTHLY and THE CAPE CANAVERAL MONSTERS). Writer George Wallace Sayre worked exclusively in B-level fare. with his best known metaphenomenal credit being 1939's THE MAN THEY COULD NOT HANG, though his best script might be NEARLY EIGHTEEN, a 1943 Gale Storm comedy vehicle.

And certainly Sayre's concept of an amazon society is no better than it has to be. Following the opening part of a frame-story related by Steve Holloway, the only survivor from a lost bomber-plane, Sayre and Connell depict Holloway and three other survivors set adrift after their plane's shot down. The four men find their way to an island rife, like King Kong's skull-shaped domain, with prehistoric creatures. A few of them are recycled from ONE MILLION B,C, though as far as I can tell, the giant armadillos are a new touch.

However, like the title says, the "Untamed Women" present the story's main problem. Certainly it's risible when Sayre's script tells us that these young women are the survivors of a colony of Druid pioneers, not to mention that all of the women speak perfect English, albeit sprinkled with an occasional "ye" or "thou." Moreover, some of these spear-wielding babes have archaic-sounding cognomens like Tennus and Valdra, while others have modern names like Myra and Sandra (the latter being the name of the tribe's high priestess).

In addition, Sayre also seems to be going for something like Edgar Rice Burroughs' "Caspak" books, wherein tribes from different time-frames converged without much rhyme or reason. Though the colony has apparently remained hidden from other civilizations since the days of ancient Rome, within the last few years the tribe's men were all wiped out by an invasion of "Hairy Men" from some other island. While the Untamed Women are wear cute cavegirl cutoffs, the Hairy Men, when seen at the conclusion, look like rude, crude, and extremely lewd Neanderthals.

Yet, despite all the absurdities of the setup, I felt like Sayre and Connell were trying to give the viewer a good ride for his buck. Though the concept is set up to give the modern males a chance to come to the defense of the lissome cave-ladies, Sayre goes in some interesting directions. While most of the women are instantly captivated by the new arrivals-- showing an admirable commitment to monogamy by suggesting that they all draw lots for their future husbands-- high priestess Sandra tries to get rid of the guys by sending them into the "Valley of Monsters." It's not entirely clear why she does so, though one of her lines-- describing soldiers as men who "attack, kill, enslave and exile" the people-- suggests that an early encounter with the Hairy Men embittered her against the male gender. The average "amazon society" would venture to reform the pissed-off matriarch by having the modern-day "alpha male"-- in this case, Holloway-- introduce the high priestess to true love. But though we see a few sparks between Holloway and Sandra, they get no romantic scenes, which are left to the other three guys after the women rescue the men from one of the giant dinos.

The Hairy Men invade, and get routed by the servicemen and their guns. However, Holloway points out that ammunition is limited and that sooner or later, the bad cavemen will win. As if to keep the villains from enjoying total victory, the cave-girls pray to their sun god, who apparently causes a local volcano to erupt and wipe out the whole island, thus giving the Amazons a sort of pyrrhic victory. Only Holloway survives in the same life-raft that brought him to the Untamed Island, and the film ends in real time, with his testimony getting validated by a handy archaeological expert.

Connel's direction is actually pretty good within the limits of his budget, and the actors, mostly minor players who were never even modest "names," generally play the melodrama straight, to reasonably decent effect. There are, to be sure, some goofy lines in the script, the best being "Shoot anything with hair that moves." Yet I think Sayre was pretty creative overall in his take on the Amazon-tribe trope. Though these cave-babes aren't nearly as tough as the WILD WOMEN of the previous year, Sayre keeps working in asides about powerful women  Holloway's story begins with his doctor asking him about "Lucy," who turns out not to be a flesh-and-blood woman, but Holloway's bomber-plane, given more female associations in that its bombs are called "eggs" by Benny, the film's comedy relief. This denizen of Brooklyn also voices a lot of gynophobic remarks, remarking that the Amazons want to turn all the men into "hors d'oeuvres," or talking about he got his ass kicked on a date with a female "wrassler." There's a brief reference to a sacrificial Druid altar, though nothing comes of this. Most interestingly, Sayre devotes several minutes to the Oedipal complex of one guy, Ed by name. After unburdening himself to Holloway about how his mother tried to run his life and keep him away from other women, Ed walks out into the jungle by himself. He pulls out a photo of his mother and casts it to the ground. However, he thinks better of the action and re-pockets the photo-- at which point he's attacked by a man-eating plant that engulfs his face within its leafy fronds. I'm sure the actor doesn't struggle because he would've torn up the phony plant-creature just by breathing hard. But for the character Ed-- whose name even sounds like that of Oedipus--, getting almost smothered by a man-eater seems almost like poetic destiny.

Posted by Gene Phillips at 2:35 PM
Email ThisBlogThis!Share to TwitterShare to FacebookShare to Pinterest
Labels: the marvelous