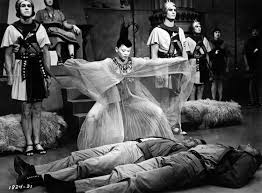 THE MOLE PEOPLE is not so much the proverbial “silk purse made from a sow’s ear,” as it is a silk purse improbably stuck into a sow’s ear. By that I don’t mean that the directing of Virgil Vogel and the acting of the principal players prove to be as ghastly as some pig’s body-part. But both the performances and the direction remain essentially workmanlike and undistinguished. Lazlo Gorog’s script is the real star of this Universal venture into the “lost civilization” subgenre.

A lot of movies have formulated their own modern myths. However, it’s a rare film that manages to successfully translate the myths of ancient times. Lost civilization stories usually come up with societies made of a hodgepodge of Graeco-Roman motifs. In contrast, Gorog does his best to make THE MOLE PEOPLE a homage to the Babylonian deity Ishtar (called Innana by the preceding culture of the Sumerians). Though there are a few technical inaccuracies in Gorog’s fictional treatment of the goddess, Gorog comes closest to capturing the multivalent symbolism present in archaic cultures.

Though MOLE PEOPLE was not the first American film to deal with a version of the “hollow earth”theory, the film begins with a scientific lecturer elucidating the theory for the audience’s benefit. The lecture’s main points of interest is its validation of inner-earth fictional tales with reference to religious narratives concerning descent into the land of the dead-- appropriate in the case of THE MOLE PEOPLE, whose lost race is metaphorically a culture of the living dead. The lecture mentions both Dante’s Inferno and a similar descent-story featuring the hero Gilgamesh.
Yet surprisingly, the lecture  does not mention that Ishtar—the deity who dominates the main
narrative—is particularly famous for descending into the death-realm of her goddess-sister Ereshkigal. But then, in the film proper, the script’s concept of Ishtar is covalent with the mountain in which the lost race endures, which may be why the lecture-sequence concentrates on images of mortal men descending into a feminine-gendered underworld.

Unlike various mummy-films in which the tombs of the dead never wish to yield up their secrets, the Himalayan mountain Kuhitara sends tokens of invitation to those who venture close. In this case, the explorers comprise an American archaeological expedition. The scientists-- four in number, though only Bradley (John Agar) and Belliman (Hugh Beamont) are principal characters-- are investigating the possibility that Sumerian emigrants, escaping the devastation of the Biblical Flood, may have traveled to the great mountains to found a colony. None of the scientists expect to find anything but relics of those ancient denizens. The archaeologists first discover a cuneiform siele written by an ancient Sumerian king, promising doom to intruders. But before the foreigners even have the chance to trespass, an earthquake—which one of the scientists humorously associates with Ishtar—shakes the entire camp and destroys the stele. However, the quake also unearths an ancient lamp, on which the chronicle of the emigration is related. This second relic encourages the archaeologists—Bradley, Belliman and the other two-- to explore the mountain’s summit. Once there, a third relic, disclosed by a convenient avalanche, points the way to the abandoned portal of an archaic temple. Yet Ishtar-as-mountain proves so impatient for the modern men to trespass on her domain that the ground swallows up one of the scientists. This forces the other three—Belliman, Bentley and Lafarge-- to go on a spelunking journey to rescue the lost man. The lost scientist perishes in the fall, and Lafarge doesn’t live much longer than it takes for the scientists to discover a living Sumerian city beneath the mountain’s rocky exterior.

Up to this point Gorog is clearly drawing upon the Biblical story of the Flood, in which Noah’s Ark eventually comes to rest on a mountain, after which both human and animal denizens stream forth to repopulate a destroyed world. But Gorog's Sumerians offer not rebirth but stasis, in keeping with the majority of lost civilizations ever since Rider Haggard invented the subgenre,
The people within the mountain, who both keep slaves and are enslaved to their superstitions, no longer have any concept of a world outside their domain, believing that everything beyond their borders is the heavenly terrain of Ishtar. The ruling class is a race of albinos, due to their long exile from sunlight, and they are served by humanoids with claw-hands and mole-like features, the “Mole People” of the title. Belliman and Bentley never devote any time to wondering how, even in two thousand years, human beings could have ever taken on such theriomorphic shapes—but perhaps that’s because the moment the scientists are captured, the albino people try to kill them as demons. Only the fact that Bentley has a flashlight—whose radiance can blind both the albinos and the Mole People—keeps the explorers in one piece. The Sumerians honor the three scientists as emissaries of Ishtar, and when Lafarge dies in a mishap, the other two have to cover for his death by claiming that he returned to the goddess.

During this time of relative safety, Belliman and Bentley learn the ways of their worshipers/captors—how they eat and make clothes-- though again, nothing much is said about how the Mole People, known to the albinos as “the beasts of the dark,” came into being. The mole-men—who presumably have females, though none are clearly indicated—harvest mushroom-crops while being lashed by cruel overseers. It’s not clear if the Mole People eat mushrooms as well, though they do consume meat, since at one point they’re accused of despoiling an albino corpse. The albinos are dependent on the Mole People to harvest the crops, which suggests a rewriting of H.G. Wells’ Eloi-Morlocks trope, one in which the effete Eloi maintain control over the cannibalistic brutes. Further, though the albinos worship a goddess, none of the few women seen have any high status, and the only female character, the handmaiden Adad, is despised for being a throwback, having non-albino coloration. Bentley becomes friendly with Adad, and tries to teach her about the freedom of the individual and the wonders of the outside world. She, for her part, does not take long to realize that the two scientists are not gods—but neither does high priest Elinu (Alan Napier), who gets the idea of stealing the flashlight from the supposed “emissaries.”

Before the conflict between the newcomers and the old guard heats up, the script devotes considerable time to working out the system of worship. Ishtar is the mountain in which the albinos live, but she is also “married to the spirit of this world.” She is also the heavenly world beyond the limits of the mountain, and though the albinos have no concept of the sun as such, they reduce their surplus population by hurling sacrificial victims into “the Eye of Ishtar." This means exposing them to sunlight in a sacrificial chamber, so that the sacrifices burn to death. High priest Elinu presides over the executions by invoking a chevron-like symbol, called “the golden rod,”which seems to be a sort of stylized image of a thunderbolt, embodying the sun’s destructive power.

Despite the fact that the albinos are the only living humans still worshipping Ishtar, one gets the impression that she’s invited the scions of modern humanity into her bailiwick in order to ring down the curtain on this corrupt and backward society. Belliman and Bentley don’t confine their emancipatory sympathies to Adad, for they also defend the Mole People against Sumerian cruelty. This indirectly emboldens the monster-men—who possess rudimentary reasoning-powers—to rebel against their masters at last. Ironically, Belliman, Bentley and Adad are spared this violence because they’re sentenced to the sacrificial chamber, where the sun’s radiance has no negative effect upon their non-albino flesh.

However, in the end Ishtar proves to be a jealous god. From the sacrificial chamber the scientists and the ex-handmaiden escape to the surface of the mountain. Yet one last tremor panics Adad, so that she turns, like Lot’s wife, to look back at the place she came from. Adad, instead of getting turned into a pillar of salt, is crushed to death by a falling pillar of the temple’s exterior. Thus, even though two of the four delvers into ancient mysteries are allowed to return to the living world, the world of death claims its last daughter. It’s a conclusion that somewhat undermines the dominant reformatory spirit of the 1950s, insisting that the people of primal times cannot transition into the world of fast food and airplanes, but must, like the goddess, pass back into the domain of fable, legend and myth.

Posted by Gene Phillips at 11:12 AM
Email ThisBlogThis!Share to TwitterShare to FacebookShare to Pinterest
Labels: the marvelous