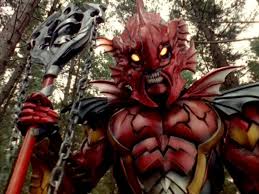 
I keep a weather-eye on the ongoing "Power Rangers" serials, most of which tend to run together after a while. This one-year series, like all the others, combines new footage with Japanese scenes taken from various incarnations of the "Super Sentai" concept. The successful first series, "Mighty Morphin Power Rangers," was the only one in which the producers filmed some better-than-average fighting-stunts for the original footage, while later entries have offered less innovation in the stuntwork department. In general the English-language serials' main virtue of the serials appears in the Japanese scenes, where the Japanese scripters and costumers come up with some truly demented visual concepts for the Rangers' villains.

MYSTIC follows its "Sentai" model by hypothesizing a new set of Rangers who depend on a fusion of technology and mystic powers. The five "clean teens" of MYSTIC receive tutelage from a Celtic-looking sorceress, but their enemies look like the same old goony aliens, albeit with supernatural overtones. In fact, the main reason I searched through the series was because TV Tropes claimed that the season qualified as a "monster mashup" on the basis that some of the aliens have aspects of (a) a werewolf, (b) a mummy, and (c) a Creature of the Black Lagoon (seen above, all in red). If MYSTIC had really built up this concept, consistently making its aliens close analogues to familiar monsters-- be they the Universal fiends or science-fiction freakazoids like those of MONSTERS VS, ALIENS-- then I would consider that a genuine mashup. But the monstrous facets of the various Ranger-enemies are very minor, and at no time did I consider any of them to be anything but "villain-types."

Though some "Rangers" serials maintain some steady subplots, MYSTIC's plotting is erratic at best. The first two-thirds of the serial waste a lot of time with wimpy opponents, and a boring subplot about one of the Rangers finding his parents during the various imbroglios. Only in the last third of the show does the script introduce a set of villains called "the Ten Terrors," who almost have a Lovecraftian Old-Gods vibe once or twice (possibly because the Japanese originals were some sort of Old Gods). But because these somewhat interesting foes are introduced so late, the scripts have to burn through them quickly.

The psychological function comes down to the teens confronting and solving various simple problems, but this is better done than MYSTIC's bland treatment of visual and narrative tropes from various magical systems.


Posted by Gene Phillips at 1:48 PM
Email ThisBlogThis!Share to TwitterShare to FacebookShare to Pinterest
Labels: combative adventures, the marvelous