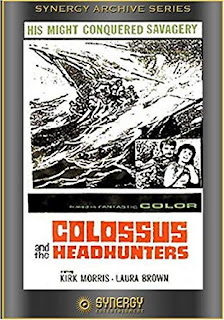 
Here we have two Italian "Maciste" films linked only by the idea of giving the hero the name "Colossus" in the titles. As was common for these films, Maciste appears at random in different time periods, with no connection between any of his adventures.

HEADHUNTERS' only virtue is that, because it's so dull, it made an above-average episode of MYSTERY SCIENCE THEATER 3000. Without the jokes, though, it's a dreary affair, though of minor interest in breaking with some of the standards of the template.

Usually, Maciste or one of his duplicates wanders into the midst of some dispute between two cities, takes the side of the righteous, and helps overcome the rulers of the unrighteous domain. Here, just as a volcano threatens to destroy the civilization of a more or less Greek-sounding island, Maciste shows up out of nowhere and leads the inhabitants to board a handy ship and escape annihilation.

Once Maciste and the island-people make landfall, they're almost enslaved by a nomad tribe, ruled by Queen Amoa (Laura Brown). However, Amoa's no standard "bad queen." She and her people are simply guilty of bad judgment, as they've been forced to flee Kermes, a renegade member of their tribe who enlisted the titular Headhunters as his henchmen. Maciste is tempted to help the sexy queen with her problems, but first he endeavors to get the islanders to safety. However, Kermes and his head-hunting buddies are aggressive enough to pick fights with both sets of good guys, thus solving Maciste's great moral quandary.

Both the photography and stunt-work here is tedious in the extreme, and although Kirk Morris made a good muscleman-hero in other peplum-films, he just barely performs enough strongman-feats to edge this flick into the realm of the uncanny. The Headhunters are no help here, since the film tells the viewer nothing about their weird society. The only other point of interest is that Amoa is one of the more active heroines, though she just has two or three short scenes of swordfighting. 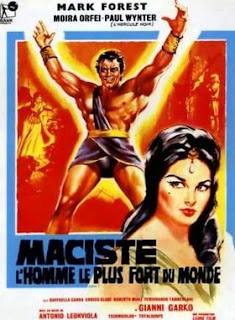 COLOSSUS OF THE ARENA, set in ancient Rome in the period of the gladiators, is far more entertaining in every way, though Mark Forest's Colossus/Maciste seems here to be an ordinary muscleman. Indeed, ARENA sports a scene in which the main hero actually gets beat up by seven other boulder-shouldered bad guys. This in itself may be deemed a marker of the film's comparative naturalism, even though later on the hero gets to clobber five of his former foes in one big saloon-battle.

The main thrust of the plot involves a nasty plotter seducing Revia, sister of the reigning queen Thalima, so that he can overthrow the rightful ruler. This doesn't sound too much like any historical version of Rome, but I feel sure that the audience of the time allowed Maciste a lot of leeway. The plotter also enlists the seven gladiators-- including both an African and a Mongolian-- to do some of his dirty work. One gladiator (Dan Vadis) ends up siding with Maciste, though this subplot proves of less interest than the one involving the royal sisters. It's incredible that Revia thinks she can depose her sister without running the risk of Thalima's being killed, but putting that aside, the two actresses, Scilla Gabel and Jose Greci, provide a satisfactory helping of pulchritude.