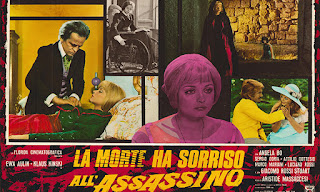 DEATH, while always visually impressive, seems to be an uneven crossover of the giallo genre launched in the sixties with the various proto-slashers of the seventies, such as Bava's 1971 BAY OF BLOOD. D'Amato shows absolutely no interest in maintaining even the skeletal outline of a detective-plot, such as one sees in the seminal giallo BIRD WITH THE CRYSTAL PLUMAGE. Instead, D'Amato jumbles together an assortment of tropes from various classic horror-stories, and concentrates only upon their emotional and kinetic appeal. To this end the director makes heavy use of vertiginous photographic angles and zooming camera-work, and, of course, more than a fair amount of sex.

The story throws a few fragmentary setup-scenes at the opening, though few commercial films have ever devoted so little exposition to similar scenes. In 1906 a brother, Franz, mourns his dead sister Greta, and we're apparently in his head as he remembers a few past events. Franz is seen attacking Greta sexually, but her attitude in the next flashback-scene is ambiguous: Greta allows her brother to chase her playfully through the countryside. She stumbles across a rich fellow, Doctor Van Ravensbruck, and then smiles coquettishly at her brother as he watches Greta chat with the older man. Later it will be suggested that Greta not only had sex with the doctor but also died of a miscarriage as a result.

Three years later, the previously dead Greta has an accident near the estate of Walter Von Ravensbruck, fully grown son of the doctor, and his wife Eva. The wealthy couple take her in so that she can recover from her apparent mishap. Family doctor Sturges examines Greta and just so happens to recognize signs on her body that remind him of a strange Incan ritual for bringing back the dead. But he doesn't suspect the full truth: that Greta is a revenant brought back to life by her brother's combination of Incan sorcery and modern science. Both Walter and Eva fall in lust with beauteous Greta and become extremely jealous of her attentions/

The supposed scientific elements have no real influence on the story: in essence, Greta is both zombie and witch, able to survive murder-attempts and to return the favor with sorcerous curses. (In the film's most memorable scene, she tosses a bouquet of flowers at her lascivious brother, and the bouquet turns into a black cat that claws Franz to death.) D'Amato works in yet another Poe-reference when spiteful Eva tries to kill Greta behind a wall of bricks, but Greta easily escapes and executes Eva in a scene reminiscent of "Masque of the Red Death." Even the name "Ravensbruck" may be something of a Poe-quote. Greta kills various other victims, and according to a review one of them is the original person who wronged her, the older doctor, but frankly I couldn't keep track.

Greta's combination of innocence and malevolence is conveyed by Ewa Aulin of CANDY fame, while top-billed Klaus Kinski collects his check for the supporting character of Sturges.


Posted by Gene Phillips at 2:57 PM
Email ThisBlogThis!Share to TwitterShare to FacebookShare to Pinterest
Labels: the marvelous