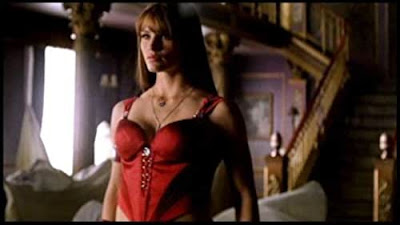 Any cinematic adaptation of a previously existing narrative is bound to diverge from the original in assorted ways. On occasion, the adaptation can stray from the original so greatly as to make one wonder why the creators troubled to reference the supposed source at all. Nevertheless, there have many times when even an oppugnant adaptation can be interesting in its own right. The film SEVEN FACES OF DOCTOR LAO is a much more upbeat version of the dark and despair-filled source novel, but in the final analysis both works are enjoyable in their own respective ways.

In my recent re-screening of ELEKTRA, I didn’t find it as objectionable as I did when I saw in the theater on initial release. If I was just in the mood for a standard action-film and didn’t know anything about the comic-book character, I might have been moderately entertained. That said, both the direction by Rob Bowman and the script by three collaborators are extremely uninvolved and uninvolving.

I can see why some aspects of the original character would have seemed problematic, since Frank Miller’s Elektra is firmly grounded in Freudian psychology. I haven’t re-watched Mark Johnson’s 2003 DAREDEVIL, in which this version of Elektra (played both times by Jennifer Garner) both debuts and suffers a violent death. But I seem to remember that Johnson is at least modesty faithful to the comic book: that Elektra, lover of Matt “Daredevil” Murdock, becomes so traumatized by the tragic death of her father that her “Electra complex” is activated, causing her to explore the dark corruption of ninjutsu and to become a paid assassin. In the comic and in the DAREDEVIL movie, she varies between being a villain and a hero.

ELEKTRA leapfrogs over any complexities left over from the previous film. Though dead at the end of DAREDEVIL, Elektra's former mentor Stick simply revives the slain ninja-woman at the start of the movie, as if this was the sort of thing that he does all the time. (At least in Frank Miller’s world, if people come back from the dead, someone else’s life has to be sacrificed.) Stick stands for a coterie of “good ninjas” who are locked in eternal battle with a band of “bad ninjas,” the Hand, but although Elektra attempted to join Stick’s crusade, he cast her out due to some unspecified flaw. Her history from the previous film is naturally ignored, but even so it’s vague as to how Elektra subsequently became an assassin-for-hire. The film’s opening scene, in which Elektra easily penetrates a formidable task force in order to execute a crime-boss, is possibly the best single scene in the film. Yet it doesn’t give the audience any sense of Elektra’s current moral compass. Would she have been just as remorseless cutting down FBI agents guarding a key witness against the mob? It’s a question Bowman doesn’t choose to bring up.

Bowman’s film doesn’t say much about Elektra’s lost father, but rather emphasizes the early loss of her mother to terrorist action. This allows Bowman and company to elide all the stuff involving her romance with Daredevil, and to set up a situation where the heroine, who has no more emotional range than a Terminator, will have to assume roughly maternal duties in order to humanize her.

Elektra, despite being somewhat fatigued with the assassin game, accepts an anonymous commission for an unspecified killing, and to find out who here targets are, she has to take up residence in a remote forest in some vaguely northern locality. There she meets, seemingly by accident, a handsome widower named Mark and his precocious teen daughter Abby. Then the people who hired her—none other than the agents of the evil Hand organization—bring down the hammer by revealing that Mark and Abby are to be her targets.

Elektra refuses to let the evildoers manipulate her and so defends the two fugitives against a host of assassins, some of whom wield super-powers. (Two or three of these are also based in Marvel Comics characters.) The situation then becomes incredibly muddled as to the Hand’s motivations. At first it seems as if they wanted her to kill Mark and Abby so that Elektra would become converted to conscienceless evil. But then we learn that Abby’s precociousness extends to having nascent super-ninja abilities of her own, as if these were like genetically inherent mutant powers. Eventually I quit worrying about whether the plot made sense and just watched the fight-scenes, which were competent but not extraordinary. (I’d later learn that the movie was shot on an extremely tight schedule and that star Garner only reprised the character due to contractual obligation.) The film ends with a mawkish affirmation of Elektra’s buried humanity, which is so ham-handed that it almost cancels out all of the flick’s mildly enjoyable elements.

The film deservedly flopped, and some claimed that ELEKTRA poisoned the well for female-led superhero movies for a time. That’s surely an exaggeration, given that it’s always been difficult to find effective ways to use female leads in either superhero films or in mundane action-flicks. I don’t imagine that at any time there have been tons of female-centric action-scripts stuck in development hell, and despite all the movie’s faults, I find ELEKTRA innocent of that particular crime against art.

Posted by Gene Phillips at 3:47 PM
Email ThisBlogThis!Share to TwitterShare to FacebookShare to Pinterest
Labels: combative adventures, the marvelous