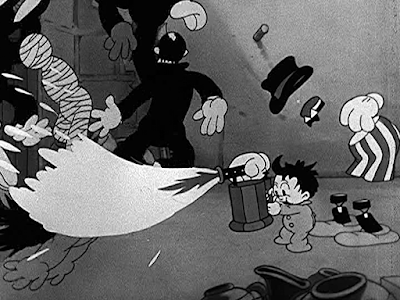 I've thought from time to time about including reviews of short theatrical cartoons, but here's my first such, thanks to a poster on CHFB who cited this 1934 cartoon as "the first monster mash."  As it happens, a 1933 Disney short, "Mickey's Gala Premiere," got there first, but it's not much of a "mash." "Premiere" is one of the many celebrations of Hollywood glitterati, and this one shows Mickey rubbing elbows with dozens of cartoony versions of famous celebs, including a quick shot of Dracula, Mister Hyde and the Frankenstein Monster grouped together.

In contrast, the monsters play a big part in "Wax Works" (which seems unrelated to the content of Paul Leni's silent 1924 live-action WAXWORKS). Oswald, manager of a wax works full of statues of historical figures like Napoleon and Groucho Marx (?), finds a baby in a basket left on his doorstep. Unwilling to be played for a chump-- "what will people think, knowing I'm a bachelor?"-- the reluctant rabbit puts the basket and its cargo back outside. However, the never-named baby gets out of the basket and appeals to Oswald for shelter. Oswald softens and takes the kid in, after which they go to bed together.

The toddler gets up and starts talking to the statues, which come alive and caper around for a bit. However, one of the monster-statues in the "Horror Chamber" seizes the kid, and he's duly horrified to find himself besieged by a group of fiends best known from their cinematic incarnations-- Dracula, the Frankenstein Monster, Mister Hyde, the Hunchback of Notre Dame, the Invisible Man, and an armless version of The Mummy (looking more like the forties Kharis than the 1932 MUMMY). One exception is the folkloric horror Bluebeard, making what may the character's only appearance in a monster-mash. The kid runs from the animated wax horrors, but gets hold of a blowtorch and turns Bluebeard to melted wax. He almost dissolves the rest of them as well, but the kid is disarmed and the evildoers cover him in wax. Oswald hears the boy's cries and comes to his defense, but he too is about to become a wax statue. At that point Oswald wakes up for real, for the whole thing's been his dream, brought on because the boy's been trying to wake him by dripping wax from a burning candle on him. Since the monsters and talking statues are all dreams, this would be an uncanny story were it not for the presence of a talking rabbit-guy.

Like most of the oeuvre of cartoon-maker Walter Lantz, there's not much more than basic gags here. Still, if this is the first full-fledged monster-mash, not counting the toss-off Mickey Mouse cartoon, then that alone gives the almost forgotten Oswald the Rabbit a cachet I for one never would have allotted to him. (And it's even a cartoon from Universal Studios, the people who gave the Classic Monsters their best treatments.)

Posted by Gene Phillips at 10:31 AM
Email ThisBlogThis!Share to TwitterShare to FacebookShare to Pinterest
Labels: the marvelous