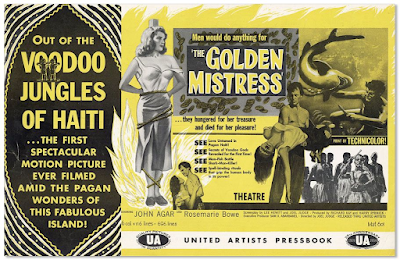 The above lobby card doesn't entirely lie: GOLDEN MISTRESS was filmed on the real island of Haiti, and voodoo does play a big role in the story (though most of the action takes place at sea, not in Caribbean forests, much less any "jungles.") It's certainly not a "spectacular" film of any kind, though actor/director Abner Biberman, under the name Joel Judge, succeeds at least in capturing much of the natural (but not necessarily "pagan") wonders of the terrain. However, the story is less wonderful, being padded with lots of location scenery and a pedestrian treasure-hunting plot.

Carl Dexter, an old explorer (Biberman), steals a small golden idol from a remote Haitian tribe known as "the Untamed." The people got that name because though they were brought to the Caribbean as slaves, they rebelled and became famed as raiders, before mysteriously disappearing from contact with other tribes. Carl tells his grown daughter Ann (Rosemary Bowe) that this small golden statue is one of hundreds consigned to a local lake near the haunts of the Untamed, and that they can be rich if they can obtain the treasure. However, someone among the Untamed is a voodoo priest, and Carl is struck down by a curse.

Ann, seemingly less preoccupied with treasure than with validating her late father's desires, seeks the help of a footloose treasure-hunter, Bill Buchanan (John Agar). Bill and Ann don't get along from the start-- he tosses her off his wharf, and she has him arrested-- but eventually they make nice and agree to collaborate on seeking the treasure.

When Bill and Ann visit a tribe with whom Bill is on friendly terms, more voodoo-inspired bad luck seems to dog the treasure-hunters' trail. In contrast to many similar films, there's not much doubt that the power of voodoo is real, but the script is not very curious about the religion's etiology, aside from showing a number of scenes of natives dancing around, possibly inspired by the voodoo deities. In one instance, though, when voodoo *may* be responsible for sending a shark after a native boy diving in the ocean, this works out well for Bill, who saves the boy's life and wins the help of the kid's father as a guide. (The arrangement doesn't work out nearly so well for the "redshirt" guide, though.) Eventually the script loses interest in mystic curses, and Bill and Ann fall into the hands of the Untamed, who plan to turn the treasure-hunters into two big weenie roasts. The duo escape death without the treasure, but by that time they've found true love.

The oddest thing about MISTRESS is that the voodoo stuff isn't clearly seen to emanate from one particular source, though there is a brief glimpse of a sorcerer in regular clothes, glowering after some character dies. Most voodoo films  place a great deal of emphasis on some magician as an opponent for the sympathetic characters, but here the curses just seem to happen whenever it's convenient for the script. Because the movie exploits the horror of voodoo so minimally, the Bill-Ann romance takes center stage. Bill performs some dauntless scuba-diving feats but there's so little real action that MISTRESS proves to be a subcombative adventure. Oh, and there's a cute kid who provides the usual lame kid-humor. Fans of John Agar and voodoo movies are the only probable audience for this curiosity.

Posted by Gene Phillips at 9:54 AM
Email ThisBlogThis!Share to TwitterShare to FacebookShare to Pinterest
Labels: subcombative adventures, the marvelous