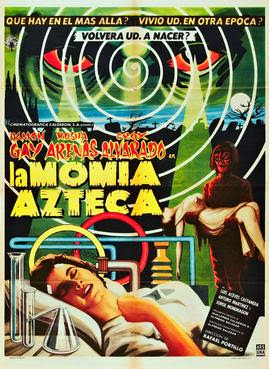 This film was the first of three "Aztec Mummy" films, all of which were shot at the same time on the same sets and with mostly the same casts. Like some of the other Mexican series-films at the time, whether about vampires or masked wrestlers, all three films seem to share a loose continuity. Allegedly Mexican studios were only licensed to shoot short films under these circumstances, so here we see director Rafael Portillo anticipating the much later practice of producer Alexander Salkind.

The main story is clearly indebted to both the Universal mummy- films and the then-current "Bridey Murphy" reincarnation craze. Mexican neuro-scientist Almada seeks to find a subject for his process of hypnotic regression, and he finds one in his fiancee Flor (Rosita Arenas). Under hypnosis the young woman spins a tale of Aztec times, when her previous incarnation Xochitl (also Arenas) was marked for sacrifice. However, a warrior named Popoca wanted to save her life, and tried to help her flee the Aztec priesthood. The lovers get caught, and after Xochitl is sacrificed, Popoca is given a drug that turns him into a guardian-mummy for a pyramid-tomb.

Flor returns to herself, though she suffers some strain after identifying with a sacrificial victim. She guides Almada and some fellow seekers to the tomb, where they unearth-- sans any archaeological tools or training-- the burial chamber of Popoca. Almada doesn't believe in the legend of the living mummy, so he takes away a breastplate from the chamber. However, Popoca then revives to protect the tomb-treasure, and he rises to seek out the thieves. The recrudescent warrior beholds Flor, and, mistaking her for Xochitl, takes her back to his tomb. At the confusing climax, he comes close to slaying Flor, possibly with the idea of making her into a fellow mummy, along the lines of the 1932 Karloff classic. However, Almada and friends rescue Flor and bury the mummy once more.

The oddest element of MUMMY is the presence of "El Murcielago," a dark-clad criminal who wears a face-mask like one of the villains from an American cliffhanger serial. "The Bat" really doesn't do anything in the story aside from lurking around, having somehow got the notion that he might be able to abscond with the tomb-treasure. I confess that I might have missed something justifying his presence, since I watched a Mexican DVD with no English subtitles. Still, the Bat becomes a much more significant presence in the next two films, so here his debut is in the nature of the "Phantom Zone Villains" who appear briefly in the 1978 SUPERMAN. It's because of the essential continuity of these three films that I label AZTEC MUMMY a combative drama, even though the mummy's one fight with the Bat's gangsters is not memorable.

As many other reviewers, Portillo takes a really long time to introduce the mummy, burning up a lot of scenes filming what I assume to be real Aztec pyramids. I give the film a fair mythicity rating only because it does capture a little of the feel of modern life being menaced by demons of the dead past.

Posted by Gene Phillips at 10:39 AM
Email ThisBlogThis!Share to TwitterShare to FacebookShare to Pinterest
Labels: combative dramas, the marvelous