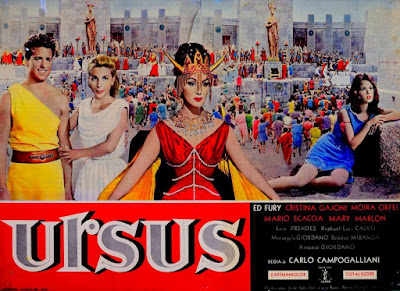 While the peplum-hero Ursus isn't all that well known today, he did have nine films to his credit. That's not bad for a hero whose name was allegedly borrowed from some minor supporting warrior-character in the film QUO VADIS.

Ursus (Ed Fury) exists in an amorphous Greek era, which can be surmised only from the character names and costumes. He's first seen returning to his homeland from a foreign war, and he soon demonstrates his strongman credits by defending the blind shepherdess Doreide (Mary Marlon) from some rowdies. Ursus and Doreide have known one another since childhood, but Ursus is only concerned with finding his former love Attea. However, he learns that she's been abducted by the warriors of an isolated island, where a cult of bloodthirsty sacrifice holds court. Everyone believes her dead, but Ursus insists on going to the island to find out for himself. Doreide, who clearly loves the big lunk without his catching on, persuades the hero to let her go along.

The structure of URSUS is unusual in that it's close to being a mystery. Usually in stories of captive brides or girlfriends, the viewers see the terrible act in which the woman is captured, so that they are stoked to see the hero go to her rescue. But URSUS has a reason for not showing what's happened to Attea, and for keeping her offstage for over half the film. Possibly some viewers might have caught on once Ursus finally arrives at the court of the ruler who sacrifices females to the local bull-god-- and the ruler is a woman wearing a mask (Moira Orfei). Sure enough, the mystery queen is none other than the missing Attea, who, rather than becoming a sacrifice, somehow wheedled her way into the hierarchy (possibly because one of the priests was in love with her) and then found herself eminently comfortable with sacrificing others.

Now, even if this version of Ursus had been totally naturalistic in his powers, the presence of the sacrificial cult alone would be sufficient to make this an uncanny film. And though I don't know of any archaic religions that sacrificed people to bulls-- leaving out the more legendary story of the Minotaur-- the concept of a bull-god leads to the film's best scene. Peplum films are full of scenarios in which the hero faces some huge beast, whom he slays with only a modicum of trouble. But when Ursus is thrown into an arena to fight a real and very enraged bull, the hero has a pretty tough time killing his bovine opponent. I don't mind the animal-killing fantasy in terms of sheer escapism, but the fact that Ursus gets knocked around quite a bit suggests that the filmmakers wanted to remind the audience just how powerful a big animal really is, in comparison to even a man with uncanny strength. Since Ursus does finally break the bull's neck, I would credit him with that level of power, but even the other action scenes don't become as far-fetched as many other strongman-flicks of the period.

Not surprisingly, the corrupted Attea meets a bad end, and Doreide is rewarded for her steadfast devotion to the hero-- which by itself represents a key psychological aspect of the subgenre. As peplum-pictures go, this is one of the better ones.

Posted by Gene Phillips at 1:29 PM
Email ThisBlogThis!Share to TwitterShare to FacebookShare to Pinterest
Labels: combative adventures, superlative skills (u), the uncanny, weird families and societies (u)