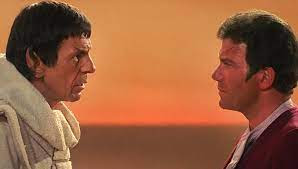 To recap my conclusion from the end of my WRATH OF KHAN review, it would appear that “the death of Spock” was revised into “the death and resurrection of Spock” during the filming of the second film. On top of that, SEARCH FOR SPOCK also fostered the resurrection of Leonard Nimoy’s career. It seems to be common knowledge that Nimoy’s directorial duties on the third and fourth TREK films were part of the deal for his reprise of Spock, whose death supposedly came about because the actor didn’t wish to play the pointy-eared Vulcan any more. In truth, Nimoy doesn’t play Spock in SEARCH for more than a few minutes, which once more places the bulk of the dramatic arc on Shatner’s Kirk, and, to a lesser extent, upon Kelley’s McCoy. The sidelining of Spock also gives the other legacy cast-members more things to do in the script, and some other sequels would follow suit in punching up the duties of the support-cast.

I can well believe that writer Harve Bennett had to do some serious rethinking to cope with the resurrection plotline, for SEARCH begins in a very fragmented manner. At the end of WRATH, Saavik, David Marcus and his mother Carol are all on the Enterprise as the starship leaves behind the coffin with Spock’s body on the newly created Genesis planet. The opening of SEARCH seems to pick up a short time later, with the ship returning to Earth for an overhaul. But since Kirk’s monologue mentions that many of the “trainees” from the crew have been “reassigned,” the logical implication is that somewhere along the way the Enterprise stopped at a starbase to offload the unwanted crew-members (not that any viewer would have noticed if the previous crew had stuck around). A starbase rendezvous would also provide a rationale for the disappearance of Carol Marcus, though not so much her near-total elision from the storyline. Saavik (now played by Robin Curtis) and David Marcus are said to be exploring the Genesis planet, though it will be some time before the viewer learns that they’re doing so with the help of an entirely separate starship, the Grissom—to which they logically would have transferred at a starbase. All of these excursions are designed to serve Bennett’s plot, though they don’t cohere well with a later development: that the Federation, having learned of the controversial creation of the Genesis world, attempts to lock down all information about the matter—which would be harder to do, if many of the witnesses are scattered about.

The Federation is more efficient in locking down the Enterprise itself, for during Kirk’s absence the bureaucrats have decided to de-commission the aged ship for good, thus continuing the “being old sucks” trope from WRATH. Upsetting as this kick in the teeth is to the returning heroes, it’s more daunting to learn that Doctor McCoy seems to be losing his mind, talking as if he himself is the deceased Spock and babbling about undergoing some ritual on Planet Vulcan. Soon enough, Kirk will learn that prior to suffering death, Spock left his “katra,” a sort of mental soul-construct, impressed upon McCoy. Apparently the Vulcan science officer did so with no expectation of resurrection as such, since in his last moments he doesn’t know his body’s going to be deposited on Genesis, or that the power of the terraforming magic is going to wreak changes on his body.

Saavik and David find out soon enough, though. Expecting to find only plant-life on the nascent planet, they beam down and find that the microbes upon Spock’s coffin have been unnaturally enlarged by the influence of the Genesis process. More importantly, the two explorers find the casket empty—shades of the empty tomb of the Messiah! Soon they find a Vulcan child of ten years’ age, and David concludes, rather handily, that the process has “regenerated” Spock. The reasoning is sloppy—did Genesis bring Spock back to life, reverse his age to childhood, and then start him on the course of rapid aging once more? The temptation is to believe that for some reason—possibly because of Nimoy’s directorial duties—the filmmakers didn’t want to simply resurrect Dead Spock. De-aging and re-aging him would seem to give the science officer a brand-new life, rather than unearthing a zombie Vulcan. However, a further wrinkle is that Kid Spock has no functioning mentality, implicitly because he’s missing the soul that Dead Spock transferred to McCoy.

Kirk breaks Federation regs to hijack the decommissioned Enterprise, using it to bring McCoy and his Vulcan baggage into contact with the empty shell of Spock’s rejuvenated body. But while the Federation people are on their errand of mercy, the Klingons, led by Kruge (Christopher Lloyd), have learned about Genesis, and they, like Khan before them, hope to weaponize the terraforming process. SEARCH is arguably the first film to strongly depart from the TV show’s dominant image of Klingons as “sneaky Russians” in order to build up the aliens’ image as fierce, uncompromising warriors. However, the Klingons in the film are still just superficial villains here, and Kruge in particular is a shallow character, despite Bennett’s attempts to give him gravitas. (In one scene on Genesis, Kruge outwrestles a hostile serpent-thing with sheer strength rather than killing it instantly with his ray-gun.)

The Klingons arrive at Genesis before the Enterprise. They destroy the Grissom and beam down to the planet to interrogate the two survivors and their Vulcan charge. However, the world is beginning to come apart at the seams, and David reveals that he secretly infused the terraforming process with a forbidden substance, “protomatter.” In effect, Bennett is obliged to recant the miraculous accomplishment touted by the script of WRATH. Genesis is no longer a godlike reshaping of brute matter; it’s a false deity brought into being by the hubris of Kirk’s callow offspring (Carol’s contribution also being ignored), and in the end-scenes the Genesis-world starts looking a lot more like Hell than Eden. Further, Kid Spock, because he was brought into being by Genesis, is vaguely bonded to the chaos of the planet. But since Kid Spock must live to become New Spock, David is sacrificed upon the altar of plot exigency. I don’t imagine anyone mourned the loss of his ill-defined character, but for Kirk the death of his only son is yet another body-blow—shortly followed by the destruction of his ship, the original Enterprise. In the next film, of course, Kirk will get a new Enterprise, and New Spock will get a second lease on life, purely thanks to David Marcus’s overreaching. But the intense drama of Kirk’s suffering—and to a lesser extent, that of his crew-members—provides such a strong catharsis that the rest of the film feels like an afterthought.

SEARCH is a decent enough film despite its muddled plotlines. Bennett might have increased the appeal of the climax had he given Kruge a more articulate character; as it is, the Klingon commander often seems erratic, acting purely to shore up plot-points. The rebirth of New Spock is adequately handled (though the star-turn of Dame Judith Anderson as a Vulcan muck-a-muck is a waste), and the film ends on a note of suspense akin to EMPIRE STRIKES BACK: how will New Spock cope with his predecessor's brave old world, and what will the Federation do to the renegade crew of the annihilated Enterprise?

Posted by Gene Phillips at 11:14 AM
Email ThisBlogThis!Share to TwitterShare to FacebookShare to Pinterest
Labels: combative dramas, the marvelous