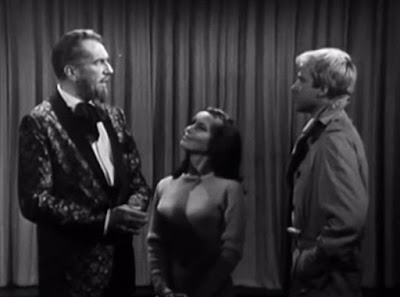 The actor Tommy Kirk passed away this week, which event caused me to scan through his IMDB credits to reminisce about his movie and TV work. I came across this curiosity and was able to screen it on Youtube.

WILD was a half-hour special on the music show SHINDIG. Aside from a short introduction, the whole show was devoted to a very condensed version of the movie being hyped by the special: DOCTOR GOLDFOOT AND THE BIKINI MACHINE. Wikipedia asserts that the movie was originally intended to be a musical, but that the songs were dropped. Given the focus of SHINDIG, it's not surprising that some or all of these songs are recycled into WILD WORLD, but they're all mediocre and unmemorable.

As in the two Goldfoot films, Vincent Price's world-conquering mad scientist is the star, while his sidekick is now one Hugo, this time played by AIP regular Harvey Lembeck. Goldfoot's main gimmick is that of churning out large quantities of shapely girl robots for purposes of espionage, though the TV-script leaves out the movie's idea that the robots seduce their lustful male targets and then assassinate the men by blowing up.

Having far more restricted time and sets this time, Goldfoot has only one dastardly plot: to capture Malcolm Andrews (Kirk), who is a U.S. government automaton loaded with assorted military secrets. But because the naive robot-boy is protected by Agent 00 1/2 (Aron Kincaid), Goldfoot sets a robot to catch a robot, sending a robo-girl named Diane (Susan Hart) to seduce Malcolm and lead him back to Goldfoot's lab.

For some reason the goofy Agent makes it easy for Goldfoot by taking Malcolm on an outing to the local park. Diane locates the two of them, but her circuits fire up for the trenchcoated agent, and she seduces him instead. Fortunately for the villain's designs, Hugo followed Diane to supervise, and he manages to talk Malcolm into returning to Goldfoot's place. When the Agent misses his charge, Diane helps him out by taking him to the lab as well. The only interesting thing about the climax is that Goldfoot orders his robo-girl to use her robo-strength the agent and the boy-robot. But in the tradition of many other "robots in love," Diane rebels and propels the villain and the henchman out of the room in a rather low-violence display. However, a coda allows Goldfoot and Hugo to pop up again, no doubt to encourage viewers to check out the movie.

The jokes are just as disposable as the songs, but the special has a certain nostalgic value for me. However, of the six familiar players here, Kirk has the least to do, mostly just doing aimless goofy things, including eating a sandwich (!)

ADDENDA: A poster on CHFB asserted that the reason Kirk has little to do is that he was spaced out on drugs at the time, which habit played a big role in his declining career.

Another odd twist is that Kirk came out as gay in the nineties. Vincent Price never did, though his daughter asserted long after his death that the famed horror-star was bisexual. With those two things in mind, it puts a new spin on the line Price gives to Lembeck when talking about Kirk: "I must have that boy--!"

Posted by Gene Phillips at 1:20 PM
Email ThisBlogThis!Share to TwitterShare to FacebookShare to Pinterest
Labels: the marvelous