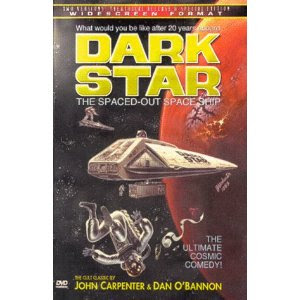 "Going to the movies, and making movies when I was young, was a way of making sense of the world I was living in."-- John Carpenter, director of DARK STAR

"Teach it-- phenomenology."-- the dead-yet-alive Commander Powell's advice on how to stop a bomb from worrying about exploding and to make it learn to love solipsism

Given the quote on phenomenology, I could hardly choose any other film for my first review here. The phenomenality of DARK STAR is uncomplicated: though some SF geeks would probably protest any equivalence between the wonders of science fiction and those of magical fantasy, the two categories have the same value in a narratological sense.

In contrast to most comedies, most ironies are about characters who possess little efficacy at the story's beginning and end up with even less of it by story's end. Certainly this describes the four astronauts of the scout ship Dark Star, as well as their dead commander, preserved in cryonic stasis but still capable of giving advice from the grave like one of Odysseus's shades of Hades. The ship's crew suffers assorted humiliating mishaps but their final doom is sealed by one of the bombs they use to blow up unstable planets. The Bomb (capitalized because it's an intelligent computer-bomb that functions as a character) jams in the bombay door and threatens to destroy the Dark Star. In the end (and no one reading this blog should ever expect spoiler warnings frome me), crewmen Boiler and Pinback are dead, the Commander's frozen body careens off into space, crewman Talby attains dubious immortality by merging with an alien intelligence and crewman Doolittle surfs his way down into a planetary atmosphere, where he flares up like a Viking warrior being burned with his ship.

Thus the primary subject of this ironic meditation on the tedium of space-voyages is ultimately death. And should one choose to label that symbolic discourse/mythicity in terms of Joseph Campbell's "four functions," then the dominant orientation of the discourse is toward the "Metaphysical." In science fiction, of course, the Metaphysical can only be symbolically real, not literally real within the discourse as in (say) C.S. Lewis' NARNIA books. But creators Carpenter and O'Bannon throw in a further irony to their metaphysical outlook. Whereas the ship's crew are inevitably doomed and only win some degree of the audience's respect through the nature of their deaths, the object that causes most of their deaths-- the computerized Bomb that ends up destroying the scout ship-- becomes as metaphysically aware as Hal-9000 of 2001: A SPACE ODYSSEY, a probable model for DARK STAR. Yet here too Carpenter and O'Bannon play ironically with the earlier concept. Acting on the Commander's advice, Doolittle (ironic name-choice there) tries to talk the "smart Bomb" into questioning his reason for existence (to blow things up) so that it will refrain from exploding. It works only briefly, though, for the artificial intelligence's ultimate response to a solipsistic reading of phenomenology is to deem itself God-- at which point "Bomb-God," apparently doing a little quick Bible-research, quotes Genesis 1:3-- "Let there be light!"-- and goes off anyway.
Posted by Gene Phillips at 11:01 AM
Email ThisBlogThis!Share to TwitterShare to FacebookShare to Pinterest
Labels: the marvelous