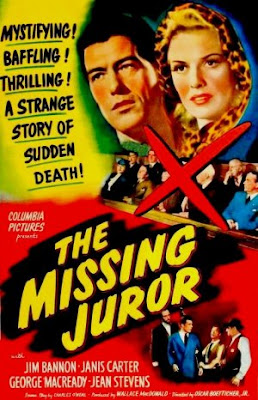 This minor B-picture, an early work by later cult-fave director Budd Boetticher, is elected to be my first example of the biphenomenal nature of the archetypal trope I label "perilous psychos." JUROR is also one of the many minor mystery-flicks incorrectly (by my lights) listed in R.G. Young's mammoth ENCYCLOPEDIA OF FANTASTIC FILM. I don't intend to dispute every film he included, but JUROR has two illustrative advantages. One advantage to me is that I just watched it this morning, having recorded it from the TCM channel some time back. The other advantage is that it contains several elements that could have propelled the narrative into the category of "the uncanny."

JUROR is what critics of the period called a "murder-a-reel" picture, in that a killer's repeated killings provide the story's motive force. After an innocent man dies (or is believed to have died) as the result of a jury's bad decision, an unknown murderer starts knocking off the jurors. The police think it's some crazy who has identified with the injustice done to the condemned man, but big surprise: the condemned man faked his death using someone else's body. (I can just hear the voice of Don Adams: "Ah yes, the old body-burned-beyond-recognition trick!")

Said murderer (nicely played by George MacReady) certainly qualifies as a psycho killer, which is an element that often appears in films of the uncanny. But MISSING JUROR doesn't enter that realm I call the "affective metaphenomenal." MacReady's psycho is dangerous, but he suggests no terror greater than himself, as I would argue is the case with the psychos of full-blown horror films.

The mythos of JUROR is "drama," or more precisely "melodrama;" both of which place more emphasis on the activities of antagonistic forces than on those of the protagonist. The hero here is your basic hardboiled newspaper reporter who knows crime better than the cops, and neither he nor the other characters ever take on the symbolic dimensions of the better B-mysteries of the time. Some of these do venture into interesting variations in the realm of psychological symbolism (Campbellian function: "Psychological"), and that's the general thrust of JUROR's hackneyed script. But aside from MacReady's performance the only interesting facet of JUROR are some of Boetticher's set-ups. One close-up scene appears to open with a man being strangled, only to pull back and reveal that the man's neck is being massaged by a masseuse played by hardworking character actor Mike Mazurki.
Posted by Gene Phillips at 12:04 PM
Email ThisBlogThis!Share to TwitterShare to FacebookShare to Pinterest
Labels: perilous psychos (n), the naturalistic