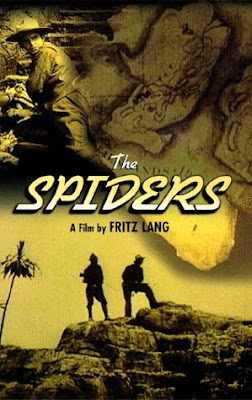 In my review of the 1929 TARZAN THE TIGER, I categorized it as having uncanny content in terms of two motifs: "outre outfits, skills and weapons" (for Tarzan) and "exotic lands and customs" (for the setting, which included the lost civilization of Opar).

In contrast to the TIGER, director Fritz Lang's earliest extant work shows how one can use the same motif and divest it of any fantastic expressivity.

THE SPIDERS that we have now is a compilation of two interrelated films that were originally released separately in Germany, entitled THE GOLDEN SEA and THE DIAMOND SHIP. Four parts were originally projected to be filmed but though only these two were made they succeed well enough in terms of coming to a reasonably satisfying conclusion. SPIDERS isn't terribly satisfying in most other respects, though.

Many reviews note similarities to Indiana Jones, in that the stories concerns amateur adventure-hero Kay Hoog traipsing around different exotic lands as he tries to foil the evil plans of a multinational criminal organization, "the Spiders." But in terms of phenomenality, there's little here to suggest the metaphenomemal dimensions of the RAIDERS series, the TARZAN stories, or even the progenitor of all "lost-civilization" stories, Rider Haggard's KING SOLOMON'S MINES.

Indeed, in the first part of SPIDERS, the hero and his adversaries do stumble across a lost Incan civilization full of treasure. But Lang's script plays the lost Incans down so much that they might as well have been any contemporary South American tribe. Lang's orientation here would have less in common with Indiana Jones than with more mundane globe-trotting types like Clive Cussler's Dirk Pitt.

And the organization of "the Spiders" is no SPECTRE, for that matter. The only villain who makes any impression is the group's leader, whose name, Lio Sha, is implicilty Asian (or faux-Asian). Lio Sha is played with commendable energy by one Ressel Orla, and is far more worth remembering than the rather stuffy hero.

The only mythic symbolism evident here falls into the psychological pattern, in that, just as in TARZAN THE TIGER, the doughty hero is torn between a "good girl" and a "bad girl;" somewhat remarkably, both of them are dead by the end of the story. But Lang's screenplay and scenarios here are too picayune to inspire much excitement in any department. At best THE SPIDERS may be seen as training-ground for future, better endeavors.
Posted by Gene Phillips at 1:28 PM
Email ThisBlogThis!Share to TwitterShare to FacebookShare to Pinterest
Labels: combative adventures, exotic lands and customs (n), the uncanny