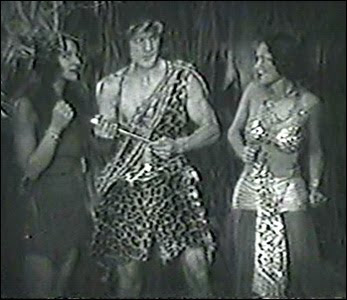 For my first entry into my phenomenon-category "uncanny" I felt obliged to pick a Tarzan film.

One reason is that Tarzan gives me a chance to introduce two uncanny-tropes at once. "Exotic lands and customs" applies to the fantasized jungle-setting in which the Tarzan films take place, and this trope alone would be enough to label certain jungle-films as metaphenomenal, even if they lacked the presence of a mostly-naked hero raised by apes.

"Outre outfits, skills and weapons" is a portmanteau category for all those qualities ascribed to the heroes and/or villains of certain stories that can shuttle between the atypical and the uncanny. It should be obvious that though Tarzan doesn't have unusual weapons, both his appearance and his ability to talk to animals place him in this category.

Many fantasy-film references are divided as to whether or not Tarzan films belong under their rubric. I believe R.G. Young includes them all, but John Stanley's CREATURE FEATURES guide only mentions those that have some strong fantasy-content. But in my view Tarzan by himself is a metaphenomenal figure, even putting aside the facts that the "great apes" that raise him in Burroughs don't exist in the real world and that Burroughs' common language for all his creatures does not exist either. Tarzan is a fantasy-figure who may appear at times to conform to the demands of real-world causality, particularly in the more "realistic" films like TARZAN'S GREATEST ADVENTURE (1959). But affectively he is a fantasy no matter how cognitively realistic he may appear to be, though 1984's GREYSTOKE comes pretty close to banishing most of the fantastic affects of the original concept.

TARZAN THE TIGER is both the last silent Tarzan serial and the first sound Tarzan serial. It was shot as a silent but as sound films became the new thing the producers added music and limited sound effects. With the exception of Elmo Lincoln's TARZAN OF THE APES (1919), TIGER comes the closest of any Tarzan film to being a direct adaptation of a Burroughs text, TARZAN AND THE JEWELS OF OPAR (1916). TIGER being a multi-part serial the plot naturally wanders quite a bit, but so does the original book. The gist of the plot is that while attempting to gather jewels from the lost city of Opar, ruled by lascivious queen La, Tarzan sustains a hit to the head that makes him lose his memory and forget his wife Jane-- which is great news for La, who's warm for the ape-man's form. There's an amusing scene where the confused Tarzan is seated between Jane and La, trying to make up his mind somewhat after the fashion of Hercules caught between Virtue and Vice.

Diamond hunter Albert Werper and slave-trader Achmet Zek, both villains from the Burroughs book, provide occasion for lots of decent if not exceptional fight-scenes with the hero.

Tarzan books often rate high in terms of mythic symbolism, but the films often don't fare so well. TIGER is noteworthy for being the second film to adapt the books' recurring character of Queen La. She was the most durable of Burroughs' many "evil queens," whom a Freudian would probably deem "phallic" because she kept trying to stab Tarzan for refusing her. The "Virtue-Vice" theme of the serial is largely in keeping with Burroughs' Victorian ethos and is the main source of the serial's mythic symbolism. Additional note: La is played by a actress, Mademoiselle Mithnou, of partial East Indian descent. I don't know if there are earlier East Indians who acted in Hollywood cinema but surely Mithnou is one of the first.

Excised from this adaptation is any reference to the fascinating mythologem (Sociological function in the Campbellian schema) of the La stories, in which Opar's populace is made up of extremely beautiful women and extremely bestial men, as a result of their own primitive eugenics program.
Posted by Gene Phillips at 11:21 AM
Email ThisBlogThis!Share to TwitterShare to FacebookShare to Pinterest
Labels: combative adventures, exotic lands and customs (u), outre outfits (u), superlative skills (u), the uncanny