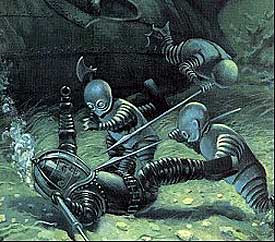 Like TARZAN THE TIGER, reviewed here, 1929's adaptation of the Jules verne novel MYSTERIOUS ISLAND appeared on the cusp between silent and sound films, and like TIGER, ISLAND met the challenge by mixing in scenes of spoken dialogue along with scenes with silent actors and title cards.

Unlike TIGER, MYSTERIOUS ISLAND has almost no resemblance to its source material.
In Verne, the island of the title is simply an ordinary island where the protagonists become shipwrecked, and where they encounter Captain Nemo and his submarine the Nautilus, holed up on the isle long after the events of 20,000 LEAGUES UNDER THE SEA.

In this film, the "island" of the title is a volcanic isle where the main character builds not one but two submersible crafts in an unspecified time before submarines as such have been invented. Said main character, essayed by Lionel Barrymore, is not Captain Nemo, but borrows his name from the "secret identity" of Nemo as related in the Verne book, which was "Dakkar." However, Verne's Nemo in that book was East Indian (though the Nemo of the first book was given a nonspecific European heritage), and this "Dakkar" goes back to being European. His island laboratory is just off the case of a fictional, Slavic-looking country called "Hetvia," from which comes the villain, Baron Falon. Where Dakkar is a high-minded scientist out to use his submarines to improve human life, Falon invades the laboratory with the intention of taking the vehicles and using them for world conquest.

The only other two characters of importance are Dakkar's sister Sonia and her lower-class boyfriend Nikolai. Early in the story Dakkar, while feigning friendship with Dakkar, protests an alliance between highborn Sonia and lowborn Nikolai, but Dakkar demonstrates that despite being a European he's got an American sense of egalitarianism and treats Nikolai as a worthy suitor. That's about all one can say about Sonia and Nikolai, who are otherwise just the conventional operetta-style romantic couple.

The sociological myth here, then, is embodied by Dakkar and Falon: between progressive, democratic science-as-inquiry and retrograde, aristocratic science-for-conquest. ISLAND evokes these elements reasonably well, though nothing in Lucien Hubbard's script begs one to sit up and take notice.

The strongest scenes are those depicting the two submarines-- each crewed by one of the opposing forces-- struggling for existence on the ocean floor. They stumble across an undersea civilization of duck-faced humanoids who have never been off the ocean floor; whether they're meant to be evolutionary branch-offs or just freaks of nature is left to one's imagination. A particularly strong scene has the duck-men go mad when exposed to blood in the water from a wounded surfaceman.

Many "adventurous" things happen here but the Fryean mode is that of drama, stressing heroism less than tragedy. After Falon's defeat Dakkar, already wounded unto death, nobly orders his research destroyed before he too perishes, implicitly leaving the proper exploration of science up to future generations.

On a side-note the film was a commerical and critical disaster. Some experts have speculated that its failure might have stalled the appearance of science fiction as a pure genre in the cinema for many years thereafter.
Posted by Gene Phillips at 2:56 PM
Email ThisBlogThis!Share to TwitterShare to FacebookShare to Pinterest
Labels: the marvelous