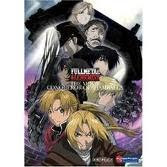 Though I'm a fan of the FULLMETAL ALCHEMIST anime-teleseries, I hadn't watched the later episodes in a while. I'd forgotten that the movie's narrative picks up about two years after the conclusion of the series, and focuses on one of the problems the series left up in the air: that Edward Elric, one of two brothers who practice real alchemy in an alternate world, becomes stranded in "our world," specifically in 1923 Germany, just as Nazism is on the rise.

FULLMETAL ALCHEMIST as a series has strong cosmological mythicity, given that its recurring theme focuses on the ability of the two alchemists Edward and Alphonse to literally transform objects into other objects. This seeming "magic," however, is always governed by a law resembling the laws of physics, which is the element that places the series-concept in Campbell's cosmological bailiwick.

To be sure, the movie is a little less mythic, largely because it's not able to deal as fully with the Faustian themes so often raised in the series. But the film does find a substitute for this theme with a Nazi science-experiment that attempts to open a gate into Elric's world in order to tap into the fabulous powers there.

As a sidenote, while Elric is trying to prevent the Nazi conspiracy, he gets assistance from none other than German-Jewish filmmaker Fritz Lang. The screenplay throws in some witty references to Lang's history with early science fiction films, as well as showing the mechanical dragon from SIEGFRIED and having Lang go by the fake name of "Mabuse." There's also a real dragon who is actually one of the denizens of Edward's world, who at one point is defeated by several spears that supposedly came from "the spear of Longinus." But this bit of quasi-Christian mythology is not enlarged upon.
Posted by Gene Phillips at 2:46 PM
Email ThisBlogThis!Share to TwitterShare to FacebookShare to Pinterest
Labels: combative adventures, the marvelous