CREATURE FROM THE BLACK LAGOON (1954) 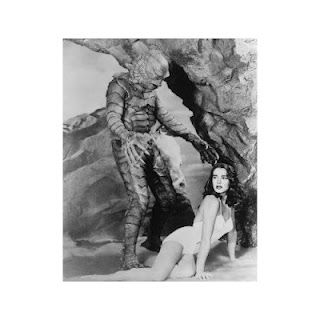 CREATURE begins by quoting the origin of the universe a la Genesis, yet afterward immediately shifts into a straight scientific account of life being born from the oceans rather than from the Garden of Eden.  Did the producers have the Biblical reference thrown in to placate audiences who might’ve taken a dim view of a purely materialistic account of the evolution of life?  It’s possible, but in any case the injection of the numinous supports the script’s assertion that before man arose, there might have been many other “experiments” that God and/or Nature perpetrated.  The opening sequence ends with the sight of the petrified hand of some dead humanoid—a hand like that of a human, except that this dessicated relic sports claws.  When a living exemplar of this almost-vanished species makes his first appearance on camera, he too does so by putting forth a clawed hand—to the accompaniment of a loud “dah dah DAH” musical sting—suggesting that in this world, the essence of the alien is symbolized by the interface of the human hand— the tool with which man builds things—with the destructive claw of the beast.


The claw beckons the audience to follow the adventures of the scientists who find it buried in rock in some Latin American country.  One of those scientists, Doctor Maia, invites a team of scientists from the U.S. to mount an expedition in the same territory, a territory enclosing the ominous-sounding “Black Lagoon.”  Three Americans—Doctor David Reed, his fiancés Kay, and Doctor Williams, who arranges the expedition’s financial affairs—elect to hire a boat and accompany Maia down the Amazon River to find more fossils.  But even before the expedition proper begins, it’s clear that Reed and Williams represent opposed aspects of man’s quest for science.  Reed speaks altruistically about wanting to learn more about the origins of life in order to gather knowledge that will help mankind explore outer space.  Williams merely wants to garner financial rewards in the here and now.


Before the boat-trip even begins, the film shows an Amazonian native attacked by a modern-day descendant of the claw’s owner, though the film naturally does not disclose the creature’s full appearance so early.  Some time later the expedition arrives on the scene to find the body.  Some time later the heroes will learn about local legends of a “Gill Man” who can breathe underwater, but though they don’t yet suspect his existence, the creature begins to follow these new intruders into his domain.


When the boat enters the Black Lagoon, prior to any sightings of the Gill Man, Kay displays her fascination with raw nature by speaking of “the beautiful lagoon.”  It’s not clear as to how long the Gill Man’s been around, but since he doesn’t seem to have any Gill Women around, one has to assume that he must have been spawned long, long ago.  But one look at Kay and the Gill Man apparently remembers the joys of spawning.  Following the famous “water ballet” scene in which Kay goes swimming and the Gill Man swims beneath her, mimicking her movements in a quasi-erotic manner, the monster decides to attack the boat, shredding one of its nets.  When the scientists are finally convinced of this anomaly’s existence, Reed wants to capture it for scientific study, while Williams seems more interested in killing it with his handy spear-gun.   “Dead or alive,” Williams asks Reed, “what’s the difference?” In a sense Williams speaks for that part of science that cares only about dissecting living things for the sake of sterile curiosity, while Reed implicitly respects the ecology of living things, though in 1954 the modern philosophy of ecological science had yet to get off the ground.


The Gill Man kills another crewmen and maims another man in the party.  With the help of the boat’s Latino captain (who has a nice moment when he shows Williams that the doctor’s money doesn’t put him in charge), the scientists manage to drug the Gill Man.  However, their success is short-lived.  The creature escapes and blocks the ship’s exit from the lagoon, forcing Williams and Reed to contend with it.  Callous Williams meets his maker at the clawed hands of his distant ancestor, and Kay is abducted into the creature’s subterranean boudoir.  Reed and his fellow adventurers arrive in time to keep Kay from becoming the mother of a new race of fish-people.  The Gill Man appears to perish, but as most fantasy-film fans know well, he returns in two more films.  Both of these will be covered separately, but arguably the “Black Lagoon” films present the decade’s most empathetic treatment of a science-fictional creature, and make him the fit heir to the Universal tradition of great monsters.

Posted by Gene Phillips at 1:37 PM
Email ThisBlogThis!Share to TwitterShare to FacebookShare to Pinterest
Labels: the marvelous