In many of my reviews I’ve sought to look past cheapjack sets and hackneyed plots to see whether or not the films I review contain any elements—however badly expressed—that speak to the way the human mind organizes its narratives according to the organizational categories supplied by Joseph Campbell—the cosmological (dealing with the physical world), the metaphysical (the world of spirituality and abstract concepts), the psychological (dealing with individual responses), and the sociological (dealing with social constructions).

But sometimes no matter how you polish a stone, it won’t become a diamond.

In my review of TWELVE TO THE MOON, I found it confused and full of narrative glitches, but there was the ghost of a real story there, and once or twice TWELVE came close to catching a glint of the SF-genre’s fabled “sense of wonder.”

Next to SPACE PROBE TAURUS, TWELVE TO THE MOON is another DAY THE EARTH STOOD STILL.

I suppose that in essence if not execution, TAURUS falls into the cosmological category.  The film concerns the titular ship’s exploration of two alien environments—an alien spaceship and another planet. Yet the film’s script shows no interest in exploring the nature of either one after the fashion of prose SF, but simply uses new environments to introduce new monsters.

A crew of four astronauts, seeking a planet for Earth to colonize, fights its way through meteor showers and comes across a mysterious alien ship, their first encounter with alien life.  They get on board and the sole alien occupant—your usual man-in-a-monster-suit—attacks them.  The astronauts kill the alien, and though one of them sheds a pretend tear that they couldn’t have learned more from this first contact, the narrative’s off and running, eager to find another monster.  On the aforementioned planet, the ship lands and encounters two aquatic menaces: a knockoff “Gill Man” who fights one astronaut under water and a giant crab.  The astronauts repel the monsters and go home; the end.

The movie was produced, directed, and written by Leonard Katzman, who would go on to produce well-known television shows like DALLAS and THE WILD WILD WEST.  An online comment by Francine York, the actress who played the ship's only female astronaut, alleged that Katzman proved incompetent to execute the picture and that the film was finished by longtime genre-director Burt Topper.

The only interest this dull specimen affords is that York's character provides a very minor sociological component. Whereas a fair number of 1950s SF-films gave female characters some status and agency, TAURUS-- which looks like it was made in the '50's but appeared in theaters in 1965-- gives the York character nothing to do.  It's plain that the script includes her so that she can do the courting-dance with the surly captain, who doesn’t like women on his ship but eventually falls for the hot lady scientist.  As if to agree with the captain’s opinions on women’s uselessness, another character notes that she’s on the ship not because she was the best qualified scientist, but because she weighed less than any male, allowing the astronauts to take along more equipment. That’s actually an appropriate rationalizaion, since aside from providing a little romance the female astronaut serves as nothing but dead weight.

In my review of FROGS I complained that its script didn’t do much with the potential rich-vs.-poor theme, and that the doomed victims were flat stereotypes.  But at least they were attractive stereotypes.  Like FROGS, CURSE concerns a straight-arrow viewpoint character (John Agar) who gets roped into visiting an out-of-the-way house in the boondocks of a natural setting (a cursed swamp this time).  But neither Agar, the mad scientist who owns the house, or his sexy neglected wife (Francine York again) proves the least bit interesting.  Then the audience must suffer through many many time-filling buildup scenes involving a male-and-female pair of thieves looking to rob the scientist and the sexy wife, who seems to think Agar can cure her loneliness.  Finally the scientist finally changes the female thief into a big ugly monster.  The monster goes on a rampage, killing the scientist and herself, and Agar’s left with the wife.  I have to admit, though, that CURSE outdoes SPACE PROBE TAURUS in badness in that at least I could enjoy hating TAURUS's reactionary politics.  Here, there's nothing even worth hating. 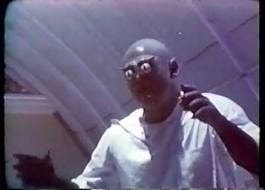