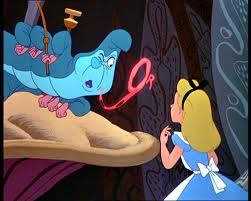 
In my review of DREAMCHILD, I noted that I judged the original Lewis Carroll “Alice” books to fit the Fryean category of “the irony,” in that they depict a world whose inhabitants, despite being vivid and colorful, are also cruel and indifferent, viewing all that makes “sense” to human beings as “nonsense.”  In addition, the original books fit my trope “delirious dreams and fallacious figments,” in that the entire action takes place in a dream of viewpoint character Alice.

I also remarked that DREAMCHILD, though not technically an adaptation, used Carroll’s stories as the basis of a narrative set in another mythos, that of a drama concerning the historical Alice’s relationship to the historical Carroll.  The two films I’ll examine here are both direct if very loose adaptations of Carroll’s nonsense universe, but they too diverge from the mythos of the irony, centering upon the mythoi of the “comedy” and the “adventure” respectively.

I’m far from the first reviewer to express disappointment in Walt Disney’s 1951 ALICE IN WONDERLAND.  Its closest resemblance to the Carroll books is that like them it’s a work of the “uncanny” phenomenality, in that the phantasms of Wonderland exist only in Alice’s dream.  But where Carroll delves into a child’s dreams in order to blur the boundaries between sense and nonsense, the Disney script emphasizes a moralistic tone.  Disney’s Alice doesn’t like the hard work of learning her lessons, so she daydreams about a world governed by nonsense rules.  She gets her idle wish, learning a new lesson: that a world without sense is one in which you can literally lose your head.

Whereas many Disney feature films use slapstick to enhance the narrative and thematic aspects of the stories, ALICE’s antics here have the feel of Disney’s cartoon shorts, in which the main character(s) stumble from one silly pratfall to another until the psuedo-narrative reaches its peak and the curtain comes down.  As in most adaptations, Alice chases the White Rabbit down a tunnel, falls into a room, and experiences an assortment of size-changing dilemmas trying to follow her tantalizing target.  In contrast to many adaptations, when she finally enters Wonderland proper, she encounters the “caucus-race,” one of Carroll’s trenchant satires on the “nonsense” regarded as “sense” in the human world.  But satire is absolutely of no interest in the Disney version, and the caucus-race is reduced to a slapstick farce, one that’s not even particularly funny.

Similarly, Tweedledee and Tweedledum, Alice’s next nonsense-encounter, constantly bumble about in slapstick fashion, as if the scripters were afraid that any sequence without slapstick might start to drag.  The twins recite the story of “the Walrus and the Carpenter.”  Not only do the silly comic elements detract from the story’s cynical outcome, the script can’t resist injecting a know-it-all “mother oyster” who warns her simple-minded offspring against the blandishments of strangers.

The best sequence, regarded on the strictly comic terms of the Disneyverse, is the Mad Tea Party.  Oddly, though guileless Alice tends to take most of the strange things she sees at face value, she shies away from the Mad Hatter’s unbirthday-party when the Cheshire Cat tells her that everyone there is mad.  But she goes, of course, and the film does manage to put across some of the lunacy of the original novel, thanks to skilled voice-work by Ed Wynn and Jerry Colonna.  However, when Alice becomes lost in a Wonderland forest, her weeping draws matching tears from the nearby creatures, demonstrating that we’re nowhere near the callous Carroll cosmos. Ultimately Alice ends up at the court of the Red Queen, where she’s subjected to the nonsense-justice of Wonderland—“sentence first, evidence afterward”—but manages to wake up to the reassuring familiarity of the real world, a soporific moral conclusion with which Carroll would have had no patience.

Oddly, a feature on the anniversary DVD mentions that Walt Disney and his team did consider adapting one of the most subversive segments of Carroll’s books: the one concerning the Duchess, whose advice to mothers with infants is to “beat him when he sneezes.”  The DVD shows some Tenniel-like advance drawings that capture much of the grotesquerie that the finished film leaves out, so it’s probably best Walt Disney decided not to attempt this sequence.

Tim Burton’s take on Carroll—which I’ll call WONDERLAND for short-- dispenses with the notion that Wonderland is a dreamscape.  The film, released by contemporary Disney but with none of the old Disney "brand" about it, begins with Alice as a young lady whose mother attempts to make her marry a rich but repulsive suitor.  In her heart Alice knows that she shouldn’t have to bow to the conventions of the real world, because as a child she visited the unconventional cosmos of Wonderland—though during her inevitable second visit, she learns that her child-self got the name wrong; that it’s actually called “Underland.”  Though Underland’s only intrusion into Alice’s real world is the White Rabbit, the script strongly implies that the other world maintains its own existence, for between Alice’s two visits the wacky inhabitants of Underland undergo a political victimization more in line with STAR WARS than with Carroll's satirircal japery.

Even though the script insists that the world’s proper name is not Wonderland, the CGI effects go all-out to emphasize the wondrous beauty of the terrain the teenaged Alice explores.  However, much as in STAR WARS and the NARNIA films, this Alice finds she’s been called to a new world not to simply wander about but to fulfill a heroic destiny.  The reluctant heroine not only learns that the quirky inhabitants of Underland are enslaved by the Red Queen (Helena Bonham Carter in CGI-altered form), but that a prophecy asserts that Alice will be their liberator. More specifically, Alice—a young woman who has no martial training whatever—is expected to slay the dragon-like Jabberwocky, as a prelude to destroying the Red Queen’s power.

Obviously this is about as far from satire as one can get, even further than Disney’s looney slapstick comedy.  Nevertheless, Burton’s WONDERLAND is enjoyable enough on its own terms, and even if the characters aren’t as dark as the Carroll originals, they are (in line with most of Burton’s other films) much quirkier than Disney’s flat comic types.  The CGI versions of Tweedledum and Tweedledee, though depicted as sympathetic figures, carry a creepy Charles Addams vibe, as does Johnny Depp’s Mad Hatter.

The Hatter, despite his madness, is something of a secondary heroic figure in WONDERLAND: like Obi-Wan in STAR WARS, he pushes Alice to be the hero that his world needs.  Alice finally girds her loins (so to speak) and has a vivid sword-battle with the Jabberwock, insuring the defeat of the Red Queen (who might be viewed here as symbolically identical with Alice’s tyrannical mother).  As a result of facing her destiny in Underland—which is to say, the “underworld” of her own psyche-- Alice returns to the real world, rejects its insistence of conformity, and successfully chooses her own path in proto-feminist fashion.

Though neither film has much in common with the themes of the Alice books, the Burton film does at least feel like the work of an artist providing his very different take on another artist’s themes.  Derivative though Burton’s film may be, it has a less cobbled-together feeling than the Disney adaptation, and for that reason is more aesthetically successful overall.

Posted by Gene Phillips at 1:50 PM
Email ThisBlogThis!Share to TwitterShare to FacebookShare to Pinterest
Labels: combative adventures, delirious dreams and fallacious figments (u), the marvelous, the uncanny