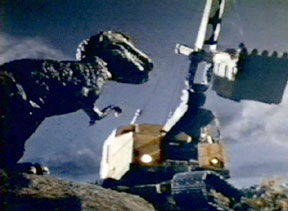 Here's a pair of prehistoric perils this time.

In previous viewings, I never liked Irwin Yeaworth's DINOSAURUS, the last of his collaborations with producer Jack H. Harris, following the enjoyable BLOB and the underrated 4D MAN.  But after a recent rescreening I found that though it was far from deep in terms of presenting its cosmological theme-- the fascination with prehistoric forms of life-- it had one virtue in that it was a very active film.  Even THE BLOB, despite its classic status as a concept, tends to "drag" somewhat.  But in DINOSAURUS, something's always happening.

By accident or design, Harris and Yeaworth managed to aim their three collaborations at each of three perceived filmgoer-markets.  THE BLOB, with its misunderstood teenagers, is aimed at the burgeoning teen audience of the period.  4D MAN, a more mature storyline, might not have appealed to any adults but those with a jones for SF, but the story still has an adult focus.  And DINOSAURUS spends most of its narrative time with Julio, the Caribbean island kid who gets to pal around with a dinosaur and a caveman for a little while-- surely the dream of dino-loving kids everywhere.

The adults in DINOSAURUS, mostly associated with a construction crew that accidentally unearths a brontosaurus and a tyrannosaurus, are perfuctory characters, treated with a child's idea of good and bad. This is particularly true of the cruel character of island manager Mike Hacker, who butts heads with the more charitable lead hero Bart Thompson.  A chance bolt of lightning revives the two dinos from their suspended animation and they begin roaming the island, causing trouble for the adults but fun for Julio, who gets to ride the bronto's back.  In addition, though it's not clear if lightning has anything to do with it, a caveman also awakes from suspended animation and eventually befriends Julio.

One likeable aspect of DINOSAURUS is that although Julio has fun with his new prehistoric friends-- particularly in a scene where he tries to teach the caveman to eat with utensils-- the film doesn't shy away from reminding one that real prehistoric life was nasty, brutish, and short.  This becomes readily clear late in the film, when the T-Rex finally stalks and destroys the bronto.  Hacker, the human equivalent of the voracious carnivore, has less success in his attempt to corral the caveman to use as a sideshow attraction (the usual KING KONG motif).  Eventually heroic Thompson manages to vanquish the T-Rex with the help of a steam shovel, making for a better than average climax.

The caveman, despite being played for a good deal of humor, emerges with a fair amount of pathos when he sacrifices his life for his modern-day friends.  DINOSAURUS even allows for a mild allusion to sex when the caveman gets ahold of lead female Betty.  It would be a dim kid indeed who didn't see what was on Caveguy's mind, though she manages to divert him nicely.

JUNGLE JIM IN THE FORBIDDEN LAND is in essence another "elephant's graveyard" tale of the sort that launched Tarzan into the sound era.  The villains, led by a nasty female mastermind named Denise (Jean Willes), hatch a plan to defy the governmental protection on elephants and to massacre many of the animals for their ivory.  For some overcomplicated reason
Denise and her buddies need the aid of a race of prehistoric giants-- two of which are in captivity-- who can lead them to the elephants.  Jungle Jim, on his way to the giants' land with an acerbic lady scientist in tow, naturally gets involved.

The "Jungle Jim" films never attempted to stress environmental concerns as much as the contemporaenous "Bomba" films, but FORBIDDEN does at least touch on such concerns.  In keeping with most jungle films, the evil rapacious whites are seen as the exceptions to the rule, as against the essentially benevolent (though in this film, often rather stupid) white ruling government.

The giants-- a big hairy male and a smaller hairy female-- don't really do very much in the story, although the male goes on a couple of rampages and has a brief bout with former Tarzan Weismuller.  The most enjoyable aspect of FORBIDDEN is the performance of Jean Willes as the venal Denise, who turns on the man who made her his ward (a patent father-substitute) and has him killed when he obstructs her plans.  She ends up being killed by the male giant, the sort of development that might contain a  Freudian theme or three.
Posted by Gene Phillips at 3:37 PM
Email ThisBlogThis!Share to TwitterShare to FacebookShare to Pinterest
Labels: combative adventures, combative dramas, the marvelous