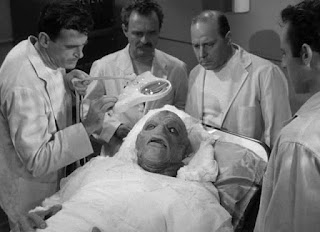 For fans of Universal Studios’ classic movie-monsters, the Creature of the Black Lagoon represents the last, albeit impressive, gasp of Universal’s old-school approach to the creation of formidable yet often sympathetic fiends.  Perhaps it’s appropriate, then, that the three films dealing with the “Gill Man” loosely recapitulate the cinematic development of the monster most closely associated with the studio: the Frankenstein Monster.

The only strong resemblance between the two Universal figures—one appearing near the beginning of the studio’s monster-making orientation, the other at its end—is that both characters are one-of-a-kind entities. Admittedly, it’s implied—though never established beyond all doubt—that other Gill Men once existed, while Frankenstein’s creation is pieced together from disparate bodies by a mad scientist.  But both concepts emphasize the pathos of the monster who has no ingroup, whose attempts to find liaisons in the human world must be doomed to a tragic outcome.

Because the characters are alike in a fundamental emotive sense, the Gill Man films progress roughly along the same lines as Universal’s Frankenstein.  The bulk of the narrative of the first CREATURE film—reviewed here—takes place in the Amazonian Black Lagoon, in a domain where modern humans are intruders.  The first two Frankenstein films, both directed by James Whale, take place in a Gothic never-never land that possesses only a rudimentary similarity to real-life Europe.  In CREATURE FROM THE BLACK LAGOON, human beings intrude on a world governed by an evolutionary life-process that dwarfs human conceptions, while in the Whale films, human culture is dwarfed by the presence of Almighty Death.

In contrast to its predecessor, REVENGE gets out of the Black Lagoon as quickly as possible.  A new expedition, headed by Dr. Ferguson (John Agar), journeys to the Amazonian home of the Gill Man, apparently believing that the rumors of the fish-man’s death have been exaggerated.  Ferguson even manages to charter the same boat from CREATURE, as well as its captain Lucas (Nestor Paiva).  Prior to the Gill Man’s capture, the scientists discuss the phenomenal good fortune that allowed the creature to survive for so long.  As if to mock the science-fiction underpinnings of the story, Lucas suggests that the Gill Man has actually survived so long because he is a demon incarnate.  No one else takes this seriously, and yet, a supernatural explanation might actually make more sense than a fish-man surviving on his own since prehistoric times.

Using the same drug-techniques seen in CREATURE, the expedition sedates the Gill Man and carts him to Florida, where he’s put on display in a Seaworld-like theme park.  CREATURE put forth a conflict between a Good Scientist who wanted only to learn the Gill Man’s mysteries for science, and a Bad Scientist who wanted to kill and dissect the humanoid if it meant gain.  No such dialectical conflict appears here. Doctor Ferguson is the main scientist in charge, and though his main motives are those of the furtherance of science, he has no ethical problem with chaining the Gill Man at the bottom of a tank and using him as a cash-cow to fund his studies.

Nor is there a dissenting voice in the film’s female lead.  In CREATURE Julie Adams’ Kay, despite being a loyal fiancés to the Good Scientist, seems fascinated by both the Lagoon and its creature—though not to the extent that she wants to be the mother to a bunch of Gill-babies.  Biology college-student Helen (Lori Nelson) gets the honor of participating in Ferguson’s investigations of the Gill Man, apparently on the basis of how well she fills out a swimsuit.  The Creature naturally fixates on Helen as a new potential baby-mama, but she never shows him more than token sympathy, and never opposes the creature’s incarceration in the name of science.  Compared to Kay, who’s treated as an equal by the males of the first film, Helen represents a repressive figure in gender-dynamics. Many 1950s films present women in authoritative or at least qualified positions, but Helen describes her interest in biology as something into which she simply drifted during college.  During a beachside idyll, Helen essentially agrees with Ferguson when he conveys the fifties-style chauvinism that women must choose between marriage and career, while men are free to do whatever they want.

Inevitably, and satisfyingly, the Gill Man breaks his chain and goes on a rampage, terrorizing the modern citizens who thought themselves safe from the demon Nature.  It’s at this point that the second Gill Man film resembles Universal’s first non-Whale film, SON OF FRANKENSTEIN.  In contrast to the Whale films, SON is less delirious, less purely Gothic. In addition, that film devotes much more narrative attention to the rational consternation of the local villagers at the experiments of the new Doctor Frankenstein, and puts less emphasis on the pathos of the Monster and more on his capacity for running amok and destroying everything in his path.

THE CREATURE WALKS AMONG US, the final Gill Man outing, takes much the same path as GHOST OF FRANKENSTEIN, the last of the “solo” Universal Frankensteins (i.e., films in which the Monster was the only fiend in residence).  True, SON suggests the possibility that the Monster may be modified via a brain-transplant, but only in GHOST does the monster-modification actually take place.  WALKS follows a similar premise in that a new scientific expedition, funded by arrogant Doctor Barton, seeks to force the Creature to become an air-breather, thus depriving him of his basic evolutionary identity.

The second sequel follows the model of the first film far more than did REVENGE.  Barton’s wife Marcia becomes the film’s initial viewpoint character, as she comes aboard her husband’s chartered ship and meets some of the scientists engaged to assist Barton, as well as Grant, a horny guide who seems to sense her alienation from her husband even before Barton makes the scene.  Barton soon lays out the expedition’s plan to seek out the creature—who evidently survived being shot down at the end of REVENGE, and took refuge in the Florida Everglades—and to alter the Gill Man into an air-breather.  It becomes clear that Barton is the reincarnation of the Bad Scientist, who cares only for personal gain and glory, while his subordinate Morgan is the Good Scientist, who respects the boundaries of nature and doesn’t want to change the creature. Nevertheless, Barton’s money wins the argument.

Grant covertly suggests to Marcia that Barton may have bought her with the same money.  It’s soon clear that all is not well between the head scientist and his wife.  This female lead is no shrinking violet, though; she shoots a rifle at some sharks to save a school of porpoises and joins the diving-expeditions as if she were as good as a man.

After a suspenseful game of cat-and-mouse—during which the scientists track their underwater prey with radar, as if he were a hostile missile—the Gill Man attacks the expedition.  By accident the Gill Man douses himself with gasoline, and in self-defense Morgan sets him afire.  The Gill Man is so badly burned that he can no longer breathe normally, which gives Barton the excuse he desires for his experiment.

Barton’s ship takes the comatose creature toward a scientific compound, but the Gill Man awakes first.  The creature happens across Grant getting grabby with Marcia and swats the would-be lothario, though in this story he has little or no interest in female humans.  Escaping to the sea, the monster finds out the hard way that he’s been converted into a “Lung Man,” and Morgan has to capture him and drag him back aboard ship.

At the compound, the confused Gill Man allows the scientists to put him in a pen.  Morgan and Barton re-enact the old argument between nature and nurture, with Barton claiming that the destruction of the creature’s gills has made him pacific, while Morgan argues that he’s become pacific because they’ve treated him kindly.

Marcia, continuing to grow away from her husband, identifies with the Gill Man’s need for freedom while warming somewhat to Morgan.  Meanwhile the Gill Man becomes hypersensitive to human violence.  When he sees Barton assault Grant out of jealousy, the Gill Man goes wild, killing Barton and returning to the sea, even though he can no longer live beneath the waves.  And though Morgan holds out the possibility that the creature’s gills might regenerate, the conclusion implies that this will be the fish-man’s final appearance—which, in the real world, it was.  It’s a far more poetic finish for the Gill Man than the gun-blasts he survives in the other two films, in that he’s at last reunited in death with the element that gave him life.

Posted by Gene Phillips at 3:37 PM
Email ThisBlogThis!Share to TwitterShare to FacebookShare to Pinterest
Labels: the marvelous