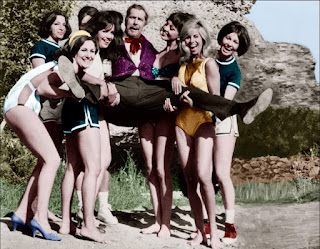 I imagine that the genesis of SERGEANT DEADHEAD was some AIP producer's hope that Frankie Avalon might prove viable as an "adult" lead actor in light comedy, perhaps after the example of Tony Curtis.  I assume that this and Avalon's same-year outing in DR. GOLDFOOT AND THE BIKINI MACHINE must have put paid to that expectation.

With the exception of one joke about a bunch of towel-clad WACs forced to salute a superior officer, DEADHEAD is dead in the water as far as jokes.  Louis Hayward, one of the credited writers on BIKINI, doles out the usual service comedy yucks with no finesse, and director Norman Taurog, whom I beat on earlier for BIKINI, puts the jokes across with stolid indifference to timing or excitement.  The plot concerns the klutzy Deadhead accidentally going up in a space capsule.  After his return he becomes a celebrity, and gets an ego so inflated that he becomes a problem for the military brass. They luck out and find an exact double to take Deadhead's place for public appearances, but Deadhead is also scheduled to be married.  Thus the final question becomes, will Deadhead be able to head off his double at the "pass" (so to speak)?  For some reason I liked Avalon's performance as the titular sergeant better than many of his other roles, but it certainly wasn't because of script or direction.  The main attraction is the apperance of several comedy veterans-- Gale Gordon, Fred Clark, and the inevitable-at-AIP Buster Keaton-- but none of them have much to do, though Eve Arden gets the best song out of an unmemorable lot.

DEADHEAD appears in some fantasy-film concordances simply because the title doofus ends up going into orbit in a space capsule.  I don't regard films about modern-day space-travel to be "science fiction," however.  The film does have include a chimp in the same capsule (who acquits himself better than Avalon's Deadhead), and Fred Clark has a slapstick bit where he gets electrically charged and lights Gale Gordon's cigar with his finger.  But none of these factors make DEADHEAD relevant to metaphenomenal cinema.

Once or twice, Mario Bava's DR. GOLDFOOT AND THE GIRL BOMBS has a nice Europop atmosphere that looks forward to the director's DIABOLIK in 1968.  Still, though GIRL BOMBS looks better-directed than Taurog's BIKINI MACHINE, the script's about the same.  I've seen only the Americanized version of Bava's film, which pits Goldfoot (Vincent Price) against another bumbling secret agent (Fabian) and an even more bumbling duo, sort of an Italian "Mutt-and-Jeff" pair who get drafted into the spy games.  Lovely Laura Antonelli goes along for the ride but doesn't get much to do, other than having a catfight with Goldfoot's female accomplice.  It's indicative of the level of the humor that the assistant is named "Hardjob"(after Harold Sakata's "Oddjob" from the GOLDFINGER film), while Goldfoot's other assistant is a male Asian (George Wang) with a fair resemblance to Sakata.

There is a little more energy in the film than in the previous entry: Price seems to have a little fun dispensing flowery talk ("poem of the Pacific!") and he suddenly seems to think he's Chinese, which gets a strange reaction from his two Asian colleagues.  The "girl bombs" have less to do in the story, but they seem a little sexier this time-- maybe thanks to the absence of Susan Hart.  But it's still a pretty minimal improvement.