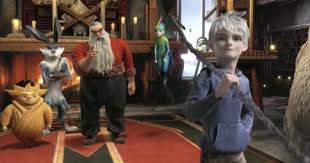 I'm a longtime lover of crossover-concepts, so I suppose 2012 must go down in my personal history as the first time not one but two animated crossover-films appeared in the same year: Dreamworks’ RISE OF THE GUARDIANS and Disney’s WRECK-IT RALPH.  Both are reasonably amusing entertainments, but only one of them realizes the full potential of a crossover: to juxtapose ideas that weren’t meant to go together but can successfully blend when the writer understands how to play the disparate elements off one another.


Given that Dreamworks did a nice job with crossing over fairy-tale figures in its original SHREK film (though not so much in the sequels), I might have expected that company to produce the better 2012 crossover-film.  Instead, the Dreamworks film never goes beyond its derivative nature, which might be capsulized as “MIRACLE ON 34TH STREET meets THE AVENGERS,” with lots of goofy jokes.


The viewpoint character of GUARDIANS is Jack Frost, a young winter-spirit able to conjure up ice and snow wherever he pleases.  Though he generally has no cares beyond having fun, he has two sources of disquiet:

First, he doesn’t know who he is or where he came from, except that the unapproachable, never-seen being called “the Man in the Moon” gave him his name.

Second, though he can interact with humans with his powers, they can’t perceive him, and only know his name as an outmoded expression.

In contrast, children the world over still believe in the mythic characters who comprise the Guardians—Santa Claus (given a delightful Slavic accent here), the Easter Bunny (rendered as an Aussie for some reason), the Tooth Fairy, and the Sandman.  In their capacity as Guardians, these folkloric characters not only pursue their assorted child-nurturing duties, they keep watch to make sure that children’s belief in them stays strong so that they can continue those duties.


Along comes a menace to that stability: an evildoer named Pitch Black, also called the Boogeyman, who flourishes on the emotion of fear.  The villain manages to take control of the benign dreams created by the Sandman and spawn hideous nightmares—or to be precise, night-mares, since Pitch’s creatures all take the form of black monster-horses.  With these minions Pitch begins undermining the ability of the world’s children to believe in their protectors.  The Sandman is (apparently) killed, the Tooth Fairy’s domain is ransacked, the Easter Bunny’s eggs are smashed.  Though Christmas is months away, even Santa is diminished by the growing plague of disbelief.


The Guardians attempt to enlist the flighty Jack Frost to their cause.  As if usually the case with rebel-heroes, initially Jack can only be drawn into the battle by appealing to his self-interest: his desire to know how he came to be what he is.  This becomes a running subplot, in which Jack learns that there’s a record of who he once was in the Tooth Fairy’s collection of harvested teeth (don’t ask).  However, in good time Jack gets religion and begins fighting Pitch for the sake of the kids, particularly one young boy who maintains his belief long after his kid-friends have lost their faith.  A climactic scene in which the kids use their belief to combat Pitch's terrors put me in mind of a similar "belief vs. unbelief" struggle in the 1982 animated cartoon THE FLIGHT OF DRAGONS.


The attention to Jack’s self-realization is a secondary matter: GUARDIANS, which has obviously patterned its concept on comic-book hero-teams like the Avengers and the Justice League, falls squarely within the mythos of adventure. Accordingly, Dreamworks doesn’t spare the CG-graphics in the area of wild battle-scenes.  At the same time, the film provides an acceptable amount of fun with such ideas as a sword-wielding Santa or a boomerang-tossing Easter Bunny.  However, though GUARDIANS is enjoyable formula, it’s never anything more than that.


There are hints of mythic resonance that could have gone beyond mere plot-utility.  Jack is revealed to have been a human before becoming a frost-spirit, and the Tooth Fairy tells him that all of the Guardians were humans raised to the status of protective spirits.  This follows a myth-pattern set by the heroes of ancient Greece, who were portrayed as mortals who once lived and later became gods.  The Man in the Moon, who remains an otiose deity-figure, is a folkloric stand-in for God on High.  The villain is a pretty simple Satanic type, seen to best effect when he plays “tempter” and nearly sways Jack Frost from his heroic course.  It’s interesting that the writer of the books on which the film is based named this boogieman “Pitch,” a name which appears in the 1960 Mexican film "Santa Claus" as a name for the Devil.  However, this devil's gimmick of unleashing nightmare-horses gets old very quickly; he might have seemed more like a master of nightmares had he been able to unleash a greater variety of horrors. 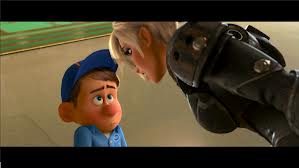 The script for WRECK-IT RALPH had apparently been kicking around since the pre-Internet days when arcade-games enjoyed the height of their popularity. Today, the references to arcades may evoke nostalgia more than anything, and the idea that the games’ characters are secretly alive is familiar ground after ROGER RABBIT and TOY STORY.  The script plays heavily to the nostalgia-factor with several cameos from such licensed characters from such games as STREET FIGHTER II, QBERT and SONIC THE HEDGEHOG.


But properly speaking, WRECK-IT RALPH is not a crossover of characters designed for separate franchises, but rather parodies of real game-characters, much as MONSTERS VS. ALIENS did with classic movie-monsters.  RALPH’s storyline principally concerns five main characters who hearken from three made-up arcade games, all of which sound like franchises that might have existed but did not.


From the game “Fix-It Felix” comes the titular character.  His discontent with his role of “villain” moves him to desert his game, where the star Felix and the game’s other denizens take him for granted.  Once he realizes that Ralph has vanished, Fix-It Felix is obliged to follow Ralph into other games in order to corral his resident villain, lest the game be shut down.

Ralph, obsessed with finding validation in the form of a “medal,” lucks out—so to speak—on his first try, when he invades a video-game roughly patterned on ALIENS.  There he meets the third major character, badass lady soldier Sergeant Calhoun, whose regular game-plotline involves leading other badass soldiers against swarms of ghastly “Cy-bugs.”  Ralph takes part in the game, and despite numerous comic blunders, he manages to acquire a medal for his efforts—though when he leaves that game, he accidentally takes a Cy-bug with him.  Calhoun subsequently meets Felix and they team up to track down Ralph and the Cy-bug.

Ralph crashes his way into the third game, the memorably-named “Sugar Rush,” a girly-girl scenario in which cute little girls race one another in super-go-carts.  Ralph loses his precious medal to a cute but very manipulative munchkin named Vanellope, and to get it back, he has to help her win a race.  The fifth and last central character, the evil King Candy, wants to stop Vanellope no matter what.

Like the aforementioned ROGER RABBIT and TOY STORY, RALPH is hectic in its heavy layering of subplots and sudden revelations, many of which are hurled at the audience before it has much chance to care about them.  Nevertheless, in terms of its four major heroes, RALPH does a fine job of playing the disparate characters off one another. There’s nothing new about the main character Learning His Lesson that a mere medal can’t take place of human connections.  But though many films have put across such moral lessons with heavy sentimentality, the film displays honest sentiment when Ralph is forced to crush Vanellope’s dreams (temporarily) in the belief that he’s saving her life by so doing.

In contrast to this displaced parent-child bonding, shrimpy Felix and warrior-babe Calhoun pursue a more romantic form of bonding.  The film plays this more for comedy—particularly in a scene where Calhoun can only save her life and the life of Felix by punching him in the face several times.  Nevertheless, RALPH’s script has fun playing off the disparity of pairing up a woman with the power to inflict massive damage with a male with the power to “fix” anything.

Both films have a strong admixture of elements from adventure, comedy, and drama-- though almost none from the irony.  Still, I label RISE as a "combative adventure" because the adventure-elements predominate.  WRECK-IT RALPH is not quite as clear.  But after some consideration I determined that for the most part the adventure and dramatic elements of RALPH serve to underscore a very comedic theme, that of bringing together oddly-matched characters to their mutual benefit, so I term this film a "combative comedy."
Posted by Gene Phillips at 4:19 PM
Email ThisBlogThis!Share to TwitterShare to FacebookShare to Pinterest
Labels: combative adventures, combative comedies, the marvelous