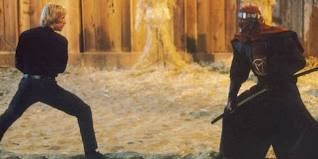 
As with the various DURANGO KID westerns I've reviewed, THE OCTAGON is a film whose metaphenomenality inheres entirely in its use of unusual costumes-- but for the film's villains, not for the hero.  Although Chuck Norris' hero "Scott James" has been trained in the arts of the ninja, his only concession to ninja tradition is that briefly he appears clad in black attire.  Only the bad-guy ninjas appear in full costumes.

There's not a lot to say about the slack plotline of OCTAGON, in which an isolated fortress of ninjas somehow manages to maintain itself in some American forest while periodically sending out its black-clad killers to perform assassinations.  Hero James, who received his training by virtue of being adopted by a ninja master, left the fold in part because of conflicts with his envious brother Seikura (Tadashi Yamashita).  James attempts to keep out of ninja business, but finds himself drawn back in, partly thanks to the contrivance of his mercenary pal McCarn (Lee Van Cleef), who is in the business of hunting terrorists.

I don't expect great acting out of this type of American chopsocky, but in the entire cast Van Cleef is the only actor to bring some elan to his tawdry role.  Norris, Yamashita, Kim Lankford, Karen Carlson-- all turn in dog-worthy performances.  Their clumsy thesping would be easier to overlook if director Eric Karson and his team could bring any energy to the proceedings. One review called OCTAGON "sluggish," which sums up the flick's failings adequately. I will note that this was Karson's first time directing an entire movie, and that he did improve somewhat with his next two martial-arts adventures, 1986's OPPOSING FORCE and 1988's BLACK EAGLE.

A side-note: in the same way that I stated that the heroic "Durango Kid" was an uncanny presence with his bandana-masked getup-- but that ordinary bandits wearing bandanas would not be-- not all ninjas convey an uncanny vibe.  I'm not likely to ever review the 1997  naturalistic modern-day karate-film KICKBOXING ACADEMY.  But this film's very minor use of "ninjas"-- who are just a coterie of modern-day thugs in ninja costumes-- does not convey any uncanny status upon its narrative.
Posted by Gene Phillips at 2:25 PM
Email ThisBlogThis!Share to TwitterShare to FacebookShare to Pinterest
Labels: combative adventures, outre outfits (u), the uncanny, weird families and societies (u)