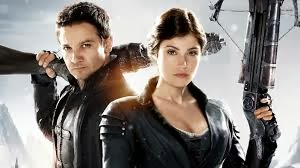 I decided to review the three "Hansel and Gretel" films that came out, but as two of the titles are overly cumbersome, I didn't feel like squeezing them into my header.

Last summer's HANSEL AND GRETEL: WITCH HUNTERS remains the best known of the three. It wasn't the first out of the gate, but I find it likely that the one that came out first was influenced by pre-production news of WITCH HUNTERS.

Unfortunately, HAGWH doesn't have much to offer beyond its basic "high concept:" that of showing the folkloric characters Hansel and Gretel grown up and kicking witch-ass.  The setting is vaguely Germanic, but all of the characters talk like modern-day Americans.  Early in the film I was particularly ticked off by one example of banal American-ese, when Gretel asserts that there is increased "witch activity" in the area. CSI: WITCH HUNTERS, anyone?  Even Terry Gilliam's 2005 misfire, THE BROTHERS GRIMM, seemed more in touch with the period.

There's a marginal mystery about the circumstances under which Hansel and Gretel were abandoned as children, after which they were waylaid by a cannibal hag with a candy house, their first "victim."  But the film doesn't exert itself to put any effort into the siblings' backstory: it's only there in order to provide the villain with a reason for going after Gretel, whom the witch wants to use as a sacrifice due to her lineage.

Even for a Big Dumb Action picture, Hansel and Gretel are woefully under-characterized; they're not even convicing bad-asses, though as Gretel Gemma Arterton throws some decent punches.  Particularly ludicrous given the loose period setting is that the two heroes have recourse to assorted rapid-fire weapons, such as a Gatling Gun.  Arterton and Jeremy Renner are competent but the witless script gives them nothing to work with.  Punch, hit, shoot; rinse and repeat.

The "H&G" film that did make it out first, appearing on SYFY in February 2012, was almost certainly anticipating the original release date of WITCH HUNTERS in March of that year.  Like many SYFY fantasies it's shot on a very restricted set-- a real forest, to be sure, but only within very limited parameters.

The most amusing thing about the film is the name.  Hansel, not Gretl, is the witchslayer of the story, and I can only assume that the producers didn't think "Witchslayer Hansel" was strong enough to let viewers twig that the flick was about "Hansel and Gretel."  As in the big studio production, Hansel and Gretel are as children accosted by a witch.  But the witches in this tale aren't interested in eating people, only in possessing them.  The witch Zora steals Gretl from Hansel's side, leaving little Hansel behind.  Since he thinks his sister dead, Hansel devotes his life to hunting witches.  During his campaign he picks up two "good witch" aides: mature beauty "Lara" and younger beauty "Ehren," who use their magic to battle Zora's coven.  Hansel later learns that his sister is alive, having been kept around into adulthood so that Zora could inhabit her body (played by the film's one big-name star, Shannen Doherty).

GRETL never looks like anything but another made-on-the-cheap knockoff.  Yet all the body-switching was at least a trifle more emotionally involving than the outrageous-but-derivative kinetics of WITCH HUNTERS.  It's a measured choice at best, but GRETL, despite the awkward title, comes off best of the three. 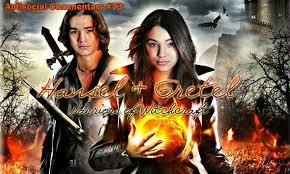 HANSEL AND GRETEL: WARRIORS OF WITCHCRAFT came a little closer to the actual release date of WITCH HUNTERS, showing up on DVD rental "shelves" in February 2013.  However, the heroic siblings are named "Jonah" and "Ella," and their only connection to the siblings of the folktale is that they are supposed to be modern-day descendants of Hansel and Gretel.  Jonah and Ella are expelled from a high school because Jonah gets in a lot of fights.  They're accepted into another academy in Salem, Massachusetts, whose headmaster is played by yet another "star-with-marginal-name-value," Eric Roberts.  Soon Ella learns that one of the local cliques is a witch coven, and it seduces Jonah to the dark side of the Force, or something. With the help of Principal Roberts Ella takes on the witch-cult with some of the most ennervating action-scenes ever.

The only plus here is that director David DeCouteau does allow for some hot women alongside his more trademark "hot guys."  But this movie is too cheap to even make "cheap thrills" a reality.  I only watched it in a mood of looking for new nominees for your basic "so bad it's good" parties.  WARRIORS is a masterpiece of tedium with no possible laughs, so it comes off as inferior even to this sort of junk.

Posted by Gene Phillips at 2:12 PM
Email ThisBlogThis!Share to TwitterShare to FacebookShare to Pinterest
Labels: combative adventures, the marvelous