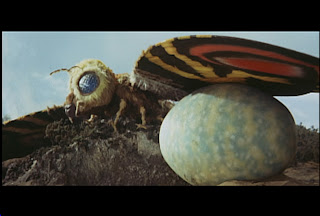 
The fourth Godzilla film is also the third to pit the big lizard against a second colossal creature. However, while Godzilla's previous foes Angilas and King Kong present the same danger to humankind that Godzilla does, Mothra-- making her second appearance following her 1961 debut--
has a different tonality.

Indeed, though the film was retitled GODZILLA VS. THE THING for the American market, the Japanese title shows the correct emphasis: this is structurally a Mothra film in which Godzilla is the giant moth's antagonist.

A typhoon, rather than atomic tampering this time, is responsible for causing the gigantic egg of the next Mothra to be carried from Infant Island to the shores of Japan.  Indeed, nuclear power is only occasionally addressed in this film, mostly by picking up on the plotline of 1961's MOTHRA, which argues that Infant Island has been reduced to a wasteland by atomic testing.  It's not abundantly clear as to how the islanders can live there at all, though it may be that their resident moth-god provides some help in that regard.  When the storm deposits the egg off Japan, greedy businessmen, much like those from the first Mothra film, lay claim to it and advertise it as a spectacular attraction for "Happy Enterprises."  Some noble reporters, primarily lead male Sakai and lead female Junko, question the businessmen's right to the great egg.  The "Mothra-fairies" appear first to the businessmen, attempting to regain the egg of their deity, but the corrupt corporate types merely try to capture the fairies for further exploitation.  The fairies then appeal to the reporters for help, but even the Fourth Estate can't do much to stir up opinion against Happy Enterprises.  It's rather surprising that the government doesn't intervene in the matter, since the fairies warn that the adult Mothra may attack to regain the egg, and the creature's last rampage would be an event the government wouldn't want to repeat.

Enter Godzilla, rising once again from a short-lived hibernation.  Sakai and Junko journey to Infant Island, hoping to persuade the islanders to summon Mothra to save Japan-- and the egg-- from Godzilla.  The islanders initially refuse, but Junko delivers an impassioned speech which sways them.  The giant moth, moved by the prayers of its people, attacks and almost defeats Godzilla, only to receive a death-wound from the Big G's fiery breath.  Godzilla rises to attack again but the Japanese military delays him again, notably with an electrical trap.

However, the egg has been kept safe long enough that it can now hatch, which it does in a bravura sequence, nurtured by the sacral song of the fairies and the islanders.  (There's even a suggestion that the islander-god may have some existence separate from Mothra herself, since one of the islanders' idols flashes with magical power.)  Two Mothra-larvae hatch from the egg and end up defeating Godzilla by ambushing him with gobs and gobs of enfolding silk.  The larvae and the fairies then return to Infant Island as the reporters bid them a cheery farewell.

In my review of MOTHRA I noted that because the giant moth was female, this signified "the hegemony of feminine nature." MOTHRA VS. GODZILLA underlines this hegemony even more than the first film.  If Godzilla and similar creatures represent the face of an unforgiving nature, striking back against the abuse of humanity, Mothra symbolizes the feminine virtue of motherly forgiveness.  It's surely not accidental that Junko, not the more forceful Sakai, is the one to speak most eloquently on the need for the islanders to forgive and forget.  Even the notion of the egg's spawn twin larvae-- mirroring the image of the twin fairies-- speaks to the feminine prodigality of the natural world, as against the destruction wrought by male-oriented technology and weaponry.
Posted by Gene Phillips at 3:43 PM
Email ThisBlogThis!Share to TwitterShare to FacebookShare to Pinterest
Labels: combative dramas, the marvelous