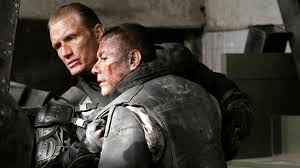 I haven't seen the three sequels that followed 1992's UNIVERSAL SOLDIER, but the fifth and sixth installments in the series don't reference any of the events in those films-- particularly since Wikipedia notes that the fourth in the series is now considered "out of continuity." In contrast to, say, the ALIENS series, it would be easy to see either REGENERATION or DAY OF RECKONING as direct sequels to the very first film.

This relative independence would seem to be the creative choice of John Hyams, who directed the 2009 film from a script by Victor Ostrovsky.  Following this, Hyams and two other writers supplied the screenplay for the 2012 SOLDIER.

While Hyams has yet to make a "big" film that has vaulted him to critical attention, I am impressed that he has developed some excellent mise-en-scene on a film-series whose original incarnation was, to be sure, popcorn entertainment at best.  In contrast to many "MTV generation" directors who rely on flashy visuals but show themselves to be incompetent in allowing the actors' talents to shine, Hyams manages to show both hero Van Damme and villain Lundgren to good effect as actors as well as martial masters of mayhem.  Yet at no time does REGENERATION fail to provide the kickass thrills that most fans of UNIVERSAL SOLDIER have come to expect.

The only downside of the lively script is that it begins with a setup that proves to be a mere excuse to set another batch of the undead, hyper-accelerated soldiers-- "Unisols" for short-- into action. A group of Russian terrorists takes control of the Chernobyl nuclear plant, threatening to set off a bomb, and thus a nuclear disaster, in order to have their fellows freed from prison.  When counter-terrorist forces-- including soldiers from the United States-- attack Chernobyl,  they learn that the terrorist leader has the new improved version of a Unisol working for him, revived by a rogue scientist.  After the ordinary soldiers are repelled, America sends four of its old-style Unisols as well, but the New-Coke Unisol slaughters them as well.

Naturally, the military next turns to its favorite resurrected grunt, Luc Devereaux (Van Damme).  Though Devereaux is still receiving psychiatric counseling for his anger issues, he's sent to the Ukraine to do his duty.  As it happens, rogue scientist Colin isn't entirely on board with the terrorists' aims: after they've gained their concessions, Colin reveals that he has a second Unisol working for him-- none other than the clone of Devereaux's old opponent Andrew Scott (Lundgren).  But Colin-- almost certainly named for Colin Clive, the first actor to play Doctor Frankenstein in a sound film-- learns the hard way that it's a perilous business messing around with things that should stay dead.


Suffice to say that though Devereaux does have some battles with terrorists when he makes the scene, the film's main concern is to depict yet another epic battle between the Good Soldier and the Bad Soldier.  Oddly, even though it's a much longer battle than the one Roland Emmerich directed in 1992, and even though Hyams is a better director than Emmerich, Hyams doesn't quite manage to one-up the original in this regard.  Nevertheless, it's a better than average grudge-brawl, with the usual expected winner.  The introduction of clone technology in this film goes on to have repercussions for the following installment in the series. 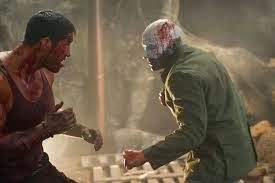 DAY OF RECKONING is a very different animal from REGENERATION, to the extent that I could almost label it by the Fryean term "irony."  When I've used this term for other film-reviews, as with last summer's LONE RANGER film, I mean it to describe those narratives where the protagonists, even if they seem to triumph, do so in a world bereft of positive meaning.  RECKONING doesn't quite descend to that level, but it comes close.

One thing that separates RECKONING from the other "Unisol" films I've seen is that the action-spectacles, while no less kickass, don't have the rather removed feel common to most adventure-films of this type.  Director Hyams orchestrates the bloody violence in such way that pain really looks like it hurts, rather than being some minor inconvenience that a properly stoic hero can throw off.

RECKONING also plunges into the deep end of the conceptual pool by debuting a new protagonist, never given any name but "John" (Scott Adkins).  The film opens with a horrific home-invasion scenario, wherein John's family is killed before his eyes by masked assassins, one of whom appears to be Luc Devereaux (again, Van Damme).  The audience does not initially see John, for Hyams shows him reacting to the violence as if his eyes were one with the lens of the camera.  Nine months later, John awakens from a coma in a hospital, and slowly regains use of his limbs and faculties.  He remains something of a blank slate during this time.  An official working for the government gives John some info about Devereaux's career-- and if it seems odd that an operative would divulge such info to a mere civilian, that's because it will be borne out that John isn't any more ordinary than Devereaux.

In short, this time the Unisols have revolted and escaped their handlers, starting their own church out in the boondocks and pledging to take over the country that exploited them.  The "Unisol Church of Eventualism" is headed by a reborn-again Andrew Scott (Lundgren again), a clone of the one defeated in REGENERATION.  For some reason Luc Devereaux-- or this version of him, since it may not be the original-- has made some common cause with his old enemy.

John tries to ferret the reasons for the murder of his wife and child, only to learn, in time, that he too is a Unisol, and worse, a clone of an original.  A previous clone of John was sent to extinguish Scott's organization, to get rid of the rebellious supermen "before they reproduce"-- though all the Unisols are men and none of them seem to be making plans to become baby daddies.  The previous clone failed, so the government decided to try a new wrinkle: a clone motivated not by a soldier's loyalty to country, but a father's loyalty to his family.

I don't believe I take much away from RECKONING by blowing this particular spoiler.  Hyams's script and direction constantly keeps the viewer on edge with grundgy visuals and inventive lighting-effects, so it should be clear from the get-go that John's initial situation isn't all that it appears to be.  In fact, though the operative later tells John that his family never existed, neither John nor the viewer truly knows whether or not this is true, or whether the current version of Devereaux had anything to do with any home invasion or not.

In due time, John the Second does obey the government's will, tracking down Scott and Devereaux to their lair.  Though martial-artist actor Adkins is not as well known an action-icon as Van Damme and Lundgren, Hyams' team goes the distance to make his fights with both figures compelling-- and, as I said before, very bloody and painful looking.  Perhaps adding insult to injury, Adkins also renders a better acting performance than either Van Damme or Lundgren, and not only in this particular film.
The one thing that keeps John's world from devolving into meaninglessness is that at the end he finds a unique way to one-up the manipulative agency.

Since RECKONING is an installment in an ongoing serial, I don't suppose it's likely to accrue respect for being so different in tone and content.  But it deserves to be seen less as a pure action-adventure or more as an "everything you know is wrong" thriller along the lines of John Schlesinger's MARATHON MAN.
Posted by Gene Phillips at 3:30 PM
Email ThisBlogThis!Share to TwitterShare to FacebookShare to Pinterest
Labels: combative adventures, the marvelous