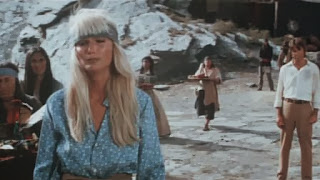 This U.S.-Spanish co-production, put together by roughly the same team that came out with 1983's HUNDRA-- also starring blonde Laurene Landon-- is pleasant enough escapist adventure.  Compared to many other ersatz "Indiana Jones" knock-offs, YELLOW HAIR is probably near the top of the pack, though it suffers from a wandering, "make it up as we go along" script.

Writer-director Matt Cimber throws in a little metatextual humor, mostly consisting of voiceovers that adjoin the viewer to watch for the next installment of Yellow Hair's supposedly serial adventures.  But happily there's not too much of this.  The titular "fortress of gold" is a hidden sanctuary of a lost tribe called the "Tulpan"-- implicitly pattened on the Aztecs-- who have survived into the late 1800s.  No one knows the location of the hidden warriors, though they emerge from time to time to taunt the Mexican military.  The one "marvelous" aspect of the Tulpan is what appears to be a magical pool with the Midas touch, for when they lower a victim into it, the pool takes on a mystic glow and turns the victim into a statue-- I presume a golden one, though the material doesn't look much like gold.  At no time is the magic pool given any explanation.

Yellow Hair (Landon) is a half-Comanche, half-white woman who has been raised with the tribe since childhood.  She regards her adoptive mother Grey Cloud as her true parent but otherwise knows nothing of her parentage. Grey Cloud also takes in a Caucasian orphan, who grows up along Yellow Hair as an adoptive sibling and takes the name of "the Pecos Kid."  Pecos leaves the tribe and apparently travels around acquiring girlfriends in every small town, while Yellow Hair becomes the tribe's pre-eminent warrior.  Early in the film she uses her fighting-skills to fend off a male suitor who challenges her, and it's plain from Yellow Hair's conversations with Grey Cloud that she's learned to fight so that she won't live the life of a squaw-- though she doesn't seem to have any better goal in mind.

Pecos gets in dutch with the commander of the Mexican militia, partly because he's claimed to have information about the Tulpan.  When Yellow Hair finds out about Pecos being in captivity, she sneaks into the compound and breaks Pecos free in the film's best action-sequence.  The commander retaliates by sending some of his men, led by the Comanchero Flores, to the Comanche camp, where Flores murders Grey Cloud.  While Yellow Hair seeks vengeance on the commander's forces, she also becomes intrigued by the "Fortress of Gold" when an old seer tells her that her true parents came from the Tulpan sanctuary.

After a number of lively-- but low-cost-- action-scenes, Yellow Hair and Pecos manage to enter the mountain sanctum of the Tulpan.  Yellow Hair naively accepts the apparent welcome of the lost tribe and vows to remain with her parents' people.  Pecos leaves for the outside world, but doubles back, in time to rescue his quasi-sister when she learns that the Tulpan plan to turn her into a golden statue.

Though the action is not lively enough to grab anyone not already in the mood for a RAIDERS-lite flick, YELLOW HAIR is serviceable in that regard.  There's a passing suggestion that the two quasi-siblings may have a thing for each other: Yellow Hair seems jealous of Pecos' many trysts, and in one scene she claims that Pecos once tried to see her without her clothes.  Though he claims that it was only to verify whether she was male or female, the issue is dropped and no romantic liaison takes place, though they're implicitly together at film's end.  The fact that the male is allowed many sexual encounters while the female is occupied in defending her chastity incarnates a certain prevalent sociological myth about male-female dynamics, though this too is not explored in any depth.
Posted by Gene Phillips at 3:12 PM
Email ThisBlogThis!Share to TwitterShare to FacebookShare to Pinterest
Labels: combative adventures, the marvelous