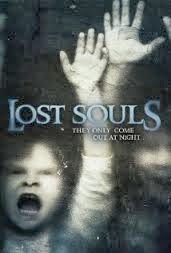 
Not long ago I got a temporary freebie for the HBO channels, and my first complaint was that all of the channels were recycling stuff from the 90s.  When I had HBO in the 90s, I knew that incarnation showed a lot of trash, but at least it was NEW trash.

Then, while cleaning off some old tapes, I come across two specimens of cheap nineties flicks that came close to eradicating any nostalgia I had for the period, at least in terms of the horror genre.

Neither film is any good, but of the two, LOST SOULS rates lower.  This is a dreary Canadian-made telemovie which reminded me slightly of 1976's BURNT OFFERINGS, wherein a rather bland American family moved into a old house in the country and promptly began encountering strange phenomena.

The Robinsons are the family in question here, and the only interesting thing about them is that their 12-year-old daughter Meaghan, an autistic, begins to show greater signs of involvement once they move into the house.  The parents and their other child, a teen boy, don't have to deal with any of the real-world problems attendant on dealing with even a high-functioning autistic, so in effect Meaghan is just another predictable excuse for a "weird kid" who makes contact with the spirit world a la POLTERGEIST.  At least the player chosen for the role, British child-actress Laura Harling, managed to make her character interesting despite her largely withdrawn nature.  This is more than the script did for any of the other characters, particularly headliners John Savage and Barbara Sukowa.

The essence of the script is the old "ghosts trying to direct the living to their real killer" schtick, and it proceeds with reasonable logic from plot point A to plot point B.  The most entertaining aspect of the telefilm is that at the climax, when the real killer reveals himself and the ghosts come out to finish him, the film's budget was too low to allow for FX of any kind.  So the killer just hears the ghosts screaming in his ears, causing him to fall to his death. 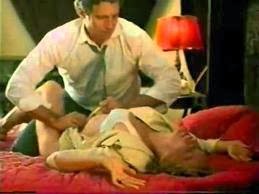 As Number Two (in every sense) begins, heiress Jennifer is now being haunted by memories of her husband Baxter, who returns in her dreams with a ghoulish demon-face, threatening to finish her off.  She consults with an impotent psychiatrist (David Warner) who can only give her various drugs.  But legal affairs, conducted in part by "Count Yorga" (Robert Quarry), must go on, and Baxter's brother-in-law Bill arrives with his wife to hear the reading of Baxter's will.  Then Jennifer starts seeing Old Demon-Face running around in the real world.  Has poor Jennifer flown round the bend?

Of course not: it's Colonel Mustard in the Living Room with a Demon-Face Mask.  But oh wait, Colonel Mustard gets killed, so it's really Mrs. Peacock with a claw-hammer who's the main villain.  The brief attempt to gaslight poor Jennifer by making her dream-demon come to life qualifies this film for uncanny status in terms of the "phantasmal figurations" trope, while Jennifer's traumatized nuttiness qualifies the film for the "perilous psycho" trope.  Incidentally, starring actress Tracy Brooks Swope manages to make her character pathetic rather than sympathetic. Perhaps the film's writers felt the same way toward the character, for in contrast to the plots of most supposedly erotic thrillers, this one ends with the gaslight-girl still crazy and seeing real-world demons.  Maybe it was director Ray's intention to suggest that the demons were real after all, but there's no support for that view in the script.  Also, the sex-scenes are among the most perfunctory I've ever seen in this sort of flick.

The only pleasures one can get from this are two: (1) spotting actors known for better roles elsewhere, and (2) a longish three-way cat-fight involving star Swope, her nurse Jennifer Ciesar, and former "RED SONJA villain" Sandahl Bergman.
Posted by Gene Phillips at 1:55 PM
Email ThisBlogThis!Share to TwitterShare to FacebookShare to Pinterest
Labels: perilous psychos (u), phantasmal figurations (u), the marvelous, the uncanny