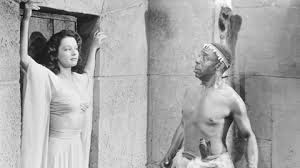 
Some Hollywood films were caught flat-footed when World War II ended, at least in Europe, in June 1945. Busy turning out melodramas in which the Nazi menace was still extant, they had to "back-date" the films to keep them relevant.

That doesn't seem to be the case with JUNGLE QUEEN, which was released in January 1945 but set its narrative near the beginning of the war, in 1939.  Were the filmmakers unusually prescient regarding the disposition of the war?  Or could it be that, given that the story's action took place in Africa, they realized that the plot had little in common with the real war's history?  The fact that the script coined an ambiguous term for the area in which the story takes place-- calling it "Middle Africa"-- suggests that the producers were saying, "Well, things could have happened this way if the Nazis had wanted to gain control of Central Africa."

Of course it would have been cost-prohibitive for a serial to mount an invasion comparable to the Afrika Korps' movements into North Africa.  JUNGLE QUEEN follows a pattern seen in most American jungle-films-- particularly the Tarzan opus-- in that the villains seek to insinuate themselves into local African politics by suborning their tribal customs.  Thus a group of interrelated tribes called "the Tongghiili" become the focus of Nazi espionage, Leading the Nazi agents-- though only rarely seen interacting with the Africans-- are Dr. Bork (Tala Birell) and Lang (Douglass Dumbrille).  The viewpoint protagonists are American adventurer Bob Elliott (Edward Norris) and his comedy-relief buddy Chuck (Eddie Quillan). They make common cause with Pamela Courtney, a British national who's come to the jungle, like many jungle-film female leads before her, to look for her lost father.  The three of them become the Nazis' primary foes, though not without some highly unusual help.

Another well-trod trope of jungle-films was that of "the white goddess." This was usually a purely mortal white woman who was taken in by some Black African tribe, who worshiped her because they'd never seen white people or for some equally unlikely reason.  JUNGLE QUEEN, however, is the first jungle-film I've seen where the white goddess, name of Lothel (Ruth Roman), does seem to have some claim to supernatural powers.

The viewer is never told just how Lothel comes to be looked upon as a spiritual adviser to the tribes of the Tonghilli.  Lothel, a woman garbed in flowing white robes, is first seen manifesting before the tribes in a great stone temple, walking across a field of  flame to show off her claim to goddesshood. Because there's currently a power vacuum in local Tonghilli politics, Lothel seeks to keep the reins of power out of the hands of "bad Africans" and in the hands of "good Africans." Of course there would be no story if the bad Africans didn't take power for a while.  So Lothel wafts her way out of the temple and shows up to aid Bob, Chuck and Pamela whenever they're endangered by either Nazis or bad Africans.

QUEEN has a bad reputation among serial fans.  There's no question that it suffers from a slack script and boring villains.  Yet whereas a lot of serials have been visually humdrum, I rather liked the way directors Lewis Collins and Ray Taylor kept focusing on the heroes in interesting visual setups, to enhance identification-- though I must admit that the villains don't get the same treatment, as they're usually sitting around yakking about their next strategies.  I also thought the black-and-white photography seemed crisper than one normally sees in most serials, making the actors look good even when they're not acting all that well (Norris) or are not trying too hard (Dumbrille).

One positive sociological myth-aspect of JUNGLE QUEEN is that although the overall political approach to the tribal cultures is patronizing even on the heroes' side-- that is, suggesting that the Africans are "good" if they are pro-Allies-- the script's approach to the native customs isn't especially condescending.  There's no suggestion that the "bad Africans" are bad because they embrace old tribal ways, because the "good Africans" embrace the same customs.  And whereas some jungle films make Black African natives look foolish when they conflate either real or phony monsters with their ancestral spirits-- as one sees in PANTHER GIRL OF THE KONGO -- JUNGLE QUEEN is innocent of that sin, because their "goddess" really does seem to be something supernormal.


Whereas most "white goddess" films are careful to emphasize that the goddess is a fake, JUNGLE QUEEN offers no explanation whatever for Lothel's nature, and even the white heroes remain clueless on that score by picture's end.  In addition to prancing around through vaulting flames, Lothel usually shows up whenever the good guys need her, and she can disappear the moment anyone looks away from her.  This leads to the serial's only genuinely funny moment, for though Eddie Quillan is the comedy relief, straight-man Norris gets the best joke when Lothel does another vanishing act on him, and he shrugs to the audience as if to say, "Got me again."  The ability to walk through fire and to do ninja-like vanishing tricks could be examples of "fake magic," and thus would belong to the domain of the uncanny.  However, in the serial's last episode, one of the Nazis fires point-blank at Lothel, with no effect on the goddess.  Immediately after this. the two of them are both consumed by an explosion, but Lothel survives to re-assume her role as guidance counselor to the Tongghili.  I suppose it's inevitable that a "white goddess" of any kind carries uncomfortable colonial associations, but the mere fact that JUNGLE QUEEN's script avoids the "fake goddess fools the natives" pitfall defuses some of those associations-- though of course it was a given that the script couldn't go to the other extreme, and portray Lothel as a LITERAL goddess. 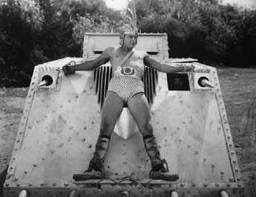 Oddly, though UNDERSEA KINGDOM-- Republic's attempt to duplicate Universal's success with FLASH GORDON-- is a much more expensive effort than JUNGLE QUEEN, I found that it lacked even the latter's minor charms, much less GORDON's mythic dimensions.

I appreciate that KINGDOM comes up with a lot more gosh-wow tinkertoys than most space-opera serials.  Its chapters are replete with robots, ray-guns, a battering-ram tank (which at one point has the hero spread-eagled on front of it, easily the serial's best moment), and a giant tower that rises from the sea to menace the modern world.  This sequence reminded me of Robert E. Howard's 1935 novel HOUR OF THE DRAGON, which also concerned a recrudescent archaic world that strove to replace the modern continuum.

However, FLASH GORDON-- both in the comic strip and the original serial-- showed some interest in the exotic worlds Flash visited as the hero attempted to sway the various races of Mongo against the tyrant Ming.  UNDERSEA KINGDOM is a little more on the programmatic side.

Hero Crash Corrigan and his allies voyage to the Undersea Kingdom of Atlantis for roughly the same reasons that Flash and his friends seek out Mongo; investigating the genesis of mysterious phenomena in their world.  In GORDON, Ming is responsible for causing chaos on Earth, while in KINGDOM, a tyrant with the risible name "Unga Khan" has been creating earthquakes on the surface world as a prelude to his attempt at conquest.  In both serial-stories, the scientist-member of the hero's team is seized by the tyrant, who seeks to use his talents to promote his agenda.

But KINGDOM has no interest in the world of Atlantis as GORDON showed interest in the exotica of Mongo.  Atlantis could pretty much be any old Ruritanian kingdom, and the script may be poking fun at its own good/bad simplicity in naming the good faction "the White Robes" while the allies of Unga Khan are "the Black Robes."  To be sure, in one episode a  Black Robe is converted to the side of the angels when Corrigan spares his life.  But it doesn't do the fellow-- oddly given the name of an "evil" pagan deity, "Moloch"-- much good, because by the serial's end all the bloody Atlanteans, good and bad, bite the bullet.

Perhaps this, more than anything, accounts for my negative feelings toward the serial.  Flash Gordon's Mongo is a great though utterly inconsistent dream-world, where any sort of weirdness is possible.  The producers of UNDERSEA KINGDOM seem strangely in a hurry to dispose of their dream-world, as if its presence threatened the hegemony of their real world, not just the serial's version of reality.

Corrigan is a competent serial-hero, who almost never resorts to a ray-gun if he can use his fists or wrestling-moves to win a battle.  But he lacks the charisma that Buster Crabbe displayed in his first serial outing, and his companions are similarly routine.  Despite having two comics to supply the funny stuff-- with the hilarious names "Salty" and "Briny Deep"-- their routines probably could have been excised without anyone noticing the lack.

Posted by Gene Phillips at 3:26 PM
Email ThisBlogThis!Share to TwitterShare to FacebookShare to Pinterest
Labels: combative adventures, the marvelous