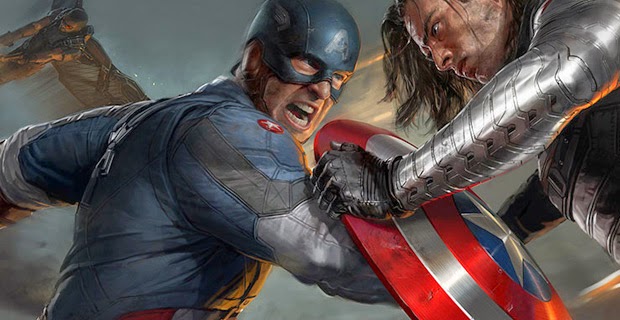 CAPTAIN AMERICA: THE WINTER SOLDIER, based on an Ed Brubaker-Steve Epting graphic novel (which I have not read), is a much more satisfying action-opus than the uneven CAPTAIN AMERICA: THE FIRST AVENGER. Because I've always considered that the comics-hero's greatest strength lay in his flights of fantasy-- at best tempered by considerations of reality and verisimilitude-- I wrote that FIRST AVENGER proved "untrue to its own potential as a fantasy-film."

SOLDIER is on much more solid ground in its admixture of fantasy and verisimilitude.  FIRST AVENGER's action-sequences were tolerable at best, but the producers of SOLDIER have made a concerted attempt to beef up both the fight-scenes and the explosive FX.  No one re-invents the wheel here, but the repeated battles between the hero and his main opponent, a master assassin known as "the Winter Soldier," show much more ingenuity than the desultory fistfight battle between the Captain and the red Skull in the earlier film.

The most interesting aspect of SOLDIER is that it tries to walk a tightrope between paying honor to the American military and questioning the fetishization of absolute military security that has dominated American politics since the events of 9-11. Like the anti-drone rhetoric of STAR TREK: INTO DARKNESS, the script of SOLDIER aims to reflect liberal sociological concerns about government transparency within the context of what many would deem a "popcorn movie." On its own terms, SOLDIER does a reasonably good job.  Captain America, an artificially preserved member of "the Greatest Generation," isn't just uncomfortable about being a dinosaur in a later era, as the Captain was during his rebirth in the Marvel Comics of the 1960s.  Rather, he reflects an ethos of fair play that doesn't hold with attacking supposed enemies before they attack you. In an early scene SHIELD honcho Nick Fury shows off the organization's new toys: armed-to-the-teeth helicarriers capable of pre-emptively targeting the enemies of America. The Captain disagrees with this principle, even as he shows disgust for the tendency of security organizations to withhold information to their agents, or even to actively lie to them.

The helicarrier scene sets up a somewhat predictable trope possibly borrowed from Brian Singer's 2003 film X2: X MEN UNITED.  In that film the technology that has been set up to target mutants, the supposed enemies of humanity, is suborned by Magneto and almost annihilates all normal humans on Earth.  I don't imagine too many audience-members were surprised by SOLDIER's denouement, in which the spiffy new super-weapons are taken over by evildoers operating within SHIELD. I suppose a liberal purist might object that any anti-conservative message in SOLDIER is compromised by the also-unsurprising fact that "rogue SHIELD" is actually a recrudescence of the Nazi science-unit Hydra from the previous film.  As a corrective to the possible interpretation that all evil conspiracies come down to "Nazis hiding under the bed," the film's coda shows former Nazi Baron Strucker blithely asserting, "HYDRA, S.H.I.E.L.D., two sides of a coin that's no longer currency."

Nick Fury, initially poised as the spectre of overzealous security, is himself targeted for assassination in an action-packed scenario. Fury escapes, only to be apparently taken down by the mysterious Winter Soldier-- making one wonder why the Soldier's bosses didn't assign this master assassin from the start.  The Captain, with help from SHIELD-agent Black Widow and a pararescue soldier named Wilson (loosely recapitulating comics-Cap's partner the Falcon), seeks the reasons for Fury's assassination. They eventually find their to Alexander Pierce (Robert Redford in his first, and probably last, superhero movie).  One aspect of the climax involves a turnabout on the current controversy regarding governmental "data mining" and its role in empowering the helicarrier's targeting computers; the film's answer to this is to advocate a transparency that might cause even Edward Snowden to think twice.

The first film enjoyed some snappy dialogue, but not consistently: SOLDIER does much better in keeping the snappy tone consistent, with only brief sojourns into pathos.  The personal bonding between Steve Rogers, Wilson and Black Widow is positioned as a clear antidote to inhuman security measures.  Rogers, a man out of his time, is confronted with one more survivor of his era, and it turns out to be his best friend, brainwashed into serving Hydra's regime.  Rogers' attempt to break through the friend's conditioning provides a better climax to the film than any of the multitudinous explosion-scenes.

Fans of Marvel continuity should be pleased with its minor touches, such as a passing allusion to Stephen Strange and Cap's early mano-a-mano with a terrorist named Batroc. Understandably the latter does not speak in "ze oh-so-fractured French dialect" of the Marvel costumed villain.  I can well understand Marvel not wanting to alienate French audiences with the kind of goofball accent the comics-character once sported, but-- did they have to go to the lengths of making the character into a Belgian as well?