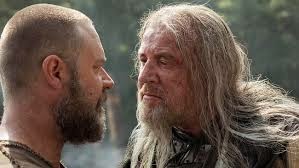 NOAH may not be the strangest religion-based film of all time, but it may well take the honor of "strangest film directly based on a canonical book of the Christian Bible." Even Robert Aldrich's subtly ironic 1962 work SODOM AND GOMORRAH pales by comparison.

That said, the script by Ari Handel and director Darren Aronofsky may be based in the story in the Old Testament, but it's clear from early scenes that the writers are only loosely adapting the Biblical story.  In the tradition of revenge-stories of all ages, this Noah is placed in the position of young Bruce Wayne, helpless to do anything when his father, the patriarch Lamech, is murdered by Tubal-Cain, a descendant of the original Cain.  But this is not pure melodrama. To their credit Handel and Aronofsky have sought to situate the conflict between Noah and his father's killer-- who will meet again when both are older men, and the world is about to be destroyed by flood-- in mythic terms relating to man's creation. Prior to the scenes of Lamech's murder, the film recites the familiar story of how Adam and Eve were beguiled by the Serpent and expelled from the Garden.  Most will be familiar with the next major event, in which Cain murders his brother Abel, but Aronofsky grounds this event in a context parallel to that of the Old Testament: that of familial descent. The third son of Adam and Eve, one Seth, in essence takes the place of the murdered Abel, so that two lines of patriarchal descent are responsible for the human race that follows-- lines which in some ways mirror one another:

six of the names in Cain's family in Gen. 4 are very similar or identical to six of the names in Seth's family in Gen. 5.  In Cain's family, we find the names of Cain (Kayin), Enoch (Chanok), Irad (Yirad), Mehujael (Mechuyael), Methusael (Methushael), and Lamech (Lemek)  In Seth's family, we find Cainan (Kenan), Mahalaleel (Mahalal'el), Jared (Yered), Enoch (Chanok), Methuselah (Methushelach), and Lamech (Lemek). --CAIN AND HIS FAMILY, Jared L. Olar.


Aronofsky's script then expands upon this conceit of rival families in a way no Noah-adaptation ever did before.  In the film the offspring of Seth, though mortal and far from perfect, give rise to the righteous family of Lamech, his still-living grandfather Methuselah, his son Noah and Noah's sons. It's unclear from the film as to whether the cinematic Seth founded the sort of tribes credited to his Biblical forbear. However, Cain's descendants have definitely become the same sort of full-fledged tribe that patriarchs in the Old Testament usually produced.  The children of Cain-- including the new patriarch Tubal-Cain-- have become masters of metalworking and primitive technology.  The association of Tubal-Cain with metalworking is wholly in tune with his Biblical model, as noted here, but the script expands upon this mythic detail and makes of it the central cause of the "wickedness" for which the Creator destroys the world. The Biblical Noah story does not expatiate upon the crimes of mankind, though it seems unlikely that technological hubris was on the minds of the ancient chroniclers. What we have, rather, is a philosophical juxtaposition of two mythic figures that are relevant to modern mankind's conception of itself.

Noah is, in essence, the archaic version of an "eco-terrorist." He does not bring about the cleansing of most of the world's living beings, but as a result of his being made a party to it, he convinces himself-- apparently with no input from God on the matter-- that he knows God's purpose for the aftermath of the devastation.  The patriarch conceives the idea that God only entrusts Noah with the duty of building the Ark so that the pure and innocent animals will be spared, while he intends that humanity will die out when Noah's family perishes.  This patently reverses the sentiments expressed in Genesis 1:28 (King James version):

And God blessed them, and God said unto them, Be fruitful, and multiply, and replenish the earth, and subdue it: and have dominion over the fish of the sea, and over the fowl of the air, and over every living thing that moveth upon the earth.


The only "subduing" in this radical departure is attributed to Noah's enemy Tubal-Cain.  In keeping with the ruthless acts of his remote ancestor, Tubal-Cain is the mythic opposition to the eco-terrorist: the eco-plunderer, who thoughtlessly pillages the land and other peoples of their riches for his own benefit, and whose will to prosper is in stark contrast to Noah's will to extinguish himself.

The philosophical argument of the two patriarchs is then worked out, not by through reflection or discussion, but through Noah's status as the somewhat unwilling begetter of the next generation.  In Genesis, Noah's three sons-- Shem, Ham, and Japheth-- are the vehicles through which the world is repopulated, though just as with Cain and Seth, one never quite knows where their wives come from. The movie NOAH, however, grapples with the question of the female role in procreation more overtly, both for reasons of verisimilitude and as an exploration of Noah's animus toward human life.

Whereas the original story includes but does not name Noah's wife, NOAH bestows the name "Naameh" on the wife and also includes a new character: young Ila, an orphaned girl who has been taken into Noah's family and who has become more or less betrothed to the oldest son Shem. Noah, who has not revealed his conception of humanity's fate to any family member, allows this dalliance because Ila is known to be barren. By the same token Noah will not encourage Ham, the second-oldest, to take a wife, in part because it might result in a continuation of the race.  Youngest son Japheth is too young to feel the same mating-urges as Shem and Ham, so that he becomes for the most part irrelevant to the narrative.

The actual building of the Ark is rendered secondary to all of these tumultuous familial conflicts, though as a possible sop to the selling-point of SPFX in Hollywood films, Aronofsky includes an element found only in apocryphal Noah-stories: he has giants build the Ark. The script references the mating of mortals and angels cited in Genesis 6:1-4, but Aronofsky's giants-- who look like multi-armed, rock-bodied Transformers-- are also depicted as fallen angels, in that their essence returns to heaven when they are slain.  Their role in the story allows for some interesting moments, but their main function seems to be to beef up the spectacle in the film.

Similarly, the Ark itself and the animals it carries are also marginalized somewhat.  Most adaptations of the Noah story are replete with explanations of how Noah's family cares for the various species-pairs, but Aronofsky dispenses with this expectation through an ingenious solution: a soporific drug hurls all the animals into hibernation. This leaves the Ark free to be a battleground of family-emotions. Ham's resentment about being denied a wife leads him to bring Noah's worst enemy into the Ark, while Ila receives a boon from her adoptive grandfather Methuselah, a boon which throws Noah's carefully prepared scheme into chaos.

It's amusing to see the inspiring if sedate deluge-tale turned into a combative drama between two opposed ways of life, and surely Aronofsky and Russell Crowe have earned some distinction for producing the world's first "kickass" version of Noah. That said, the main concern is to show Noah's obsession in a new light, one in which his righteousness becomes more alienating than Tubal-Cain's unreflective but entertaining villainy. At one point the villain bites the head of one of the preserved species, dooming the creature to extinction: yet I imagine most audiences will be amused, rather than repulsed, by his selfish will to survive.

In conclusion, I have to admit that while Aronofsky's Bible-movie is far more interesting than most within this genre, I was never entirely swept away by it. NOAH fails to be more than the sum of its parts, and many sequences fail to deliver much beyond puzzlement, such as Lamech's peculiar ritual with a snake-skin, possibly the skin from the Serpent in Eden, and the concluding coda, which seeks to rationalize Noah's canonical reputation for drunkenness.  I suspect that some of these enigmatic sections were the result of a team of research assistants, sifting through myths canonical and apocryphal to find new takes on the Noah story.  Still, at a time when so many films are tedious rote assemblages of "high-concept" schticks, a few rough edges shouldn't be despised.

Posted by Gene Phillips at 3:16 PM
Email ThisBlogThis!Share to TwitterShare to FacebookShare to Pinterest
Labels: combative dramas, the marvelous