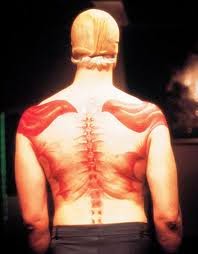 "And if one does what God does enough times, one will become as God is."-- Hannibal Lecter.


As I mentioned in my review of THE SILENCE OF THE LAMBS, I have not read the book on which that film was based. Similarly, I have not read RED DRAGON, the novel that introduced the character of Hannibal Lecter, so I don't know how closely the film MANHUNTER follows the book, and I have yet to see the 2002 film adaptation.

All that said, I prefer director Michael Mann's take on the Thomas Harris world of serial killers to that of Jonathan Demme in SILENCE. In my review of the later film, I remarked: 'At times, indeed, SILENCE may be a little overly composed, thumbing the tub for feminist psychological interpretations of male-female "difference."'

In contrast, MANHUNTER deals more explicitly with the nature of the serial killer.  As the quote above suggests, the serial killer murders so that he can feel like God, whom Lecter pictures as a vindictive deity, taking pleasure every time a plane goes down or a natural catastrophe extinguishes multiple lives.  Lecter's own crimes are barely referenced in MANHUNTER, and he remains imprisoned for the entirety of the film, acting as an insidious mentor to a younger serial killer, who shares Lecter's belief that the act of murder transfigures the murderer.

Killer Francis Dollarhyde calls himself "the Red Dragon" though investigators have given him the demeaning name of "the Tooth Fairy" because he leaves bite-marks on his victims.  Mann, who also wrote MANHUNTER's screenplay, is a little obscure as to Dollarhyde's reasons for identifying with a specific dragon from a famous William Blake painting-series, though the identification leads the killer to sport the tattoo of a dragon on his back.  He only displays the tattoo once in the film, as well as donning a mask, an "outré outfit" that he displays for the benefit of a reporter he plans to kill. Thus the killer's purpose for using this colorful attire is not to disguise his identity, but to invoke awe in the man before he dies, so that Dollarhyde can be seen as an all-powerful deity.

For the hero as well as the villain, the act of seeing is more crucial in MANHUNTER than in SILENCE OF THE LAMBS. Celebrated profiler Will Graham is guilted into joining the "Tooth Fairy" investigation even though he has retired from the FBI following two signal accomplishments: shooting down one serial killer and capturing another, the aforementioned Lecter.  As essayed with William Petersen, Graham is a man with a rare talent to see into the minds of mass murderers, but the experience has left him haunted by his sense of commonality with these monsters.  Graham has even been forced to go through psychological therapy to subdue his demons, demons he must summon forth again in order to understand the insanity of the Tooth Fairy. He consults with the imprisoned Doctor Lecter, ostensibly for Lecter's advice on the case but in reality to "jump-start" his own power to identify with the murderous mind.  Lecter does inadvertently provide the FBI with a lead in the case, but Graham pays a price for this assistance: Lecter mocks Graham with the knowledge that Graham too has taken pleasure in dealing out death, helping to push Graham toward the edge.

One of Graham's theories about the Tooth Fairy is that he was molested by a parent as a child, making the killer impotent in normal relationships and fueling his desire for godhood.  A less skilled writer-director would probably confirm this for an audience by having the killer experience flashbacks of his wretched past, but Mann only suggests the correctness of Graham's theory through Dollarhyde's botched relationship with a blind co-worker. Presumably this plotline appears in the novel also, but Mann brings his own unique cinematic approach to the storyline, through his use of a monochromatic color palette to emphasize specific moods. Of particular note are the all-white walls of the asylum where Lecter-- also clad in white-- resides.  I don't know of any scene that has succeeded so well in giving whiteness a sinister cast, as the scene in which Graham, overwhelmed by Lecter's corrosive personality, flees the asylum with stark white walls on every side of him.

While many contemporary films may treat serial killers in an entirely naturalistic manner-- such as 1999's EYE OF THE BEHOLDER, linked with my SILENCE review above-- there's little doubt in my mind that this is a psycho-film in the uncanny mode, as it deals with a killer who sees himself as abrogating the power of God and/or a dragon-- an ironic association, given that in Revelations the Great Dragon is the opponent of God. The climax features a violent gun-battle between Graham and Dollarhyde, so that I briefly considered that MANHUNTER might also fit the combative mode. I decided that the film did not fit that mode due to the brevity of the violent conflict.


Posted by Gene Phillips at 3:14 PM
Email ThisBlogThis!Share to TwitterShare to FacebookShare to Pinterest
Labels: outre outfits (u), perilous psychos (u), the uncanny