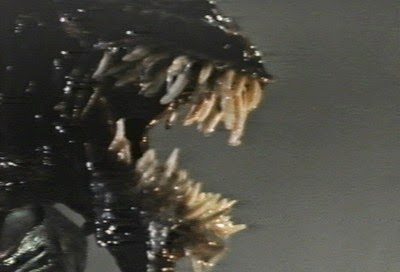 
DEEP SPACE is an even bigger waste of time than Fred Olen Ray's Egyptian-themed junkfest from the previous year, THE TOMB.  I'm amazed that I've seen a few affectionate reviews for it, since in my opinion it didn't even do a good job in terms of Ray's signature strategy: that of taking a derivative script and salting it with assorted well-known jobbing actors. Here the familiar faces include lead hero Charles Napier, Ron Glass, Bo Svenson, Ann Turkel, and Julie Newmar. While a bio-engineered imitation-ALIEN wanders around a generic big city killing generic victims, Ray fills in time with such sights as Napier playing the bagpipes to make Turkel take her clothes off, and Newmar as a psychic who's barely in the film except for a couple of scenes where she talks to Napier on the phone.

With the latter role in mind, I can state that I have only one reason for writing even this much about this turkey, and that reason is to raise this question:

"If all of Julie Newmar's scenes show her using the phone, then regardless of the goodness or badness of her performance, isn't it correct to say that she 'phoned in her performance?'"
Posted by Gene Phillips at 3:34 PM
Email ThisBlogThis!Share to TwitterShare to FacebookShare to Pinterest
Labels: the marvelous