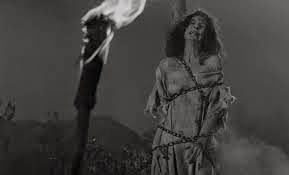 
Although evil witches were stock villains in prose horror-stories, sound cinema endured for roughly thirty years before the modern-day witch became a major player in horror films.  The year 1960 premiered, within a month of one another, Mario Bava's BLACK SUNDAY and John Llewellyn Moxey's CITY OF THE DEAD, aka HORROR HOTEL. It's unlikely either influenced the other, but both contain witches who lived in the 15th century, got burned at the stake and somehow survived to wreak evil in the 20th century.  Bava's film is unquestionably superior, but HORROR HOTEL makes stronger use of the Christians-vs.-Satanists theme; a theme that would become dominant as the 1960s produced more witch and/or Satanist horror films.

Like BLACK SUNDAY, HOTEL opens with a female witch being executed by burning. Where in SUNDAY the witch and her male companion perish together by the hands of a European inquisition, in HOTEL witchy Elizabeth Selwyn is burned alone by the irate pilgrims of Whitewood, Massachusetts. Elizabeth almost blows the cover of her fellow conjurer Jethrow Keane by calling out to him. He denies having any knowledge of the accused woman, a plot-thread which sounds like a setup for some resentment on the witch's part. However, as the film unfolds, apparently Satan's power smooths over any differences the two witches might have had. By 1960 both Selwyn and Keane are still alive through some devilish immortality-ritual.  They hold court in the isolated town of Whitewood, where they sacrifice selected victims twice annually, once at "Candlemas" in February, and again at "the Witch's Sabbath," possibly the film's name for Samhain/Halloween.

The audience never knows how the witch-cult has gathered its victims in the past, but the newest victim, Nan Barlow, is urged to visit Whitewood by her teacher Professor Driscoll (Christopher Lee). Nan's brother Richard and her boyfriend Bill both show rationalistic aversion to the idea of modern-day witchcraft and scoff at Driscoll's fascination with the subject. For Nan's part, she's not personally interested in the topic: she merely wants to do her thesis on a promising anthropological subject. So off Nan goes to Whitewood, where she has various slightly spooky encounters, including a conversation with a priest who claims that he's the only practicing Christian in town, and that all of Whitewood-- about ten people, from what the audience sees-- is consecrated to Satan. By the end of the film Driscoll has joined his witch-buddies for the big sacrifice. The righteous priest is killed, but he passes down a commandment to Nan's rationalist brother to literally bear a cross against the devotees of the devil.

Though there are slow spots in Moxey's HOTEL, and the religious themes are superficial, Moxey compensates with some tense scenes, creating spookiness on what must have been a rather humble budget.  One of the best scenes in the early part of the film shows Nan driving along a fogbound road to Whitewood, where she picks up a  weird stranger that the audience will recognize as the still-living warlock Keane.  However, after three more of these fogbound car-scenes-- with secondary female Patricia, with brother Richard and with boyfriend Bill-- the viewer may get a little weary of the fog. The fog-road also spawns a continuity problem. First Richard drives his car to Whitewood, looking to rescue Patricia, and nothing happens to him. Then, apparently the same day, Bill drives the same route, and the evil Elizabeth enspells him so that his car crashes.  Was Richard spared because Elizabeth's crystal ball was on the fritz at the time?

I also found myself wondering how the aged priest, who lost his sight to the witches' evil magic, survived for an unspecified number of years in the town. Since he states that he has no parishioners, there's no one to pay him a salary wherewith to purchase his daily bread. The sketchy backstory mentions that the priest's wife has died prior to the film's beginning, which becomes relevant because this circumstance brings his grand-daughter Patricia to Whitewood. But it's still hard to imagine how either of them could eke out a living in a town dedicated to the devil.

Still, the big climax saves the film from its more mediocre moments.  Lee, in one of the many supporting roles that followed his star-turns as "Dracula" and "Kharis the Mummy," exudes far more sinister charisma than the principal menace provided by Patricia Jessel. 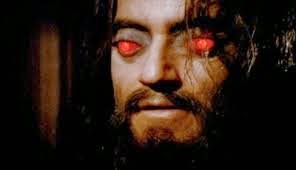 HORROR EXPRESS is a favorite 1970s film, due to its teaming of frequent favorites Christopher Lee and Peter Cushing.  That said, it's a fairly thin thriller. About a year later, the two stars would make a more interesting film pursuing a roughly similar theme, THE CREEPING FLESH. But whereas that film had a theme, however well executed, about man's place in the universe, EXPRESS is just a roller-coaster ride that happens to take place on a train.

In 1906 China, Lee's "Professor Saxton" unearths the ice-preserved body of an apelike man, which he theorizes may be of anthropological signifance. He crates it up and boards the Trans-Siberian Express, planning to take the ancient corpse back to England. By coincidence his colleague Wells (Peter Cushing) happens to be on the same train with his female assistant, as are many other semi-colorful characters: a Russian count and countess, their "spiritual advisor," a devious female spy, and a police inspector who becomes embroiled in solving various murders on the Express.

The culprit is the ape-man, or, more precisely, a energy-alien whose people explored Earth in ancient times. The alien, capable of inhabiting human forms, became trapped in the ape-man's dead body when it was buried in ice.  Now that the creature is free, it starts transferring into other bodies, which it can do whenever its eyes glow in the dark.  This limitation is one of the script's big problems: why would the alien need darkness to make the transfer? I suspect the only real reason was to give emphasis to the visual impact in which the possessed person's eyes glow. In addition, the alien can also suck the memories of anyone he encounters into himself, which causes the victims' brains to "smooth out" before they perish.

The concept of a body-hopping presence has seen better executions both in prose and in film, particularly because EXPRESS' budget doesn't allow for anything more than (1) bleeding eyes or (2) the opaque eyes of a memory-sucked brain. This is the sort of project that would have been perfect for the makeup/FX breakthroughs seen in horror-films of the 1980s.  None of the characters, including those of Lee and Cushing, register as anything but Johnny or Janey One-Notes, though Cushing gets the film's best line.  When an official accuses Wells and Saxton of possibly being the body-skipping monster, Wells replies, "Monsters? We're British!"

Though Lee, Cushing, and Telly Savalas were unquestionably the selling-points for the thriller, I found myself wondering if it would have been a better film had it concentrated on the Rasputin-like presence of Pujardov, the "pet monk" of the two royal Russians. Initially Pujardov has an almost psychic foreknowledge of the danger in Saxton's cargo, and he reviles it as a tool of the devil. Halfway through the film, though, Pujardov becomes intoxicated with the power of "Satan" and not only serves the alien, he willfully invites the creature to invade him.  I don't know if a film about a Russian priest's spiritual struggle would have been any better than a simple thrill-ride, though. There's a suggestion of a plot in which the alien hopes to use human technology to escape Earth but it never leads to much of anything.
Posted by Gene Phillips at 3:37 PM
Email ThisBlogThis!Share to TwitterShare to FacebookShare to Pinterest
Labels: the marvelous