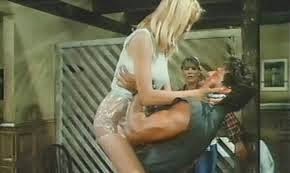 
Of the three films reviewed here, only the last of them sustains a "fair" level of symbolic discourse, which I term "mythicity." That said, WHEN WORLDS COLLIDE is the least entertaining of the three.

When I was an adolescent SF-fan, I probably would have automatically validated COLLIDE as the best of the three, not because of its symbolic discourse but because it looked like a "class act," with moderately impressive FX and a literate script. Over time, though, I've often found more "myth-matters" in relatively cheap or marginalized works.

That said, the only myths in Sergio Martino's HANDS OF STEEL are those swiped from 1984's THE TERMINATOR and any number of Mad Max imitations. To be sure, Martino reverses TERMINATOR's pattern, in which a pair of beleaguered humans seek to escape a remorseless android.  Here the hero, the oddly named "Paco Queruak," is a man who was turned into a cyborg by an evil scientific project, and who goes on the run, hiding in a human community in desolate Arizona to escape. Most of the hunters sent after Paco by evil project-head Turner (John Saxon) are humans, with the exception of a female cyborg (seen above) who gives Paco a rough time,. and not in a good way.

Derivative as STEEL is, it has some oddball touches that redeem it. When Paco hides out in the Arizona sticks, he encounters a bunch of rednecks, one of whom is played by George Eastman, essaying his usual macho bully-boy. But for a small change, Paco settles most of his conflicts with the rednecks by beating them in arm-wrestling contests. This has caused just about every online review of STEEL to reference Sly Stallone's slightly later arm-wrestling movie, OVER THE TOP.

Aside from that minor distinction, I can't say STEEL delivers a lot of action, even for its B-movie production levels, but there are some decent shootouts and one nice scene where super-strong Paco encounters a helmet-wearing gunman and simply punches through the helmet to pulp the head within.  Paco has a spunky almost-girlfriend who helps him mow down the hunters even though she seems to have no experience with firearms.  The climax is desultory but if one's expectations for Italian SF are low to start with, this isn't a major demerit.  Lead actor Daniel Greene shows no ability to play to audience's expectations of how an emotionaless cyborg might act, as Arnold Schwarzenegger did so nicely.  Still, Greene's lack of acting-charisma offers some extra amusement, though STEEL isn't "over the top" enough to make a "good bad movie."

STEEL is derivative, but at least it doesn't literally re-use footage, music and sounds from a previous film.  Producer Roger Corman decided to do this very thing by recycling elements from his 1980 STAR WARS rip-off, BATTLE BEYOND THE STARS.  That film channeled STAR WARS by way of THE MAGNIFICENT SEVEN, and is at least colorful enough to allow one to enjoy it as a "guilty pleasure."

SPACE RAIDERS, in contrast, only swipes one STAR WARS trope: that of the disreputable space-pirate who turns out to be a decent guy despite himself.  A ten-year-old boy named Peter accidentally stows away on the ship of space-pirate "Hawk" (Vince Edwards).  Neither Hawk nor his motley band of cutthroats are pleased by this development, but Hawk-- once a "space service" officer who has turned to crime-- ends up forming an attachment to the young boy.  In Edwards' best scene, Hawk explains to his unsympathetic crewmate Amanda: "He thinks I'm a hero. I'm just another loser trying to stay alive. But he's not gonna know it."

If BATTLE BEYOND THE STARS channeled THE MAGNIFICENT SEVEN, I suspect that the 1953 western SHANE was the key inspiration for SPACE RAIDERS.  In that film, Shane, a  gunfighter with a clouded past finds himself defending homesteaders against a cattle baron, in part because Shane has become a hero in the eyes of a young boy.  This concept might have made for a nice change of pace in the ranks of STAR WARS-imitators, but the script for RAIDERS merely hits all the predictable plot-points. Even the ending, where Hawk may be dying after he delivers Peter to safety, looks to be based on the famous conclusion of SHANE.  Edwards' performance has a few good moments, but all the rest is from hunger. 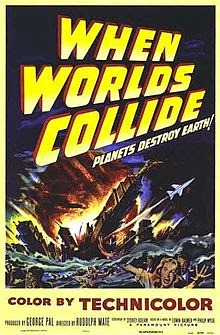 That said, I enjoyed WHEN WORLDS COLLIDE a little less than SPACE RAIDERS. I don't think that the 1951 film was a great favorite in the early days of my SF-fandom, but I can remember being reasonably enthralled with this SF-update of the Noah's Ark story. I never read the 1933 novel by Philip Wylie and Edwin Balmer, but I would imagine that the novel's scenario was substantially altered for 1950s audiences.

WHEN WORLDS COLLIDE was one of the decade's first "serious" films in this genre, coming out the same year as Hawks' THING FROM ANOTHER WORLD and a year after George Pal produced DESTINATION MOON, whose success may've led Pal to produce COLLIDE as well.  Unfortunately, COLLIDE doesn't hold up as well as either MOON or THING.

Of Philip Wylie's works I've only read the 1930 novel GLADIATOR, but from what I've read of him, Wylie's brand of science fiction was not allied to the expectations of 1930s pulp magazines; rather, it might be better termed "bestseller SF," in that it was written to a more catholic readership.  Certainly the film is replete with many bestseller tropes, particularly in its concentration on a romantic plotline. Viewpoint character Dave Randall is situated as an "average joe," a professional pilot who's incidentally drawn into witnessing the apocalypse. Randall has no interest in science or religion; upon taking a job for a group of scientists, Randall's only interested in being paid. He begins to be drawn into a personal connection when he forms an attraction with Joyce, daughter of Doctor Hendron-- despite the fact that Joyce already has a boyfriend. The film never tells us why Joyce falls out of love with Tony, though he is also a scientist-- a medical doctor-- so that the script may be emphasizing the importance of women choosing mates who are not too much like one's own father.

Hendron announces to the world that the planet Earth is doomed to be pulverized when it's struck by a star he names Bellus ("pretty" or "handsome" in Latin, though the main association may have been with Bellona, the Roman goddess of war).  However, Hendron also says that a portion of humanity may survive if they can build an ark that will take them to Zyra, a possibly habitable planet orbiting Bellus.  He advises everyone in the world to build arks to escape, though there are no successful attempts made by anyone except in America.

Hendron's humanitarian desire to preserve humankind is complicated when he needs the financial help of a ruthless financier, the crippled Stanton, to complete the ark-project.  Stanton takes the part of "devil" against Hendron's "angel," for Stanton tries to select the crew that will escape in the ark. Hendron denies him that privilege, stressing the need for deciding from the pool of the willing by lots.  Though Stanton accedes, his presence remains an irritant, as when his cruel treatment of a subordinate incites that man into trying to kill Stanton to take his place on the ark.  Even though Stanton shoots the subordinate in self-defense, the audience sees him even more strongly as the corruption infesting Earth, for which the disaster is kinda-sorta a punishment. It's no coincidence that the film opens with quotes from the Noah portion of Genesis, particularly the line about how "the way of all flesh had become evil on the earth."

I preferred Stanton's general meanness, though, to the dull lovemaking of Randall and Joyce, much less that of a secondary romantic couple in a "B-story."  In addition, someone in the film's production decided to really pile on the religious references. A voice-over tells us that the impending destruction causes people all over the globe to re-commit to their respective religions, but no tradition except Christianity is validated in the film, particularly since all of the people who survive Earth's destruction appear to be American WASPs. I've never subscribed to the notion that all films must be models of diversity, but I must admit that even I was uncomfortable with the film's utter lack of interest in any other cultures. For that matter, at the climax several individuals who don't get selected by lots storm the ark-- and not a single one of these individuals is female. Call me crazy, but I think it's equally possible that some women in such a situation might have been in that rebel group, rather than just passively awaiting the fall of the axe.

WHEN WORLDS COLLIDE, then, still benefits from a strong basic idea, but it's executed with little panache and no style.

Posted by Gene Phillips at 3:38 PM
Email ThisBlogThis!Share to TwitterShare to FacebookShare to Pinterest
Labels: combative adventures, the marvelous