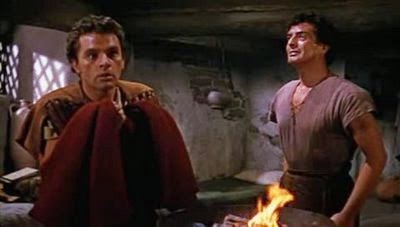 
Aside from the 2014 NOAH, the only quasi-Biblical film I've reviewed here is THE SILVER CHALICE,  which alludes to, but does not show, Christian miracles.  The original source novel for THE ROBE is based very loosely on a scriptural reference to a Roman soldier dicing for Jesus' garments, but owes more to the Gospel stories of Judas, the man who brings about Christ's death and suffers the torment of guilt because of his actions. But whereas Judas kills himself to escape his guilt, the ROBE's Roman soldier channels his guilt into becoming a spokesman for the glories of the Christian triumph over secular Roman tyranny. (Interestingly, only in the opening does the film allude to Roman religion, which is immediately dismissed for its carnal deities, ranging from "huntresses to drunkards.")


I should note that I was a believer in Christianity at least until the age of twelve. I didn't lose my faith as some do; I think I simply began to admire many of the features of other religious traditions, as well as the images of myth and fable.  So none of THE ROBE's proselytizing on behalf of Christianity impresses me in the way that the filmmakers intended to impress its target audience. That said, I can appreciate some of the mythopoeic aspects of this take on Christian beliefs.


The easy opposition expoused by the film-- Romans=tyranny, Christians=freedom-- is summarized by the relationship between the Roman tribune Marcellus (Richard Burton) and the Greek slave Demetrius (Victor Mature). Marcellus foils Demetrius' attempt to escape Roman captivity, and yet purchases the Greek to save him from the gladiatorial pit-- an act of "Christian charity" from a pagan consciously concerned only with drinking and wenching. Various complications lead Marcellus to a tour of duty in Palestine, and he takes his new slave with him. Demetrius is almost immediately converted to Christianity just from seeing Jesus on Palm Sunday, but Marcellus and his fellow Romans simply follow through with the execution of a condemned criminal. Marcellus is somewhat more affected at the moment of Jesus' death, but more so when he orders Demetrius to fling the newly-won robe over his shoulders to shield the tribune from the rain-- whereon Marcellus reacts as if he'd just come into contact with Heracles' robe of fire.


Of course, since Christian miracles are never to be conflated with magic, Demetrius later explains that the robe has no magic powers: the pain Marcellus feels stems not from the garment but from his own guilt-- which is the reason I say that the original author's concept of the Roman soldier is strongly informed by the narrative of Judas. Eventually, despite the Roman soldier's skepticism, he converts even as Demetrius has.  Demetrius fades out of the story while Marcellus is being impressed by the rectitude of the Christians he meets in Cana, but the Greek becomes important later when he's captured by the Romans. In a feat of swashbuckler-like action, Marcellus and a team of Christian commandos break into a Roman dungeon and liberate Demetrius. The ex-slave almost dies of his wounds anyway, only to be saved by the healing-powers-- or grace, if that is the proper word-- of Simon Peter, who brings Demetrius back from death-- the only miracle one witnesses on-screen.  Marcellus and his loyal female friend, however, perform an *imitatio dei* when they defy Roman power and insult the corrupt Emperor Caligula to his face, thus bringing on themselves the death penalty.  Demetrius lives on to appear in the 1954 film DEMETRIUS AND THE GLADIATORS.

THE ROBE is not a good film, even for its genre, being particularly weighed down by a flat, by-the-numbers performance by Burton. Indeed, though Mature also plays a one-note character, he invests his role with far more intensity.  It's interesting that although it's implicit that Jesus has risen from the dead by the time Marcellus goes on his quest to find Demetrius and the robe, there's little or no reference to this particular Christian miracle.  There are, however, copious mentions of Jesus' power to heal cripples and other afflicted persons. The film's script, presumably following the book in most respects, includes a cripple whom Jesus did not happen to heal, but who maintains a blissful devotion to God nonetheless-- apparently to provide an example of the proper attitude one should take when one doesn't receive divine intervention.

An interesting detail is that although the film's opening scorns the huntress-deity Diana, this is also the name the story gives to the beloved of Marcellus who scorns Caligula and chooses to meet death alongside her husband.  But the film's most mythopoeic revolves around Demetrius. When he interferes with Roman soldiers forcing Jesus to carry his cross to Calvary, the Greek is knocked out. When he awakes to the ministrations of a nameless female Jew, he briefly imagines that night has fallen-- only to be told that it's a "day not like any other," rendering the Scriptures' literal "darkness at noon" into a psychological metaphor.

Posted by Gene Phillips at 5:47 PM
Email ThisBlogThis!Share to TwitterShare to FacebookShare to Pinterest
Labels: the marvelous