SEXTON BLAKE AND THE HOODED TERROR (1938) 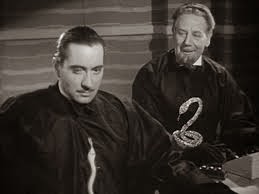 
Like most Americans I've had little acquaintance with the character Sexton Blake, a detective-adventurer who proved extraordinarily popular for many years in Great Britain.  One online essay asserts that some Blake stories are very ratiocinative, after the fashion of Sherlock Holmes, on whom Blake was conspicuously modeled.  However, other tales were much more action-packed than the majority of Conan Doyle's tales. HOODED TERROR follows the second pattern, possibly also imitating the comparative derring-do of Universal Studio's cinematic version of Holmes. If so, director George King-- who had already directed one Tod Slaughter film in 1936. and would direct others with the British horror-actor-- succeeded in his mission.

Whereas some of Holmes' movie-villains were uncanny in one way or another, none of them utilized the trope of the "costumed mystery-villain," as this one does.  Slaughter plays a refined fellow who is secretly the robe-wearing "Snake," who masterminds a criminal organization called "the Black Quorum." Even after watching the film I was somewhat uncertain about what they did aside from murder people who found out about them, but this perfidy is enough to get the heroic Sexton Blake (George Curzon) and his assistant on their trail.

Slaughter, often known for lip-smacking portraits of villainy, is fairly restrained in TERROR, both in his normal identity as a respected millionaire and as the devious Snake.  For my system the villain's use of fancy robes would be enough to qualify the film for the category of the uncanny, but in additional to "outré outfits" the evildoers also uses such gimmicks as a trap door that drops the hero into a convenient net and a "punishment room" filled with the Snake's namesake pets.  The only possible myth-motif here would be a sociological one regarding the villainy concealed by the British social order, but the script is too by-the-numbers to bring this theme to life.

Curzon is personable as Blake; this is the last of his three performances in a trio of 1930's films featuring the sleuth. But even though I can't quite find the script to be as imaginative as the best Holmes films from this period, George King is for me more the "star" of the show than Curzon or Slaughter.  Simple though the proceedings are, King's visual set-ups are engrossing even when very little is happening-- a quality rarely seen even in the more celebrated film-drectors.
Posted by Gene Phillips at 3:24 PM
Email ThisBlogThis!Share to TwitterShare to FacebookShare to Pinterest
Labels: bizarre crimes and crimefighting (u), combative adventures, diabolical devices (u), outre outfits (u), the uncanny