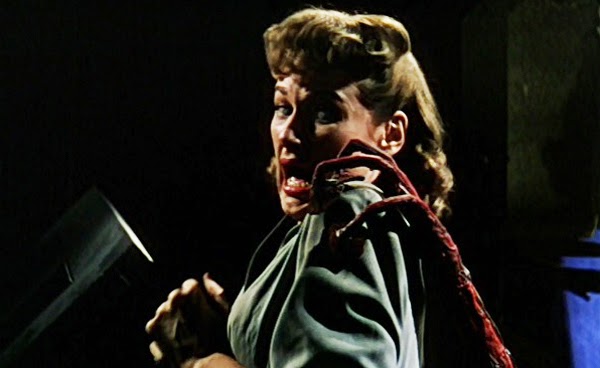 
Compared to the famed H.G. Wells novel, George Pal's 1953 WAR OF THE WORLDS sports a number of ironies. The novel's action is confined to England and barely alludes to the Martian's depredations in other Earth-domains. Some critics argue that Wells wanted his own people to feel what it was like to be invaded by beings with superior technology, the way many third-world tribes experienced British imperialism. Yet, although Pal and his collaborators widened the scope of H.G. Wells' famed novel in a literal sense, they narrowed it in a thematic sense. During Pal's WAR, we see images of the Martians' incursions in countries other than the United States, but they have all the depth of a tourist's snap-shots. This was pretty much standard for American SF-flicks of the 1950s, but a significant change that the invasion is not defeated by superior U.S. technology. but by its superior religiosity.

That said, Pal's upending of the irreligious themes of Wells' novel are at least more inventive than those of his previous SF-film. 1951's WHEN WORLDS COLLIDE evidently succeeded at the box office, or Pal probably would not have been allowed the duties of producer on WAR. But in my review of COLLIDE I found its stuffiness and cultural smugness almost intolerable:

...someone in the film's production decided to really pile on the religious references. A voice-over tells us that the impending destruction causes people all over the globe to re-commit to their respective religions, but no tradition except Christianity is validated in the film, particularly since all of the people who survive Earth's destruction appear to be American WASPs. I've never subscribed to the notion that all films must be models of diversity, but I must admit that even I was uncomfortable with the film's utter lack of interest in any other cultures.

WAR OF THE WORLDS' problems in these departments probably stem from Pal and his collaborators consciously or subconsciously modeling WAR's script on that of COLLIDE. However, even if WAR does end with a paean to the Christian faith, Lyndon's script gives his characters-- and they are nothing like Wells' characters-- names that are intriguingly suggestive of Christian mythology. Is it mere coincidence that the military commander is named "General Mann," making him a representative not only of mankind generally but of a specifically military aspect of Man in his fallen, post-Edenic state? This, if intentional, could coincide with the film's first spoken lines, in which a voiceover (Cedric Hardwicke) speaks of how the devices of technological man have "reached an unparalleled peak in their capacity for destruction," not far from the superior technology that is produced by "intellects vast and cool and unsympathetic." Some critics have aligned Pal's Martians with the Communist menace, but in the Martians' mastery of technology they hew closer to America's 1950s obsession with the military-industrial complex.

Contrary to the way of technological man is the way of Christian love, love so unconditional that Pastor Collins sacrifices his life. He does so after the Martians have already killed a handful of human beings, but Collins still holds to the possibility that they may not be beyond redemption.  The memorable scene in which the aliens fire upon Collins as he approached their buried machines with his Bible has much the same effect as if the Martians had fired on the bearer of a white flag: it marks them as utterly beyond redemption. In this context it's interesting that while Wells' novel claims that the Martians may be Earth-like humanoids who have undergone a process of physical atavism, Pal's Martians are said to be "primitive" by virtue of their anemic blood-- which may be a way of distancing them from good human stock.

General Mann and Pastor Collins, though, are supporting characters: what of the male and female leads?

Mann's name, which would be "Adam" in Biblical Hebrew, is reflected in the male lead's first name "Clayton" or "Clay," whose associations with the myth of the First Man should be evident. His surname "Forrester" is echoed in the first name of the female lead, Sylvia ("sylva"= Latin for "forest.") But since forests are not a major Christian symbol, the appearance of the word in the leads' names may be a subconscious displacement for a forest in its human-controlled form; i.e., a garden. I don't suggest that either Pal or Lyndon worked all of these symbolic allegiances out consciously. In contrast to WHEN WORLDS COLLIDE, WAR OF THE WORLDS succeeds whenever its conflicts become deep and elemental. This is even absent from the book, for the efforts of Wells' protagonist to find his wife pale beside the scenes of Clayton's struggle to be reunited with Sylvia. Even the riot-scenes in the film's last quarter work better than similar scenes in COLLIDE, in part because of the enforced separation of the two lovers.  Further, their separation may also be emblematic of man's separation from God, given the story Sylvia tells Clay about a childhood experience, wherein child Sylvia became lost and only "found her way" when she arrives at her pastor-uncle's church.

Byron Haskin's direction, coupled with some of the best FX of the decade, usually overcomes the script's potential for romantic treacle. The Martians' ships rank with the best representations of alien presences in the decade. The Martians themselves are not quite so appealing, however. Though the image of Sylvia accosted by a Martian sucker-arm remains impressive, that scene is undermined by the limitations of the puppet used to animate the Martian himself.

In the finale, Pal inverts Wells' ironic defeat of the Martians by Earth-germs, giving the same event the aura of Biblical triumphalism. But though it is an inversion, at least it's a damned clever one.
Posted by Gene Phillips at 1:50 PM
Email ThisBlogThis!Share to TwitterShare to FacebookShare to Pinterest
Labels: the marvelous