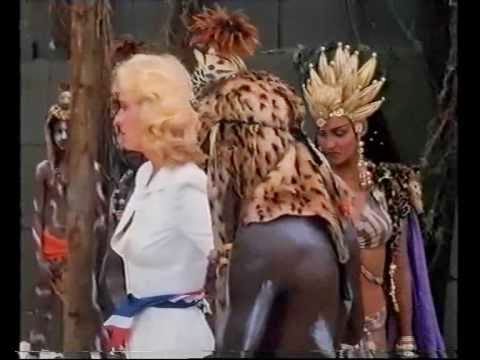 
I've seen only three or four excerpts from the "Jane" comic strip, which never saw syndication in the States but was extremely popular in Britain from 1932 to 1959, particularly during WWII. The foxy title character was deemed a "morale booster" for servicemen thanks to her recurring habit of getting stripped to her undergarments-- and occasionally more than that-- by a variety of comic circumstances.

The British-made JANE AND THE LOST CITY is probably the one incarnation of Jane that will be familiar to Americans. And though it's a cheesy, low-budget movie, it's got a freewheeling sense of humor about itself that makes up for any other shortcomings. The Holly-woods are full of bad films that try to do the same thing by being overly jokey about their own premises, but the script, from "Doctor Who" writer Mervyn Haisman, brings a modicum of wit to this low-rent RAIDERS.

I don't know how much of an adventure-heroine Jane may have been during the WWII years, but given her comic persona I'd tend to speculate that she was a lot like Brenda Starr: a virtuous girl who stumbled across spies and then got out trouble mostly by dumb luck. That said, the film does feature a villainess with the inspired name of "Lola Pagola," who did appear in the comic strip. So the status of the original Jane as "heroine" is outside my expertise.

The film begins during WWII, and both the British and the Germans are in need of working capital for the war. Jane (Kirsten Hughes) is seen in uniform at the movie's opening (WRAC, perhaps?), and serves under an officer known only as "the Colonel." At the instigation of Winston Churchill himself, Jane, the Colonel and the Colonel's manservant Tombs journey to Africa in search of a fabled "lost city" reputed to possess a fortune in diamonds. At the same time, a Nazi contingent-- made up of Lola Pagola (a sultry Maud Adams), a big German brute and a nasty little torturer-type-- also sets out on the same quest. If the movie wasn't so light-hearted, one might look askance at the fact that the Brits share the same imperialistic goal as the Nazis, though later the Colonel will claim that his people only want to "borrow" the diamonds.

The travels of Jane's group are complicated by Nazi assassins, though the killers invariably bumble their assignments. In one case Jane ends up making a ally of a handsome American white hunter, the winsomely named "Jungle Jack" Buck (Sam J. Jones, in what may be his best performance). Jack and Jane immediately make goo-goo eyes at one another, so Jack joins the group just in time for its first set-to with Lola's team.
The Nazis bungle most of their assaults here as well, though creepy Heinrich does put Jack into a death-trap from which Jane must rescue him.

Eventually the Allies-friendly group makes it to the lost city and meet the Leopard Queen, who turns out to have been educated in Old Blighty. Because of this she tolerates the Brits' desire to liberate her diamonds, but only because none of her people have been able to locate the gems in a hundred years. Again guided by dumb luck, Jane finds the diamonds after mucking about in an underground temple for a while.

The film comes to a lively confrontation aboard the Nazis' plane, as Jane and her crew come to blows with the bad guys. A representative highlight: though Jungle Jack gets beat down by the big German guy, Jane later gets mad at the German and knocks him unconscious with one adrenaline-fueled blow.

Despite this impressive moment, on the whole JANE AND THE LOST CITY is a subcombative comedy, whose level of fighting is close to the level seen in 1989's BRENDA STARR.  The lost city is the only metaphenomenal element in the narrative, being a fairly routine take on the "exotic lands and customs" trope. The same trope might take in any other African tribes Jane visits, except that none of those tribes are seen for more than a few moments.

JANE's mildly sexy humor won't be for everyone. However, given the fact that most imitations of Spielberg's RAIDERS OF THE LOST ARK have been pretty ghastly, at least it can be said that although this film does its fair share of RAIDERS-copying, JANE retains a sense of its own place in the history of pop culture.

Posted by Gene Phillips at 2:04 PM
Email ThisBlogThis!Share to TwitterShare to FacebookShare to Pinterest
Labels: exotic lands and customs (u), the uncanny