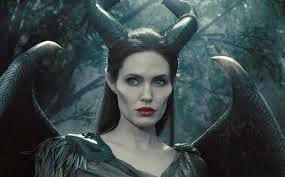 
I suspect that the roots of Maleficent's reformation probably run alongside those of OZ: THE GREAT AND POWERFUL-- to wit, the novel/stage play of WICKED, in which L. Frank Baum's "Wicked Witch of the West" was given a sympathetic makeover.  Happily, although OZ was a bore, saddled with a flat protagonist and an actor unable to overcome the script's limitations, MALEFICENT is more successful in its re-imagining.

I mentioned in my review of Disney's SLEEPING BEAUTY that the titular beauty's lack of a birth-mother is compensated for by "Maleficent and the Three Good Fairies subsume the roles of 'bad mother' and 'good mothers' respectively." This psychological division, only implicit in the 1959 film, becomes the film's central theme.

This Maleficent-- portrayed with acidulous charm by Angeline Jolie-- shares the familiar motif of "the Woman Wronged by a Man." Far from being an evil fairy with vague Satanic associations, Maleficent begins as a young wing-backed fairy who dwells in a fairy-haunted forest, far from the prosaic world of man. (I'll note in passing that the designs for the fairy creatures also far excel the dull imagery of the OZ film.)  In the innocence of her youth Maleficent meets an adventurous young man, Stefan, and becomes first his friend, and in later years, his implied lover, though no literal sex is indicated. By the time Stefan reaches his young adulthood, however, he's seduced by the allure of power. When the king of the nearby castle announces that he will deed his kingdom to anyone who can slay Maleficent-- who has refused to accept the tyrant's authority-- Stefan uses his friendship to drug Maleficent.  He shies away from killing her, but because he needs evidence that he has slain her, he cuts off her wings for his trophy. Stefan gets the kingship and the betrayed fairy-woman retreats into her magic forest, biding her time.  When Stefan and his barely seen wife conceive a child, Maleficent appears uninvited at the christening and lays an unstoppable curse upon the female infant Aurora.

In the 1959 film, three wise if somewhat dumpy fairies take Aurora under their tutelage to keep Maleficent from finding her. In this film, the three "good mothers" become three incompetent pixies, so scatter-brained that they can barely figure out how to care for their charge. All-knowing Maleficent finds their secluded cottage easily, where she is presented with a conundrum.  If the infant doesn't survive the clumsy care of the pixies, she'll never live to receive Maleficent's curse, and the fairy-woman will never be revenged on Stefan. Thus Maleficent, who starts out intending to be the murderous bad mother to Aurora, ends up fulfilling the duties of a good mother.

Much of what follows is fairly predictable: Aurora discovers the identity of her mysterious protector and responds to her as if Maleficent is a maternal guide-- which she is, insofar as Aurora is symbolically the child Maleficent might have had with Stefan.  I even foresaw that the "love's true kiss" that would awaken the beauty from her sleep would not come from Prince Philip-- a rather negligible presence in the story--but from Aurora's symbolic mother.  Still, thanks to the stunning design-work and Robert Stromberg's crisp direction, even the predictable moments are pleasurable.  It's perhaps inevitable that, since in the 1959 film Maleficent's nasty raven was an objective correlative of her evil, here the raven, name of Diaval, should be used for comedy relief. Still, his presence also foreshadows Maleficent's need for companionship, and makes her mother-love for Aurora more credible.  The film's weakest point is its villain Stefan, in that the reasons for his betrayal are inadequately explored.

HOW TO TRAIN YOUR DRAGON is a lot more predictable than MALEFICENT, but it too manages to make its visits to familiar places pleasurable.

Skinny hero Hiccup is the very incarnation of the alienated youngster: in the forbidding Viking town of Berk, he alone is aware of his culture's absurdities-- not only its almost total validation of relentless warfare, but also the fact that his chieftain father "Stoic" is the supreme representation of Viking manhood. Hiccup, a proto-nerd with a Jimmy Stewart-esque drawl, can't find validation in either the older generation or in his peers, all of whom accept without question the need to kill the dragons who constantly raid Berk's resources.

Hiccup then has a "pet-meet-cute" with an injured dragon, whom the youth names "Toothless." The two unlikely friends bond, though Hiccup must keep the relationship secret from his fellow Vikings.  In time Hiccup learns a deeper truth behind the dragons' raids-- a truth that exonerates them and paves the way for a rapprochement. More importantly, Hiccup uses his new dragon-training talents to tame other dragons in order to bring his fellow Viking-teens under his command, so that the Clever Youths can save the day when their Stick-in-the-Mud Elders cannot.

No wheels are reinvented here, but the dialogue is savvy and the CGI is lively.  No deep themes, just basic fun.
Posted by Gene Phillips at 2:48 PM
Email ThisBlogThis!Share to TwitterShare to FacebookShare to Pinterest
Labels: combative adventures, the marvelous