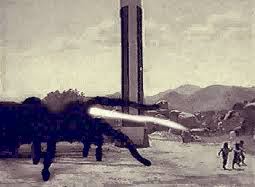 HAVE ROCKET WILL TRAVEL was the Stooges' first attempt to market themselves as film-stars, albeit for a juvenile audience, following the discontinuation of their Columbia shorts.  It was also the first film-outing for the last of the "new stooges," with Joe DeRita as "Curly Joe."

Since the films were aimed at juveniles, it's not surprising that the classic Stooges violence is dampened somewhat, though the aging comedians do recycle a few of their classic routines. This set the pattern for all the other films: these Stooges were foursquare do-gooders, no longer capable of pulling swindles or lusting openly after women.

In ROCKET they are maintenance men working for a small private foundation trying to launch a rocket to Venus, apparently with no government oversight. The foundation is run by Morse, a typical "heavy" older administrator who deems the three dopes to be lazy bunglers, but the boys take a shine to Ingrid, a young female scientist working to find the proper rocket fuel. Ingrid likes the Stooges because they remind her of her janitor-father, who scrimped and saved to give Ingrid an education.  The script is frankly approving of Ingrid's aspirations to scientific excellence, even though technically she never finds the right fuel; the Stooges both create the fuel and fly the rocket to Venus, albeit in their usual blundering fashion.

In addition, Ingrid is the subject of a "B-plot" in that a young male psychiatrist  named Ted tries to persuade her to pay more attention to him and less to her test tubes.  The romance-storyline is resolved quickly-- Ted wins Ingrid over before the Stooges even leave on their epic voyage-- so its only importance is to give the Stooges a typical "happy couple" to fight for, as against the nasty boss of the foundation.

Venus, of course, is a place of ridiculous aliens-- a talking unicorn, an evil robot brain, and a fire-spitting giant tarantula-- much in keeping with the outer-space beings the comedians encountered in their space-age shorts.  In a probably unconscious act of parallelism, the beneficent female unicorn roughly parallels the influence of Ingrid on the Stooges' lives, while the evil robot brain is closer in spirit to Morse. However, the robot brain-- which has wiped out the living beings who created it-- takes a liking to the Stooges parallel to Ingrid's affection for her displaced father-figures. However, the brain only wants to use the Stooges as models for robot copies of themselves, whose purpose is to keep the brain company. Once he's created the duplicates, he plans to get rid of the originals.

ROCKET is a fun romp, though the jokes wear a little thin in this longer format, and several sequences seem padded-- not least one in which the trio sing a little song as they explore Venus. This is probably DeRita's best outing in the Stooges movies. While it's quickly evident that he didn't share the comic flair of Curly Howard, DeRita works hard to impress the new audience, and certainly blends in with Larry and Moe better than his immediate predecessor Joe Besser.
Posted by Gene Phillips at 1:40 PM
Email ThisBlogThis!Share to TwitterShare to FacebookShare to Pinterest
Labels: the marvelous