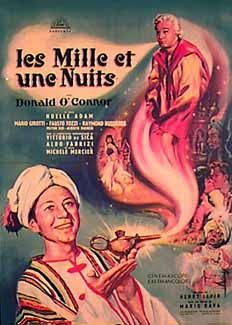 
"Guards! Torture these two men until they tell us of their plot! I'll torture the girl at home."-- evil vizier from THE WONDERS OF ALADDIN

As a kid I didn't care for this strange Italian-U.S. co-production, and my recent re-viewing of it did not much improve my opinion.  But it does have a few things going for it:

As the above line indicates, it is, far more than most Arabian Knockabouts, obsessed with the comic treatment of torture. The girl referenced above, name of Djalma (Noelle Adam), gets hung by her wrists while naked, and the doofus hero of the title (Donald O'Connor) is sewn into a wet animal-skin that is supposed to shrink in the sun and strangle him. Moreover, both Aladdin and his dumbbell sidekick Omar are captured by desert-dwelling Amazons, who plan to sleep with them once before killing and skinning them to make garments out of their flesh.  The evil vizier drops a victim through a trap-door to a pool full of crocodiles, and his court wizard creates a female robot who crushes anything she embraces. While the credited director was Henry Levin, and this review attests that Mario Bava's only contribution was second-unit work, the film's catalog of cruelties sounds like something scripted by the director of BLOOD AND BLACK LACE. Maybe all the Sadean elements stem from the five Italian writers credited alongside the one American scribe.

There's not much point in detailing the rambling plot, many elements of which are borrowed from the classic 1940 THIEF OF BAGDAD. In this essay I showed how the 1942 ARABIAN NIGHTS liberally swiped from THIEF in terms of plot-elements. WONDERS is too loosely structured to worry much about plot, but as it opens, O'Connor's Aladdin-- whose sole likeness to the folktale-character is that everyone in his town deems him a worthless dreamer-- has only one ambition: to behold the pomp of Prince Moluk (Terence Hill, several years away from his international success in the "Trinity" films).  This bears a slight resemblance to the ties between Abu and Ahmed in THIEF, but though Aladdin does ultimately rescue Moluk from the designs of his nasty, Jaffar-like vizier, the two never become best buds. Instead, the buddy-bonding takes place between Aladdin and Omar. The latter becomes Aladdin's virtual slave when Aladdin unintentionally unleashes the power of the magic lamp in his possession, though it takes the hero some time to figure out how to call up the genie (famed neo-Realist director Vittoro de Sica).  Thus Aladdin's preoccupation with the prince functions as a motive force that keeps the hero focused on doing something righteous with his genie's powers, rather than just conjuring up palaces and riches, as the character from the original folktale did.  The strangling-robot is another swipe from the 1940 film and its six-armed female automaton, while the climax, in which the genie helps Aladdin defeat an army's attack on the prince's city, is very probably borrowed from the ending of the 1924 THIEF.

Donald O'Connor works hard to inject his trademark energy into this bumbling genie-caller, but the comic bits are too derivative to be funny. 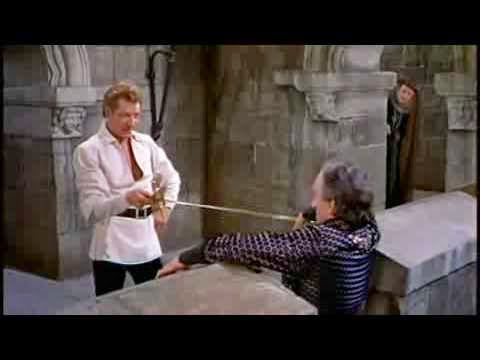 I have far less to say about 1955's THE COURT JESTER--because it's almost too perfect to criticize. While Hollywood made a fair number of swashbuckler-spoofs over the years, JESTER  is the best of these, and is also arguably comedian Danny Kaye's most aesthetically successful film.  Paramount Pictures spent $4 million to make JESTER look as sumptuous as the best of the "straight" swashbucklers, but for whatever reason the 1955 audience was not receptive and JESTER only courted bad box office.

Today JESTER may be the best-known film in Kaye's repertoire, combining the performer's propensity for fast-paced patter songs with intricate dance and/or fight sequences.  Kaye's character Hubert is one of many comic bumblers who aspires to be more like an admired hero-- in this case, the rather forbidding Black Fox, a Robin Hood-like figure who leads a covert rebellion against Roderick, evil usurper of the English throne. Hubert also aspires to impress the martial maiden Jean (a ravishing Glynis Johns),but the only duty Hubert can get is to care for the infant who will someday reclaim the throne.

In contrast to ALADDIN, which almost has no plot, JESTER is so intricately plotted that it's difficult to summarize. In fact, I can hardly believe that it was written by the same team-- Melvin Frank and Norman Panama-- that scripted the silly 1959 LI'L ABNER.  I can only assume that the collaborators warmed as never before or after to the ambition of their project: to send up almost every trope of the swashbuckler genre. Said tropes include the aforementioned child-heir, court intrigue and seduction, a joust between armored knights (which births the film's most famous schtick, the redoubtable "pellet with the poison" rigamarole), and a rapier-duel between the hero and the black-hearted villain (played by Basil Rathbone, arguably the most iconic swashbuckler-villain of Classic Hollywood).

This duel is possible only because of the film's sole metaphenomenal element: a "witch" (Mildred Natwick) who uses something like hypnotism on Hubert. While the hypnotic spell is in effect, Hubert becomes an unbeatable swordsman, and he comes very close to defeating Rathbone's skilled evildoer. However, the spell repeatedly fails and puts Hubert in increasingly hot water, so that in the end Hubert has to beat his enemy by trickery, rather than by permanently emulating the macho qualities of the Black Fox.  For this reason, though there's a substantial duel between hero and villain near the film's end, its effect is undermined by the comic turnabout. Therefore JESTER does not qualify for my term "combative comedy."

ADDENDUM: Upon rereading I must correct my assertion that the film has only one metapheomenal element. I entirely forgot to mention that the film does possess the "outre outfits" trope in that the Black Fox is a masked swashbuckler in the tradition of others mentioned here, particularly Zorro-- who like the Fox, sported a cadre of aides who donned rough approximations of his costume.
Posted by Gene Phillips at 3:19 PM
Email ThisBlogThis!Share to TwitterShare to FacebookShare to Pinterest
Labels: enthralling hypnotism and illusionism (u), outre outfits (u), superlative skills (u), the marvelous, the uncanny