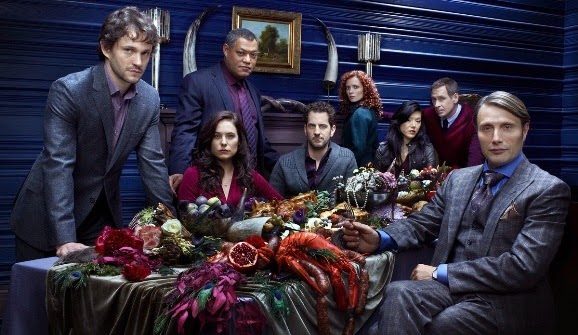 In an essay I wrote for my blog ARCHETYPAL ARCHIVE, I recorded these early thoughts on the series:

The 2013 teleseries HANNIBAL-- which will air its season finale the Friday after I write this-- comes much closer to the mark. The series' conceit is to trace in greater detail the events of the first encounters of Lecter and his nemesis, FBI  profiler Will Graham-- encounters that were only sketched out in the Harris novel and the 1986 film. The film, directed by Michael Mann, conveys a keen sense of the extent to which Graham has been polluted by the disturbing power of the godlike killer, which he witnesses first in Lecter and later in "the Tooth Fairy."  However, at no time is Graham himself a "psycho." He is, in the end, a figure like Holmes is in STUDY IN TERROR, a man capable of intuiting the thought-patterns of killers but not a "perilous psycho" himself.
The teleseries' version of Graham is far more ambivalent. Even though the internal continuity of the Lecter story establishes that Graham will take Lecter prisoner and go on to pursue the Tooth Fairy in later years, producer Bryan Fuller creates a mood of baroque pessimism that implicates all of the characters, not just Graham, in Lecter's insanity.  Not every episode culminates in a literal combat, though some stories establish that Hannibal Lecter can kick ass on a Jason-esque level of dynamicity. But on further examination of the completed series, I may come to the conclusion that Fuller's version of Lecter and Graham is not "sanity vs. insanity," but "psycho vs. psycho."


Now that I've thoroughly reviewed Season 1 of HANNIBAL, paying closer attention to the way the series depicts the Will Graham character, I do think that the teleseries version of Graham is just as much an "uncanny psycho" as Lecter is, though of a philosophically opposed type. Graham becomes mentally unstable because he possesses an almost unique ability to empathize with anyone-- including serial killers-- for the purpose of apprehending them.  Lecter, in contrast, empathizes with no one; he sees all of his victims, real and potential, through a veil of clinically analytical, god-like indifference.  Little by little Season 1's episodes show how Lecter becomes fascinated with his opposite number, and even considers Graham to be the closest thing he might have to a "friend"-- not because Graham would ever approve of Lecter's bloody exercises, but because he would have the ability to comprehend Lecter's own assessments of himself.

I have immense respect for the way Bryan Fuller and his collaborators have translated the Hannibal myth into a series which shows a refinement equal to Michael Mann's superlative MANHUNTER, to say nothing about how the series outclasses a dozen faux-artistic "streaming original" teleseries. I don't have time to dwell on each individual episode's particular merits, though, and so I'll pass on such detailed analysis.  I'll simply conclude by saying that although I think Graham makes an uncanny opponent to "focal presence" Hannibal, the teleseries does not attain the combative mode. As in MANHUNTER, Graham does not seem to be capable of matching the mesmerizing power of "Hannibal the Cannibal." Though he's fated to bring Hannibal to justice at some point, I theorize that if Fuller follows the pattern set by Mann-- and by Thomas Harris-- Graham's triumph will not be a mythic clash of titans, but a victory Graham wins by the skin of his teeth.
Posted by Gene Phillips at 2:41 PM
Email ThisBlogThis!Share to TwitterShare to FacebookShare to Pinterest
Labels: perilous psychos (u), the uncanny