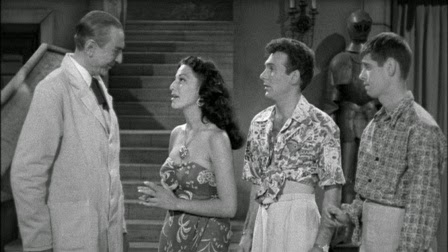 
Despite the high billing of Bela Lugosi, this strange little film was all about translating the nightclub act of Duke Mitchell and Sammy Petrillo to the cinema. Mitchell and Petrillo, banking on the latter performer's striking resemblance to Jerry Lewis, had already patterned their act on the popular team of Lewis and Dean Martin. Unfortunately, though a fair number of Martin-Lewis films are still enjoyable today for their wit and chemistry, this solo outing for Mitchell-Petrillo doesn't even come up to the level of the contemporaneous "Bowery Boys" episodes, many of which had been written by GORILLA's writer and directed by its director: Tim Ryan and the prolific William Beaudine, respectively.

Mitchell and Petrillo, portraying two nightclub performers with the exact same names, get stranded on a Pacific island, where they are befriended by native beauty Nona (Charlita).  Nona gets romantic with the handsome singer Mitchell, while Petrillo has to contend with the attentions of her "little sister" Saloma (Muriel Landers, who is only "little" in terms of age). Nona also happens to work for a scientist on the same island, and she introduces the boys to Doctor Zabor (Bela Lugosi), in the hope that the doctor can help the fellows get back home. But, in keeping with many of Lugosi's other mad scientists, Zabor sees the two guys as fresh guinea pigs for his experiments in evolutionary alteration. This eventuates in Zabor transforming Mitchell into a "brooklyn gorilla."

GORILLA is never amusing, and Lugosi doesn't get even as many decent lines as he did in his Monogram mad-scientist outings. For me the film's main interest is that while it could easily be a standard mad-scientist comedy, scripter Ryan chooses to bring the film to a tragic climax-- Zabor tries to shoot the gorilla-ized Mitchell, and Petrillo dies saving him-- and then reveal that "it was all a dream," thus putting the film in the same "delirious dreams" category as more famous works like the 1951 ALICE IN WONDERLAND. It's not surprising that the dream should be that of the goofus character Petrillo, but it's a little odd that when he wakes up, he really doesn't recognize anybody as their true selves-- for instance, Lugosi's Zabor is the boss of the duo's nightclub act.

I should note that though I'm not an advocate of "queer theory," in which films are interpreted as revelatory of gay-friendly themes, I've seen this approach used on the Martin-Lewis films, and it probably applies about as well to BROOKLYN GORILLA.  After all, doesn't Petrillo sacrifice his life to save his gorilla-buddy? Hmm-- but it also has the same guy "waking up" from this gay-friendly dream to meet the real-world amours of Landers' plus-sized woman, and more or less getting won over by her charms. Oh well.

Posted by Gene Phillips at 4:26 PM
Email ThisBlogThis!Share to TwitterShare to FacebookShare to Pinterest
Labels: delirious dreams and fallacious figments (u), the uncanny